And then she was gone

Perhaps some of the cheers were from people glad she was gone, who knows? 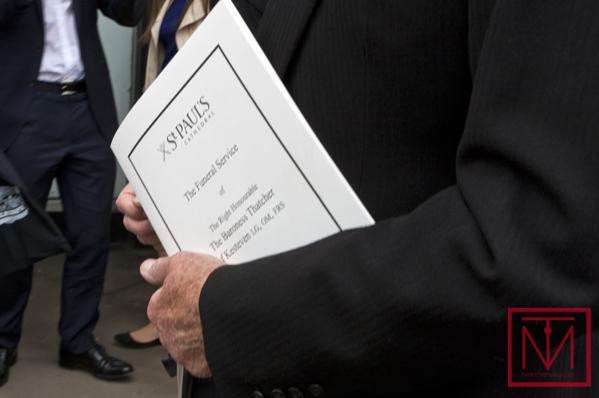 I grossly underestimated the turnout for Margaret Thatcher’s funeral.

My blasé attitude to the whole thing and lack of attention to the media led to me being very mistaken indeed, lulled into thinking I would sit nonchalantly in a coffee shop with a strong Americano and a pastry, amble up to St Paul’s, grab a few monumental photos from the front of the police barriers and mosey on back home.

After carrying out what I thought would be purely a recon’ mission, I found myself surrounded by the enemy: squashed up in the middle of a huge crowd like a proverbial sardine. There I stayed, squished, for nigh-on four hours. Not my kind of rock ’n’ roll, baby. I found myself wistfully looking over at the iconic red telephone boxes on the other side of the sealed off road, imagining myself on top of them, straddling the two like a rock god whilst wildly snapping away. It would be the Diana funeral all over again.

But it wasn’t to be, I’d gotten myself stuck and that was that. Eventually I managed to extract myself from the throbbing horde that had literally swamped the streets of London town. I emerged back in to the sunlight, slightly cramped with a handful of crappy pictures, sweaty underarms, a bursting bladder and the very strange feeling of having witnessed a great piece of British history. 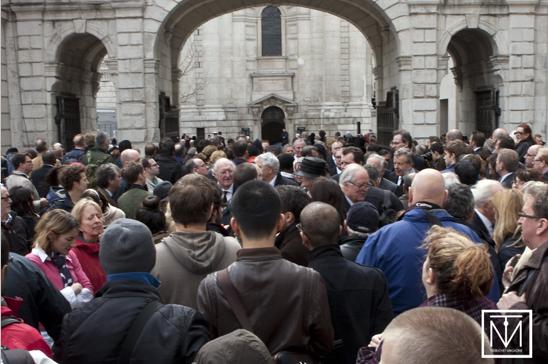 This rather odd feeling was certainly not something I had expected, it left me puzzled and was cause to seek out the earlier missed Americano. Don’t judge me now, I confess I voted for Maggie once, it’s true, but I was never a Conservative. Margaret Thatcher reminded me of my Mum in a weird sort of way and, like a mother does, she would always be telling us things were going to be alright.

Also, I always thought she had really great hair and as a fan of the bouffant, I guess I voted for her hair. I also never struggled under the Thatcher regime as a young man like many others did. I was happily walking in and out of jobs and generally whooping it up (look where it’s got us now). However, like many other British people I was a victim of her poll tax, it angered me and it angered many others too, and with that anger we watched her fall from grace.

For many of us, it wasn’t the fact of wanting to get rid of Maggie, but more the case of just wanting to abolish the poll tax. Apart from feeling very happy I no longer had to worry about my poll tax court summons anymore, I must say that Thatcher being ousted didn’t really affect me one way or the other. I had my own slant on politics and having the knack of not being able to keep my gob shut, I often paid a heavy price for airing my views. Mostly I was just having a damned good time. 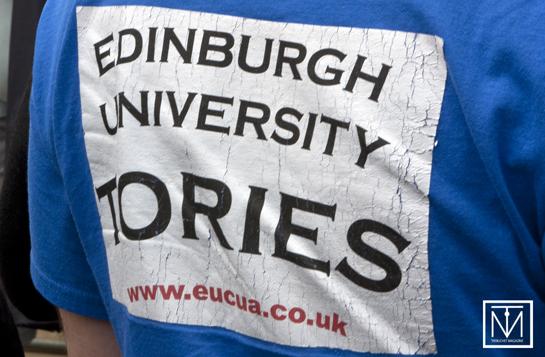 So standing watching Margaret Thatcher’s funeral afforded some time for reflection, in a way it was like watching a little piece of my youth being laid to rest. Perhaps the occasion was tweaking at my own personal losses and possibly stirring up feelings of my own mortality, rather than stirring up any political niggles I may or may not have.

I looked for the protesters but barely one could be found, at least not where I was standing. Shame really, because protesters always make for a good shot and it would have more than made up for the lack of funeral pictures. I found a token V for Vendetta maskwearer who seemed out of place, and I could also see one or two trade union t-shirts. That was about it.

I think it’s fair to say the overall feeling amongst the majority of the vast crowd was very much one of sadness. When our mask-wearing friend started to raise his voice the crowd immediately shut him down, they wanted respect and they told him so. There were no eggs thrown at the gun carriage as it passed by and no hisses or boos as I had expected. The only things I saw being thrown were flowers and the only things audible were the solemn toll of St Paul’s bells: the military band playing the funeral march, and applause and cheers from the crowd.

Perhaps some of the cheers were from people glad she was gone, who knows? It was by and large a very respectful and peaceful occasion.

A slow reflective retreat toward the underground station found my eagerly awaited coffee and the promise of a hot cheese and onion slice. Lifting the cup slowly to my lips, my protruding elbow was nudged by a passing shoulder sending a good proportion of the black nectar to the floor. The word ‘wanker’ left my mouth all by itself, it was on autopilot as usual. I turned around to see what twat had knocked into me only to see the side of a tall elderly gentleman who obviously didn’t care and was blissfully unaware.

In a moment of recognition “Michael fucking Heseltine” almost blurted out but I stopped it, rightly or wrongly. It was Michael Heseltine, one of the people responsible for thrusting a dagger in the back of the very person he had just seen laid to rest. A man now in his eighties, he still looked quite imposing, although at this particular time he looked dithery and slightly lost. 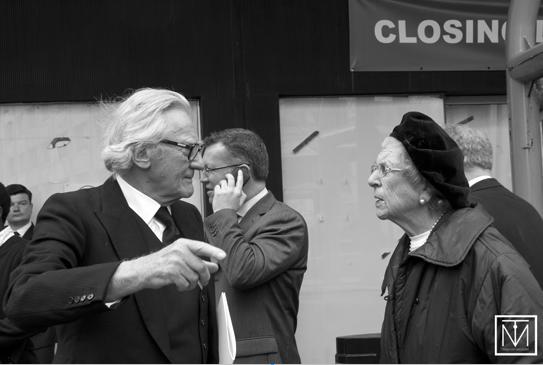 Instinct took over and I dumped the remaining coffee and grabbed at my camera bag. Heseltine was clearly disoriented, resorting to asking people for directions. Taking advantage, I hastily salvaged my wasted morning and wasted coffee with some snaps of the confused Michael creature. I was settling for second best, but an amusing end to events arrived with Baron Heseltine looking like he didn’t know what day of the week it was.

On this day of all days.