Carl Heap’s style has always invited some form of audience involvement, In the past, this has extended to the gentle conscription of audience members for selected moments and scenes – helping to explain football formations in World Cup Final 1966 or, in A Progress, making a journey happen.

A Progress is a seriously playful revisit of The Pilgrim’s Progress by John Bunyan (1678). The Yard Theatre in Hackney Wick, a mere javelin’s throw from the Olympic site, gives a resonant location to present a classic story of an obstacle-strewn journey to a finishing line. 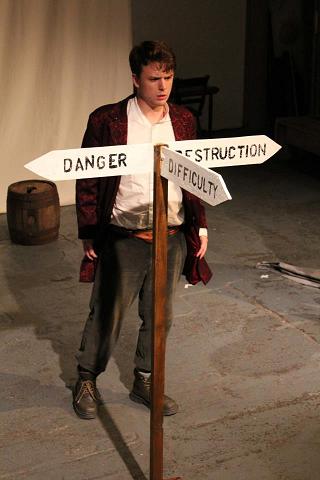 An early steeplechase? The Pilgrim’s Progress – the dream of a 17th Century jailbird – is a dramatic adventure story, asking the questions that human ‘progress’ never quite satisfactorily answers, like: What in heaven or hell’s name am I doing here?

[box] Never shy of tackling the impossible or the improbable…[/box]

Bunyan was selling salvation – this production is selling an evening’s entertainment with songs, music, laughs and spectacle. The Pilgrim’s Progress presents one of those adrenalin-stirring challenges of staging what seems to be unstageable.

What is allegedly the second most read book in the world (never out of print) deserves examination. The source book is riddled with theatrical opportunities: the Slough of Despond, the Museum of Wonders, Vanity Fair. 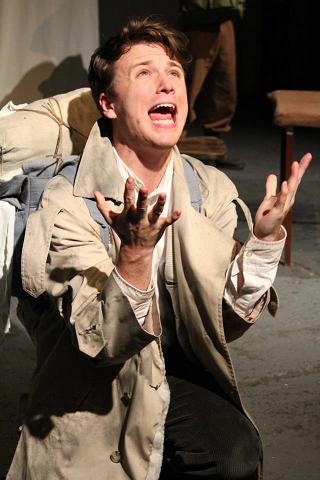 The story, told by a versatile core cast of actors and musicians, builds on the strong background of writer and director Carl Heap who loves to interpret difficult texts. A lot of the stories he has tackled seem to be about journeys: Jason and the Argonauts, The Ancient Mariner, Stagecoach, Everyman and Peer Gynt.

Now, his newly-founded company Beggarsbelief ventures into the thorny territory of religion. But his interest is all-round, reaching atheists and people of faith, fundamentalists of every stripe and the massed ranks of not-sures and non-committals.

Carl Heap’s style has always invited some form of audience involvement, In the past, this has extended to the gentle conscription of audience members for selected moments and scenes – helping to explain football formations in World Cup Final 1966 or, in A Progress, making a journey happen.

His writing is fabulously made flesh by actors. Saying so, the physical immersion of the audience within the action creates a production that provides a compelling and deeply engaging experience. Its time to be amazed by theatre again. 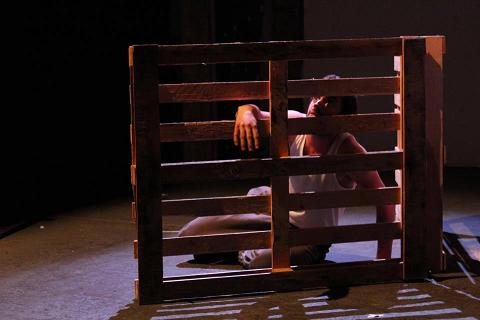 Come and take offence, sit on a fence, wince, whinge, cringe, judge, begrudge, and trudge alongside our bemused, bothered and bewildered protagonist as he wades into the Slough of Despond, does battle with the Giant Despair and goes shopping in Vanity Fair.