A Handful of Dust (Whitechapel Gallery)

All we are is dust in the wind. Whitechapel Gallery retread the inestimable wisdom of Kansas (and T.S. Eliot)

“I will show you fear in a handful of dust” — T.S Eliot

A Handful of Dust takes form in a collection of works by Surrealist and Conceptual artists combined with a variety of artefacts ranging from newspapers, postcards, and forensic photographs to small boxes containing dusty cloths. Artist such as Man Ray, Duchamp, Jeff Wall, Gerhard Richter, and Nick Waplington, stand side by side with Google Maps screenshots and prints worth £8, all carefully threaded together by curator David Campany through the motif of dust.

At the core of the collection stands Man Ray’s photograph of the dusty surface of Marcel Duchamp’s ‘The Large Glass’. Duchamp was at the time allowing dust to collect in his New York studio in order to utilise its thickness as a measure of time. Although Man Ray’s photograph was initially intended to serve as documentation of Duchamp’s work, it took a life of its own after being published in the Surrealist journal Littérature captioned “view from an airplane”. The false title’s manipulation of viewers’ perception transformed it from documentation to surrealist photography, allowing for its reconstruction and reinterpretation throughout time. This image, which was renamed and republished in different forms and finally titled ‘Elevage de poussière’, was symbolic despite the original lie, drawing into question whether the photograph’s true context matters.

Photographers and writers have been influenced by the ambiguity of the photograph to this day, which allows for its translation and application onto different areas of life. A Handful of Dust begins with the complexities raised through this simple image, offering more angles on dust than you could possibly anticipate. Photography is the prevalent medium used to preserve this otherwise delicate substance, symbolic of decay and erosion, remains, death, and natural disasters.

Robert Filliou’s work raises the question of the ability to conserve dust in a piece containing a series of cloths which have been used to dust off paintings from the Louvre. The opened boxes containing the dirty white cloths are displayed in an acrylic display case, conveying the idea of preciousness and vulnerability of the piece, which if exposed to dirt form other objects would lose its value. Inevitably, the cloth has been contaminated in past journeys and conservations, yet the form in which its presented constructs an idyllic situation which the viewer accepts as true.

Filliou humorously argued that by wiping the dust he removed the aura of the paintings and would have the ability to transfer it onto other works. Yet, without transferring the invisible dust onto a different painting, value has been given to these otherwise worthless cloths. Nevertheless, polaroid photographs on the boxes prove the requirement of photographic as indisputable evidence of the performance; the dust on itself is not tangible enough.

Robert Burley’s ‘Implosion of Buildings 65 and 69, Kodak Park, Rochester, New York [#1]’ shows a Kodak factory being demolished as the rise of digital photography reduces the company’s popularity. Workers of the company watch the dust explosion and, ironically, record it on their phones and digital cameras. The curator’s thoughtful consideration between dust and photography and their effect on each other rather than simply one as a means to portray the other, is apparent in the selection of such images.

Jeff Wall and Gerhard Richter appear in a different form to the one they are better known for. Jeff Wall’s photographs are black and white close ups of rugged rocky surfaces, without his famous back light boxes. Gerhard Richter piece is a collection of 128 photographs of an unknown painting, similarly black and white close ups. Importance is given to the microscopic as the essence, contrasting with the aerial views taken from World War II airplanes and satellites. 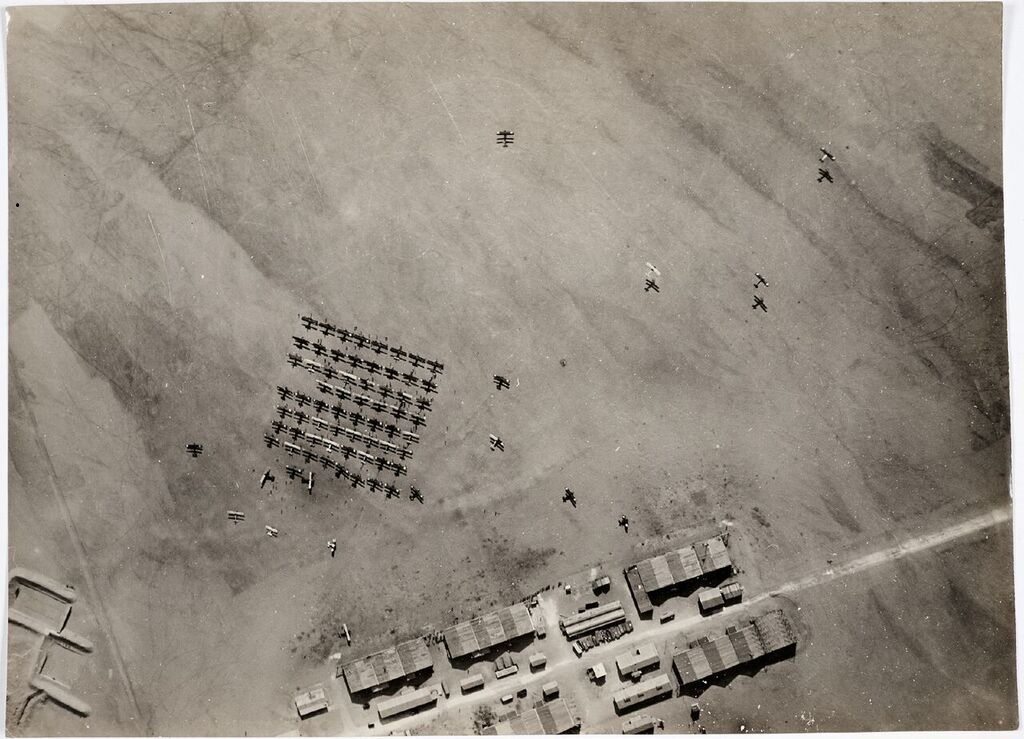 Military captures and deserted terrains are reminiscent of Man Ray’s ‘Elevage de poussière’. The reliability of these documentary photographs is thus called into question due to their easily manipulable nature. War reappears in the excerpt from the anti-war film Hiroshima Mon Amour, where two lovers blend into each other, their skin shifting from flesh to dust as they embrace. The strikingly resemblance of the actors’ skin to dust encourages the viewer to understand the microscopic substance as essential to everything around and within us.

The piece that feels most relevant to the modern day is John Gerrard’s virtual reality film constructed based on an algorithm. The result is a constantly changing and self-producing video. The slowly moving desert overtaken by a sandstorm is never exactly the same, addressing the recurring notion of transformation. Walk Evan’s ‘Erosion, Mississippi’ dated almost a century earlier immortalises the ever-changing movement of sand and earth. Despite the stillness of the photograph in contrast with the virtual reality representation, the choice of subject appears as something ever-moving.

The last section of the exhibition reveals the source of the booming sound in the background: a film where moving trees show the eery peacefulness of a region shortlisted by the Americans for an atomic bomb attack. Moving away from the literal portrayal of dust, the short video extrapolates the exhibition into the optative.

Although David Campany argues curators should step back and “get out of the way” of the work itself, his personal interest is clearly shown through the meticulous selection of objects and images, guiding the viewer into a specific route throughout the subject. The works themselves work differently than they would on their own, yet the collection as whole provides an original and interesting open-ended narrative.

A historical and even archeological aspect is present through the presence of the curator in the exhibition, taking the viewer from a picture of dust in an artist’s studio to NASA’s images of Mars. The collection serves a sample for the microscopic interconnect-ability of art, science, war, politics, and generally any aspect of existence.

2 Replies to “A Handful of Dust (Whitechapel Gallery)”