Trippy, doomy, and laden with riffs, Voice of the Universe veers from melodic to hypnotic with alarming ease. Album review

Do we know which metal sub-genre is most prevalent in any particular country?

From experience, Ukraine seems to be a hotbed for black metal and doom metal, be it one-man projects or hybrid fusions of both aforementioned genres. One such is the experimental, psychedelic, pseudo-progressive doom laden outfit Ethereal Riffian.

Formed in Kiev in 2010 the four-piece, in their own words, claim that their purpose is to compose and bring to life unconventional music designed to expand the listener’s musical perception, signposting them to the existence of a subtler plane, the laws of which, if understood, may help them to perceive reality on a new level.

Look, we understand the power of music and how it can expand your horizons, lead to inspiration, moments of enlightenment and sometimes epiphany, but this message and purpose is rather ambitious. Still, it seems like the Ukrainian doomers have honed their craft to act as a launch pad for such an experience. So, let us take a trip to their ‘Youniverse’. 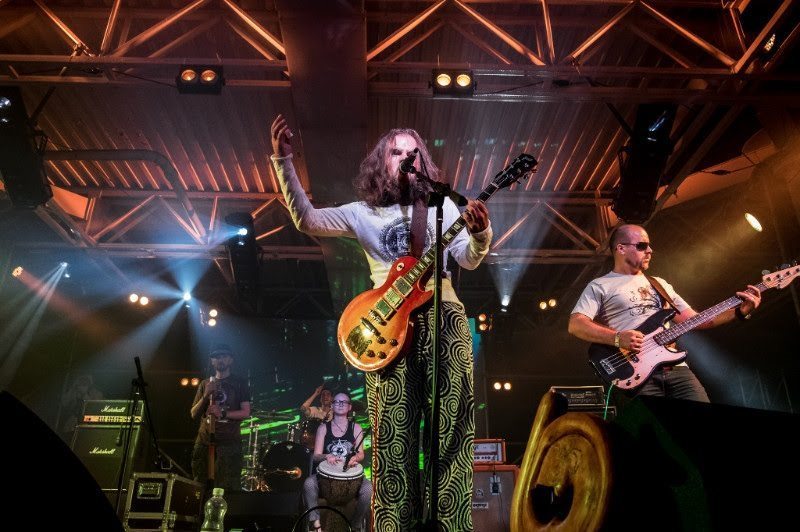 From the first few seconds of opening track “Sword Of The Deathless”, the swelling cymbal clashes and swirling samples create the vast soundscape which we are set to explore. With an almost ambient effect it grows in volume and presence, settling you down in time for the monk-like vocals to come in with a real presence and drone-like quality. This shifts towards a more exotic sound as the djembe percussion and didgeridoo joins in, coupled with bright sounding clean guitar passes to give a real tribal feel to it.

Drawing you in further, the swirling didge, along with the chanted vocals has a hypnotic effect and as the intensity grows, it explodes to life with a ringing fuzzed-out distorted jolt of guitar. Thankfully. Pounding drums, deep and rich bass and the guitars actually combine wonderfully with the didgeridoo and it’s almost like this is the signal to begin the exploration. With expressive guitar leads which have a lifting effect, the atmosphere created is truly captivating and in one way, it feels like it is catapulting you towards something, but the abrupt stop is like a crash landing, dropping you into a vast sonic expanse just begging to be traversed.

“Beyond” is where some similarities to other artists begin to become more prominent. With its thick drone-like distortion rumbling along, you can draw parallels to legendary stoners Sleep, who are arguably one of the most influential bands in the doom genre. With the massive sound and psychedelic tints, it really prompts a surreal feeling, but that doesn’t last for long as an explosion of energy shifts it into the territory of Tony Iommi (godfather of all that is riff and metal). With a big headbang feel to it, the rawness and intensity comes through. Like trudging through murky swamp undergrowth, the resistance formed from the doom-laden riffs is only broken up by spectacularly slick bluesy influenced lead spots which breathe life into the riff fest. As it shifts pace to monolithically slow and crushing to fast and energetic with well-placed build and transition sections, it ends on a high with an energetic riff reminiscent of ‘Dragonaut’ (by Sleep) with some wonderful lead work bringing this leg of the journey to a close.

“Thugdam” keeps up the doom laden riffs brimming with power. The spectacular tone from the chugging guitar and bass, combined with the solid work of the drums laying out some Tool-esque hypnotic polyrhythmic patterns gives another climactic build. Big sounding riffs ripe with melodic hooks litter the verses and the way these combine with the hazy chants give it a surreal edge. Those Iommi-style riffs return with the hypnotic undertone to them and the lead work has a dark quality to its melody, leading you further along the vast sonic soundscape before finally releasing you from its clutches.

Halfway through the track, it eases off, allowing you to get your bearings and, before you know it, the hypnotic swirling drone of the didgeridoo returns, pulling you away again and forcing you to surrender to its bowel-gripping vibe.

“Wakan Tanka” brings a lot more experimental and psychedelic qualities to the album and could very well be the sound track to a Native American vision quest as it relaxes you enough to lead to a new awakening before exploding to life. With a growing intensity, backed up by some complex Tool-styled drum patterns and the chaotic whispering vocals and guitars dancing across each other, it has so much going on all at once it’s impossible to take in on first listen. With some great headbanging doom riffs which carry an extra progressive metal edge to them, it really is an epic track. Spanning twelve minutes and rising and falling through varying sections of intensity and complexity, it shifts from surreal to full-on melodic hard blues rock to Black Sabbath-worshipping riff mastery – before the convoluted and captivating ending which mirrors that First Nation feel which brought the track in initially.

Keeping with the epic length, “March Of Spiritu” follows on with the experimental and psychedelic qualities. Samples grow in volume and with quick bass pulses, the drums become more complex and the samples begin to ripple, giving a chaotic edge to the track. Hypnotic clean guitar lines begin to work their magic across the melee as the pace and intricacy picks up. Instead of exploding into energy and chaos, the track instead subtly shifts to a colossally heavy, fuzzed out verse with hazy vocals veering towards the trance-like. Full of atmosphere, birthed by the harsh growled vocal whispers and hooking lead, the track blends the massive sound of doomy riffs and exotic melodies to spectacular effect. The explosion of energy teased at earlier does come, before it ultimately slows down into a more ominous bluesy section, then finally comes back to the complex and hypnotic drum section.

After two intense musical experiences, “Voice Of Reason” is a much welcome breather. With a more rock and roll styled feel – fast paced and energetic like some of the livelier tracks from The Melvins – this track has a fun feel and a bright sound. Hazy vocals and classic stoner-doom riff work make up the majority of the track with 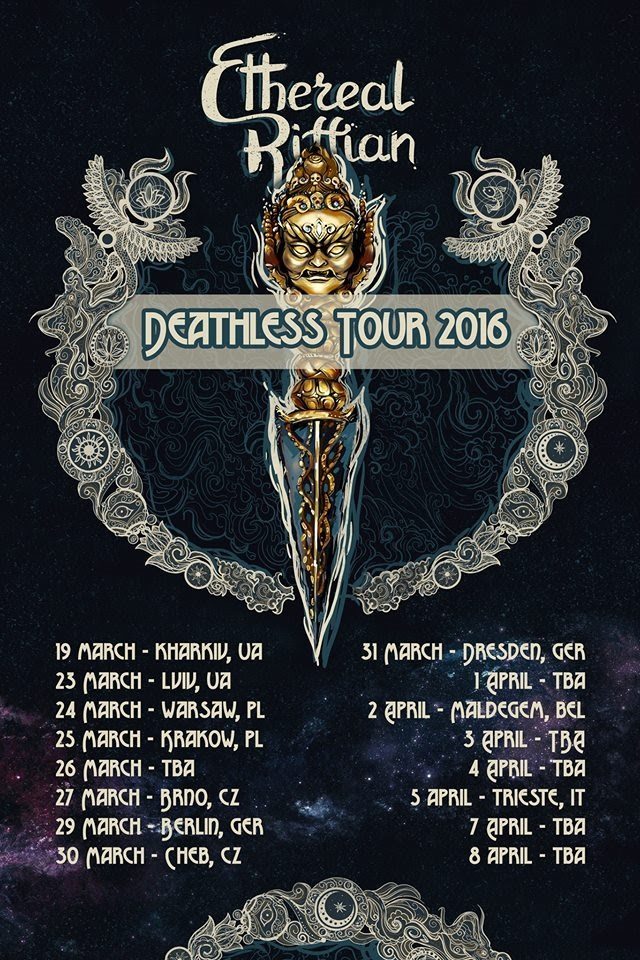 shifts into a slower, heavy guitar chug section with a hammering delivery, and the lead work is sublime.

“Anatman” takes us back to the unsettling psychedelic composition. Swirling samples, accompanied by the mesmerising drone of the didgeridoo, trippy cymbal clashes and subtle clean guitars all give an extra edge once again. With a very ambient feel, bordering almost on Pink Floyd territory, melodic guitars lick and clean arpeggios ring out, building the suspense as the multi-layered guitar approach teases at something big looming on the horizon. A bluesy lead backed up by some tight drums and a warm bassline sounds brilliant and serves as a great counterpoint to the ominous atmosphere created by the samples and didgeridoo. Getting harsher, the growled vocals and descending feel slips back to a clean based drone with hypnotic, semi-tribal styled drums and intricate guitar fills which seem to flow independently to the rest of the track. With huge presence and massive noise, it repeats this switch from thunderous feel to unsettling ambience several times more before swelling to a slightly frantic and sudden end.

Closing track “Drum Of The Deathless” comes in with a lively drum intro and some more guitar fills. The deep bass and didgeridoo create the rumbling backdrop to the drum driven chaos and this is joined by another exotic sounding lead melody which dances between being in and out of key to great effect. The intensity kicks up as it distorts to incredible levels and the hazy vocals come in with dramatic effect, slipping in and out of the animated chant and harsh growl with minimal fuss. Like a maelstrom engulfing everything and smashing it into itself, the chaotic and unsettling feel of this track really brings the album to an incredible close.

In all, Youniversal Voice is a terrific slice of mind-broadening music. The fact that the album is also a live recording, as highlighted by the audience reactions at the end of each track, demonstrates just how proficient Ethereal Riffian are at delivering this style of music which has an impact both psychologically and emotionally. Beginning subtly, luring you into the vast world it details; dragging you through the darkness, the rifts, valleys and mountainous sounds, it allows ample time to reflect as well as to allow total surrender to it.

This is an album which takes time to understand. Even after repeated listens, there are more facets to find in its melodic doom grooves and hypnotic ambience. For those who like their music physiological, emotional and psychological, Ethereal Riffian is highly recommended. Though it may only be February, I throw caution to the wind and surrender all logic to claim that, right here, we have one of the essential releases of 2016.

Next Story:
Keep Those Leg-Hinges Smooth and Silky with Knee Botox