I
t’s a nice idea, but where’s the Iberian ham industry going to lay its hands on a pile of Magnetic Resonance Imaging scanners?

Those things are specialised equipment. Medical grade shizzle. They don’t just pop up on e-bay.

Not unless you had a health service somewhere being sold off piecemeal by arrogant majority-government till-grubbers with no regard for ethics, traditions, social cohesion, public property or long-term national benefit, and who’d be willing to upheave decades’ worth of societal progress in return for the paltry trimmings of political power and greasy brown envelope kickbacks.

Researchers from the Meat and Meat Products Research Institute (Instituto de Investigación de Carne y Productos Cárnicos – IProCar) of the University of Extremadura have developed a non-destructive, innocuous method using magnetic resonance, computer vision and statistical calculus that enables one to quantify the salt content of Iberian ham, and classify it according to the degree of penetration of the salt in the muscle. In this way the diffusion of the salt can be monitored during the ham’s maturation process. This novel methodology is based on the analysis of images obtained through magnetic resonance, followed by analysis of these images using computer vision algorithms and treatment of the information by data mining.

The salt (sodium chloride) content of the cured ham influences the product’s sensory characteristics, texture and flavour. But salt is also a very important parameter from a technological viewpoint, as it is impossible for the maturation process to be conducted without the intervention of this substance. As a result, the conditions of the maturation process must be adapted to the salt content. Salt reduces the activity of water, inhibits the proliferation of micro-organisms and favours the formation of a meat gel. “Manufacturing ham with a very low salt content involves a high technological risk, as it may present significant defects, making it impossible to market in many cases”, explains the researcher, Teresa Antequera.

Up until now the meat industry only had destructive methods at its disposal to determine the salt content of ham. These methods are also longer and more expensive for producers. Which is why the work of the UEx researchers is geared towards developing non-destructive measuring methods which enable one to classify, monitor and predict salt content during the maturation process of the ham. 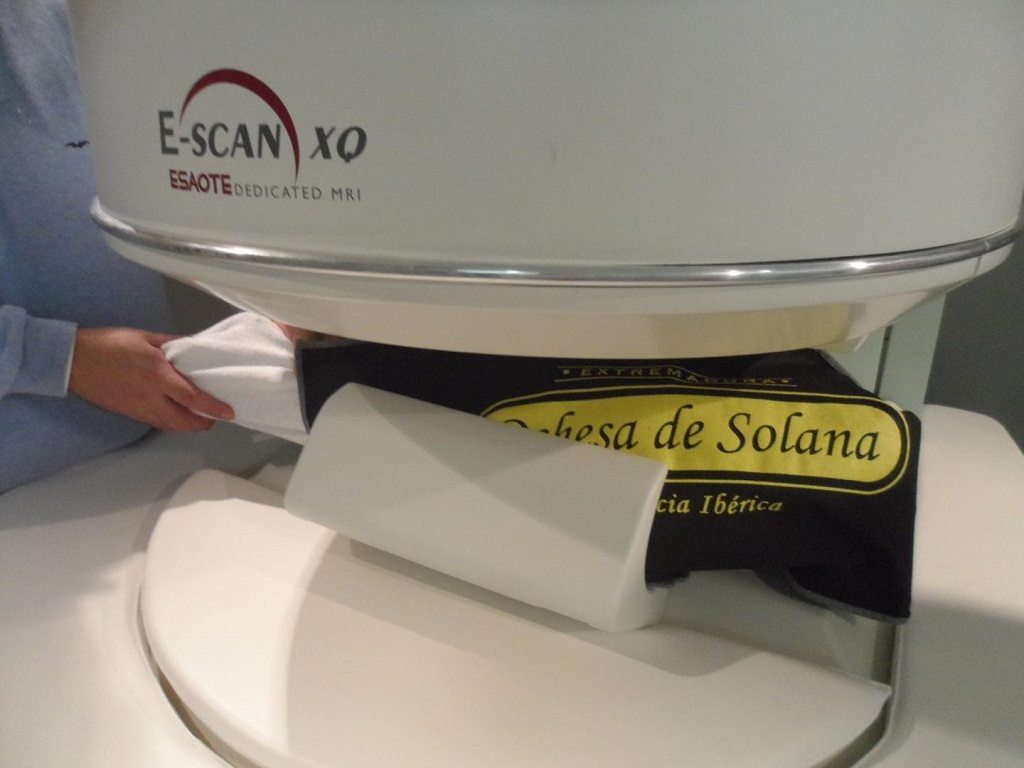 With this new methodology developed by the UEx and offered to companies through the Innovation Service for Products of Animal Origin (Servicio de Innovación de Productos de Origen Animal — SIPA), the food industry now has an efficient, non-destructive method the results of which are available practically in real time. “We believe that this technique could be extremely useful for the food industry as a form of quality control, because it enables one to determine the evolution of the salt during the maturation process of the ham without taking samples at different times. And it can also be applied for measuring the levels of fat, humidity, colour and other quality parameters in a meat product”, says Teresa Antequera.

“After viewing the images and using the texture algorithms — which enable one to objectively define what the image is like — we extract the data and information that we process using data mining techniques in order to classify and predict the salt content”, adds Daniel Caballero, a member of the Food Technology Group.

Data mining refers to a series of processes from the field of Big Data and Knowledge Discovery that allows for the exploration and extraction of information and knowledge from a large volume of data which are initially hidden and cannot be treated with traditional techniques. “In this study we have used two classification techniques: one based on association rules and another on decision trees, and two prediction techniques: isotonic regression and multiple linear regression. These techniques allow for statistical calculations that provide us with results quickly and effectively”, Caballero points out.