We are in collaboration with the artists. Where work is subtitled we begin to demand the presence of a voice and find ourselves clutching at headsets for dear life. We begin to translate our familiar into the other. We now speak other.

‘Word. Sound. Power.’ at the Project Space at Tate Modern brings together a range of artists working across creative media. Through audio documentary, text, video and performance they investigate the voice as a means of self-representation and protest.

So much would appear to depend upon the games language plays in the way that we interpret words and then read the world. We feel secure within the differences that grammar, diction, accent and emphasis create to determine how to respond to people, places and cultures.

Iconoclasm is stamped in the punchy declarative tones that we usually associate with these words. They are a verbal assault, each announcing a mastery over the space that they inhabit. Egocentric words.

‘I invite you to embrace ‘nonsense’ as resistance and to comb out utterances from your subconscious, thereby giving voice to all those moments that exist but are not realised or lived. These are poems for you (and me)- by you (and me).’

Is rather what we encounter as we enter the ‘Project Space’.

A disembodied voice reverberates around the glass frontage of the exhibition. It is reading the poem ‘Voice’ by Caroline Bergvall, printed on the back of the exhibition catalogue. It does not divulge what the ‘that’, to which it refers, is. The voice, given presence by the window, is on the threshold of physicality- the brink of becoming body. The words are on the threshold of physicality- of falling apart unless they are given voice, unless they are summoned.

The space beyond echoes with an indefinable chorus of voices, emanating from pockets of visual text and film screens. Despite the initial cacophony, as you wander through the space each pocket of ostensibly unassuming work draws you into an immersive bubble of experience. We drift in and out of the voices. Time passes. We do not notice. Time is only a word.

The tumultuous stomp and roil of b-boy crowds in India, draws us in as we walk through the doors. Even though we are watching a screen, the recorded event hits us harder than any performance ever could- there is no affectation here; only raw determination, a ritual, a claiming of the right to self-assertion.

There is a unity between the works in their positioning of the viewer at a vantage point within the narratives. Whether it be through camera angles, a direct invitation, a lyrical gaze which dances between subjects or a physical placement, as if watching a documentary in the shoes of the people from that culture.

The proximity of the camera to the events has a strangely disorienting effect. We are at once within the action yet totally removed from it. Reminded of our position as outsiders to this event, we stand somewhere between participant and observer.

We encounter a close cropped face of an elderly man. His skin is tanned leather. His slow, methodical drags on an endless cigarette stub, punctuate words resonating with the patience and power of mountains; his presence is massive, dragging us into the centre of his words, the sound of his voice. 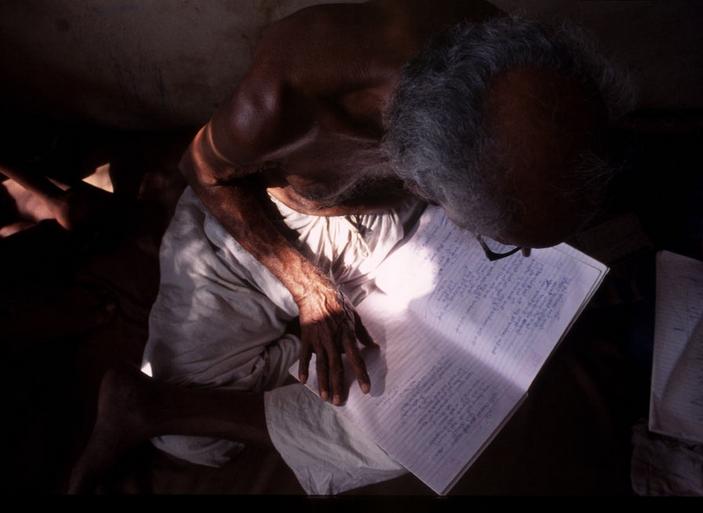 We are in collaboration with the artists. Where work is subtitled we begin to demand the presence of a voice and find ourselves clutching at headsets for dear life. We begin to translate our familiar into the other. We now speak other. As long as the there are voices there is hope, there is life.

In amongst the political discussions, and scenes of the birthplace of Indian textile industry, the power of words, the strength of the story thrums and beats its presence. Narayan Surve’s story becomes the act telling a myth. It is a confluence of words and a life embedded in a rich history, yet strangely indifferent to any historical context, not concerned with reaction against a certain zeitgeist.
Somehow the autonomy of the poet as a person, as a being free from genre and boundaries of race and class makes itself known.

‘Through your records I will not die, for I have been recorded’

We are invited to record our ‘reading’ of Mithu Sen’s I Am A Poet. We gaze at the fragile pages.

A finger’s width away, we realise they are not blank. They are littered with arrangements of symbols, white filigrees of possible meaning which exert control over us, tickling wonder and intrigue.

Sen’s assertion that we are all poets rings in our ears, as mysterious as the symbols
before us. Did we read our words into the work, or did Sen read her words onto us? A strange feeling of potential gathers and we find ourselves before a microphone.

A voice comes forth. We have been recorded.

A spontaneous conversation with every other author/reader/initiator/participants in Sen’s work.

We collect our paper copy of the book of ‘nonsense’. Our voice remains behind.

In Bergvau’s ‘Crop’ we read the omitted ‘o’s’ of the phrase ‘Some bodies like languages simply disappear’ in the same way- no matter their original linguistic context on the opposite wall.

The full stops in the exhibition title have suddenly become instructive.

We pause. We look out through the seamless glass onto the busy banks of the Thames, we imagine what it might be like to be amongst them.

We have become ‘other.’ We realise that we have not witnessed a revolution; we have joined one.