Can an old fella still handle festivals? Fruitbats and foot care at Womadelaide

We join around 150 people watching the ‘music show’ live broadcast at the Novatech stage, it’s a good introduction to some of the bands and jovial host Andrew Ford has a nice chat to Inna Modja, Hot 8 Brass Band and Ainu Dub to a chorus of background noise provided by the hundreds of fruit bats that are hanging in the pine trees next to the stage.

Heavy, but since most lyrics are in a language other than English, it’s an insight into what some of their songs are stating. The Guardian has an article on the political emphasis of this years Womadelaide , but its nothing really new. Although Womadelaide is often regarded as a good time dance event, the political messages are generally radical ones and many world music artists rail against the injustices that are committed against their peoples. As we leave, educated on at least some of the messages contained within the lyrics, the Siamangs in the nearby zoo add their frenzied whoops to the fruit bats’ chorus. It’s nice to be so close to nature; one of the best thing about this setting, it’s a magic spot.

This early, there’s virtually no one in the park. We have time to kill so have coffee at the Holy Cow cafe which has floor rugs, cushions and atmosphere galore. 30-somethings are arriving, embracing their friends whilst their little kids in knitted hats play with a tiny football. We listen to Turkish accordion music followed by cockney accordion music, which is a weird mix.

First mistake of the weekend occurs: I want to see the Turkish psych-rockers Baba Zula, who have a workshop at the Morton Bay stage. This proves to be a gigantic disappointment. Usually workshops feature a good deal of music, but these guys haven’t worked that out and talk for 20 minutes flat, not terribly engagingly, during which we learn about a good deal of Turkish history and feuds between Muslims and Turks, and that Ziljdian cymbals are of Turkish origin (and evolved from shields).

Eventually we both leave due to boredom. The experience puts photographer Ian off the band, but I remain convinced that they have potential.

I want to hear some music and this is provided in spades by Lamine Sonko (pictured) over on stage three. 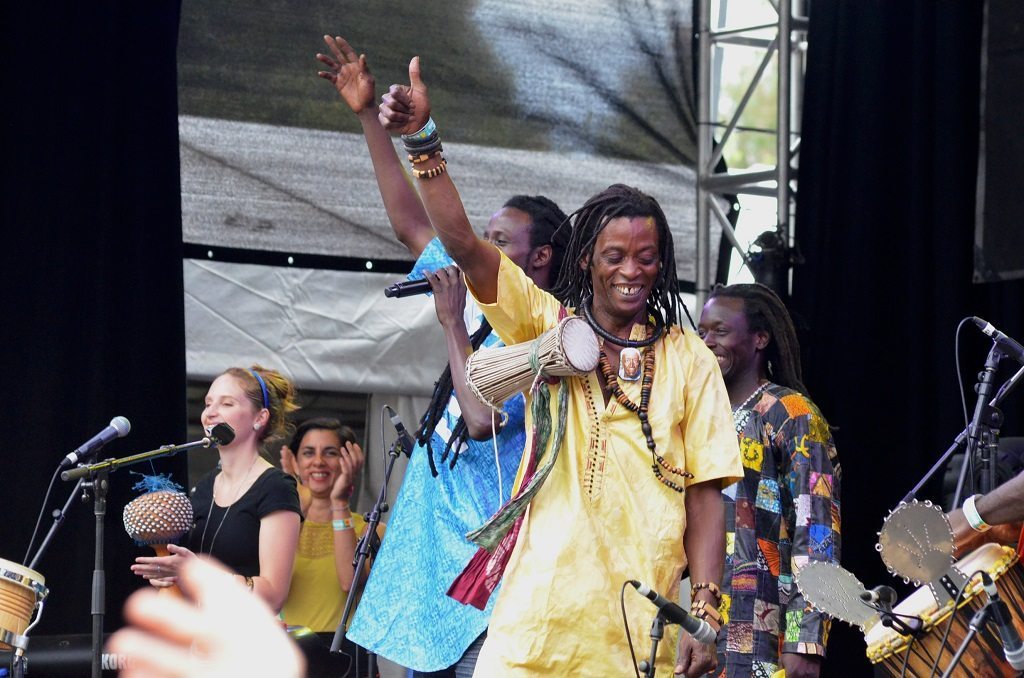 Tucked away under some pines, it’s one of the best stages, sound and location-wise. The dreadlocked Sonko is a high power leader who rips out African beats somewhat in the style of Baba Maal, adding oodles of crazy dancing by his sidemen and women, enthusing to the audience who respond in kind. There is the usual sea of hands and call/response stuff. This is a man to watch, as with his degree of charisma he could be a future African star.

The African Dance Machine continues on the foundation stage. Bamba Wassoulou Groove (BWG) are a Malian six-piece with a mildly charismatic singer. They feature limited percussion and two guitarists who collectively produce a modern African version of SF hippy band Quicksilver Messenger Service circa 1968. Ok, there’s no Bo Diddley beats, but the guitars interweave and sing around each other nicely whilst the frontman delivers convincing hip-hop style vocal chants punctuated by ululations, shouts and stutters.

All of which is infectious moving and eminently danceable. The audience loves it and the band leaves to a more than solid round of applause.

Local artist Mane and her band gave a good account of themselves on the Morton Bay Fig stage to an appreciative audience, but I was busy thinking about the main attraction of the day for me… Bokante.

This is a kick arse band full of superb musical talent, from the three percussionists (Jamey Haddad, André Ferrari and Keita Ogawa) to the four guitarists Roosevelt Collier – leader Michael League, Chris McQueen, Bob Lanzetti and the addition of bearded Aussie Paul Bender on bass. League is of course well known for his work with his jazz funk collective Snarky Puppy but as he says, in 14 years he has only ever formed two bands and the newest of these were playing only their second live gig on Saturday afternoon (an quirk they share with Crosby, Stills and Nash at Woodstock).

But you would never have known it. This is a polished, high energy band with a class lyric/vocalist in Malika Tirolien and members who clearly love playing together. Leader Michael League (who has the greatest range of facial expressions I have ever seen in a guitarist, only the late Keith Moon could better him) told us on Sunday during their third gig that ‘people ask me what this band is about and I tell them its a cross between 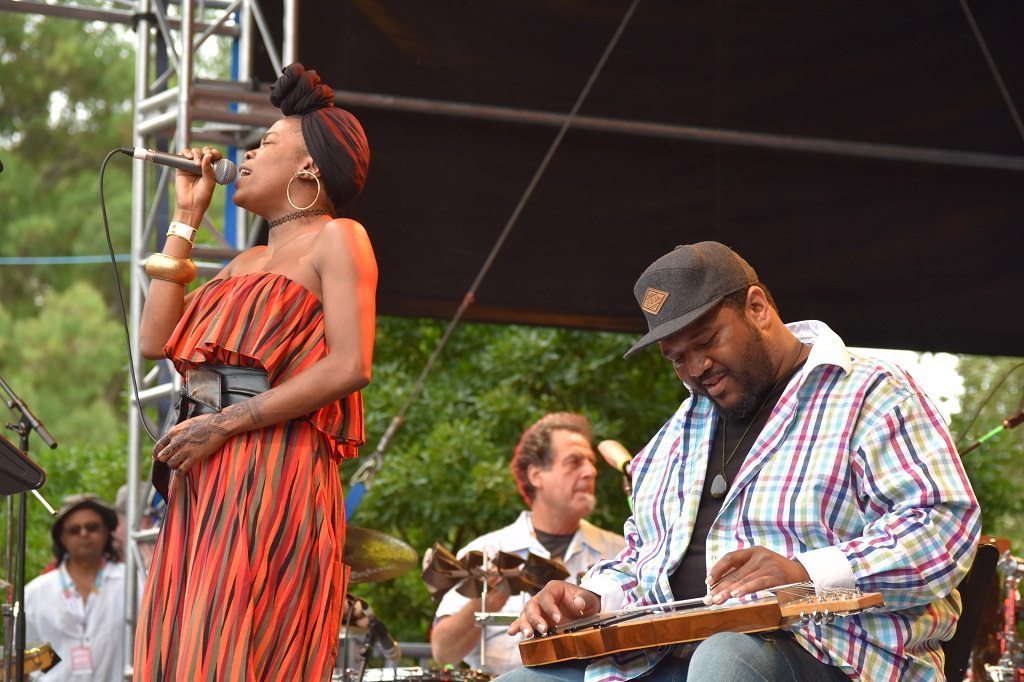 the blues,West African music and Led Zeppelin’. He also apologized for the current state of politics in the USA during each set, he’s clearly not a Trump supporter.

Each show had its own highlights. All three drummers synched beautifully as if they had been playing together for years not days, and most tracks were spiced up with dashes of fiery steel guitar from Roosevelt. This is snaky, grungy, syncopated roots music at its best and I believe this band has a great future. Certainly the best Western based band of the festival.

Canadian folk trio The East Pointers also qualify as one of the hits of the festival. These guys have played a lot of Aussie festivals and have perfected the art of getting the crowd onto their feet. About five minutes into the set and the whole audience is dancing.

The East Pointer combo of guitar, violin and banjo is designed to be infectious and looking around at all the happy faces confirmed that they have what it takes to make people feel good. A timely reminder that not all the action is confined to the bigger stages.

Highlights of the set were a very different version of David Bowies ‘Heroes’ featuring plaintive vocals and the evocative a cappella number ‘Blainey’s Laughing Eyes’ (two of the Pointers being ex lobster fishermen, this song is about a good friend lost overboard on a trawler) during there wasn’t a peep from the crowd. To have the whole audience in total silence at a big show like this shows a degree of major respect.

This was a looooong day. I foolishly wore shoes without gel inserts and my dogs were hurting. Dancing helped, standing was no fun, walking wasn’t too bad (although I started to get a nice little hip twinge).

More tomorrow. If I last that long.

Previous Story:
CAN: Unreleased Material. The Can Project: Barbican and Glastonbury Sets

Next Story:
The Secret of Staying Motivated (as Discovered by SCIENCE)