Like circuit bending, but with more control: Interview (Weightausend)

[dropcap style=”font-size:100px; color:#992211;”]I[/dropcap]t’s not only the sounds of classic 90s techno that have resurfaced in the work of contemporary producers lately.

The steroidal mode of heavy, dub-based sounds documented on the classic Macro Dub Infection compilation is also filtering through, as well as the darkest techstep atmospheres of that era. Fittingly, the (in)toxic(ating) atmospheres and horror allusions of the first three tracks are rounded off with a moody remix from Digital Hardcore veteran Christoph de Babalon. On Weightausend’s atmospheric new release Meet Your Doom! (Green Death) such influences crossbreed and proliferate. Codex Europa spoke to him to Weightausend (a.k.a. Matthias Girardi) to explore the thinking behind this dark sonic fiction.

What’s the primary influence on your work? Dub? Industrial? Electronica? 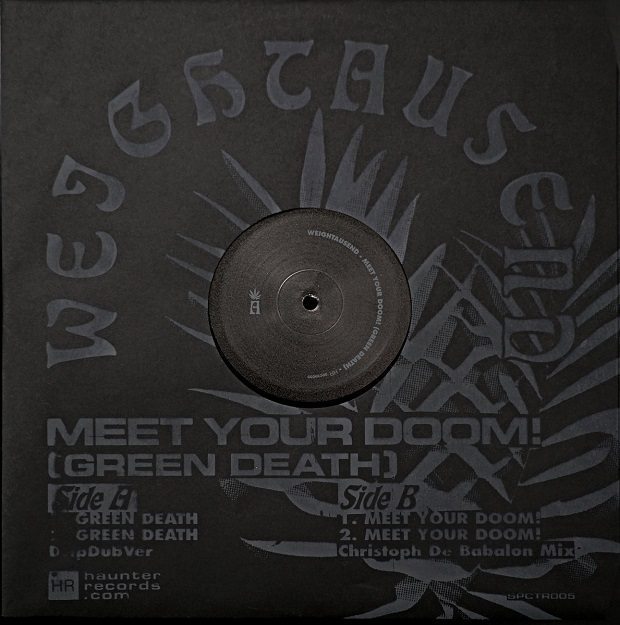 I used to watch lot of Scientist/Mad Professor studio sessions when I was younger, and have been really fascinated by the ‘rhythmic processing’ of the drum and vocal tracks. Industrial had been an influence especially for the sounds aesthetics, I always looked for something more acid and distorted.

Is there any influence from Techno Animal and the Macro Dub Infection scene of the mid 1990s?

More than Techno Animal there are Sidewinder influences in all of my works (especially with my other project, Cage Suburbia.) My early and latest stuff sound more raw and fucked up than the actual vinyl release. I’m into Industrial, early Electronica, Post Punk and the so-called IDM too (Autechre-Gescom, Rephlex releases).

The press release talks about ‘electronic pot smoke’: is this also some kind of narcotic soundtrack or is the soundtrack itself the narcotic?

I think they intended that the release would be more enjoyable if you’re high on weed, haha. It’s also a kind of narcotic soundtrack. I have been really high during the recording sessions. For me, pot is a sense amplifier, also a source of paranoia, autocriticism and sometimes, even a kind of self punishment.

How did the collaboration with Christoph De Babalon come about? Was he an influence on your style?

I love jungle music, and in the past I was obsessed with breakbeats and stuff. Francesco from Haunter told me about Christoph and his If You’re Into It, I’m Out Of It release [1997], and I totally fell in love with it. I had a talk with him at Macao, Milan. He’s one of the nicest guys I ever met.

Can you tell us something about your creative approach and production techniques – is your set up primarily analogue or digital?

Speaking about Dub music, my main objective in the last two year was to work with modular
softwares (Plogue Bidule, Max Msp) making rhythmic devices to generate dub/tribal-style MIDI sequences by themselves. I work a lot with MIDI and hardware samplers, old video game sound modules (as the Akai SG01 or Yamaha FB01) to process all the signals before “being read” by hardware.

I’m totally into obsolete digital sound modules, which respond in a very strange way to computer generated sequences and timed sysex/nrpn messages. It’s sorta like circuit bending, but with more control. I use my computer only to record and send the sequences, sometimes to process samples with dsp. So, my studio set up is mainly digital oriented.

Finally, apologies if this is a bizarre question, but does the title ‘The Green Death’ refer in some way to the 1973 Doctor Who serial of that title?

The Green Death concept came in a moment while I was smoking lots of pot and hash, and had this enormous panic attack, where I realized that I was probably meeting my doom. And my only solace would have been that if I died on a grass field, for example, my death would have been a source for the birth of new life. So, it’s like I hoped for an “ecological” death. It’s a bit weird, I know.

So, no, it does not refer to the Dr Who one, although I think it could be easily linked. The title “Meet Your Doom” is a tribute to Fletcher Hank’s comics, which I love. It’s so weird and sick.

Next Story:
Is it Done Yet? Archaeologists Find 5000 Year-Old Recipe for Beer