“I know this works. I know it works because I have seen it happen in real life,” Narayanan says. “I eat it every day. I make it a point of adding it to vegetables I cook. Every single day.” 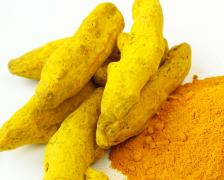 Oh yeah, anyone who loves a good curry knows this one is true. Turmeric stops a deadly virus in its tracks, and adds a lovely bass note to a dish at the same time.  Now all we need to know is how the hell to get the stain out of a white shirt.

Mosquito-borne Rift Valley Fever virus (RVF) is an acute, fever-causing virus that affects domestic animals such as cattle, sheep and goats, as well as humans. The research appears this month in the Journal of Biological Chemistry.

“Growing up in India, I was given turmeric all the time,” says Narayanan, who has spent the past 18 months working on the project. “Every time my son has a throat infection, I give (turmeric) to him.”

There’s more work to do before curcumin-based pharmaceuticals become commonplace, Narayanan emphasizes. She plans to test 10 different versions of curcumin to determine which one works the best. She also intends to apply the research to other viruses, including HIV.

Narayanan has long wanted to explore the infection-fighting properties of turmeric, in particular its key component, curcumin. “It is often not taken seriously because it’s a spice,” she says.

But science is transforming the spice from folk medicine to one that could help a patient’s body fight off a virus because it can prevent the virus from taking over healthy cells. These “broad-spectrum inhibitors” work by defeating a wide array of viruses.

“Curcumin is, by its very nature, broad spectrum,” Narayanan says. “However, in the published article, we provide evidence that curcumin may interfere with how the virus manipulates the human cell to stop the cell from responding to the infection.”

Kylene Kehn-Hall, a co-investigator on the study, adds, “We are very excited about this work, as curcumin not only dramatically inhibits RVFV replication in cell culture but also demonstrates efficacy against RVFV in a mouse model.”

Narayanan and her colleagues study the connection between a virus and how it impacts the host — human or animal. Symptoms clue in the researcher about the body’s inner workings. Rift Valley Fever and Venezuelan Equine Encephalitis kick off with flu-like symptoms.

Symptoms can make it challenging for someone to recover. The body usually starts with an exaggerated inflammatory response because it doesn’t know where to start to rid itself of the virus, she says.

“Many times, the body goes above and beyond what is necessary,” Narayanan says. “And that’s not good because it’s going to influence a bunch of cells around the infection, which haven’t seen the bug. That’s one way by which disease spreads through your body. And so it is very important to control the host because a lot of times the way the host responds contributes to the disease.”

Controlling the symptoms means more than simply making the patients feels better. “You’re giving the antiviral a chance to work. Now an antiviral can go in and stop the bug. You’re no longer trying to keep the host alive and battling the bug at the same time.”

Once Narayanan knows how the body responds to a virus, it’s time to go after the bug itself. She’s applying this know-how to a family of viruses called Bunyaviruses, which feature Rift Valley fever, and such alphaviruses as Venezuelan equine encephalitis and retroviruses, which notably include HIV.

She delves into uncovering why and how each virus affects the patient. “Why are some cell types are more susceptible to one type of infection than another?” HIV goes after the immune system. Bunyaviruses will infect a wide range of cells but do maximum damage to the liver. “What is it about the liver that makes it a sitting duck compared to something like the brain?” Narayanan asks.

Ultimately, curcumin could be part of drug therapies that help defeat these viruses, Narayanan says. “I know this works. I know it works because I have seen it happen in real life,” Narayanan says. “I eat it every day. I make it a point of adding it to vegetables I cook. Every single day.”
Source: George Mason University