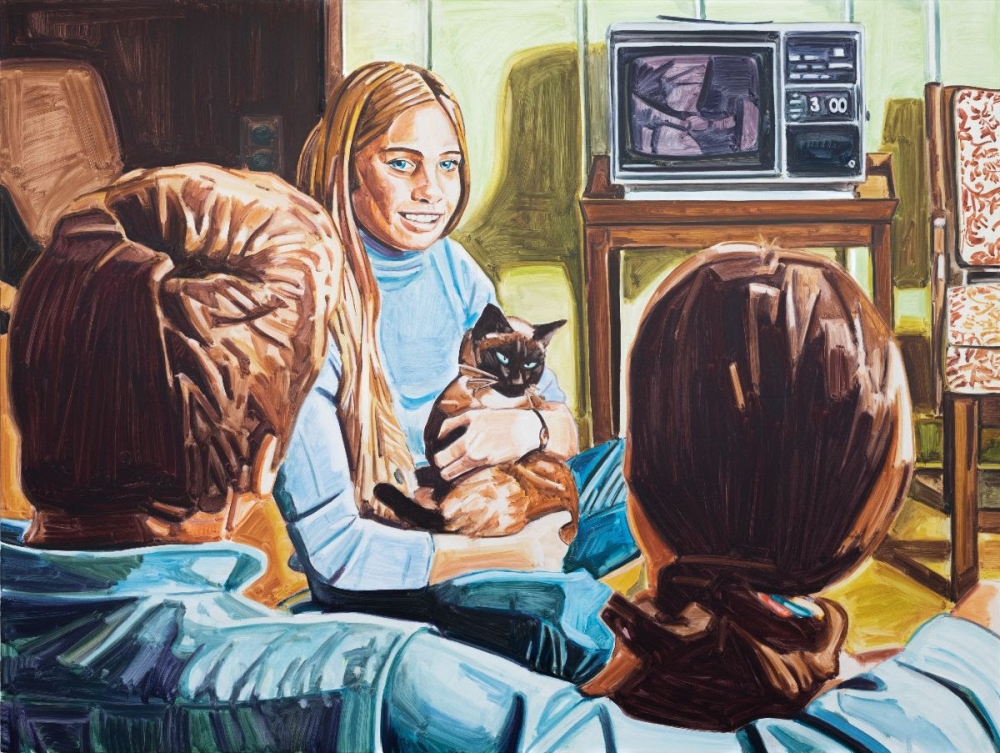 Lulu Bennett’s paintings depict idyllic scenes, family focussed romances that suggest the sort of heteronormative myth-making ubiquitous for much of the last century and arguably much of this one.

It is not unimportant to the paintings that Lulu Bennett is a trans woman. These might be memories from Bennett’s childhood rephrased through a personal and social focus. The female protagonist’s here are resplendent, captured private and often solitary but in acts that have a social (media) cache as performance. Notably, the artist places the viewer’s perspective in a conspiratorial position, we’re looking into the scene, and title’s like ‘They Don’t Know Anything About Me’ allude to mysteries within these suburban lives. And yet it’s unclear what our distance really says, are the subjects’ performative masks meant for us, or are we being allowed to see past them? In Anunciation, suggesting an important announcement (see below for the biblical reference), we don’t see the reactions, but from the girl’s demeanour it’s going well, even if the body language is a little guarded. Do we see clues to a connectedness in the similar coloured clothing of the figures? She’s turned towards her mother in the same coloured top as the father but breaking the fourth wall is she looking at us? What does the artist want us to see?

Other paintings show joyous figures gambolling in water, solo and full of life, but not necessarily independent. Looking back at us they are not in their moment entirely, they want us to witness their experience, to recognise a human vulnerability, which might be the human vulnerability. Like it or not we are social animals and Bennett’s latest works, with their dynamic scintillations depict people negotiating bright experience through a Kodachrome social lens.

Bennett’s works are beautiful reminders of the play between subjective joy and the transactions of experience between present participants. Looking at the sun-kissed tumults of aquamarine, the 70s filter of #bestlives, and compositional frames that suggest intimate photos it’s hard not to feel drawn to these rich carefree lives. What engages most though is not the cultural, gendered, or sexual tropes depicted (though they are fun) but the frisson of the works themselves. The splashes of water, energetic strokes of colour, and the way lines break up into strange abstract geometries on closer inspection. Get closer and you lose the photogenic effect. Through, quick brush strokes, exposed canvas, and shallow lakes of colour something harder and less distinct emerges. The image retreats and the painted act of becoming becomes the story.

Two women in white bikinis emerge from the shimmering spray of waves. With their perfect, pearly-white smiles and smooth, sun-kissed skin, it could almost be an advert for a swimsuit campaign and yet the image is split apart by a wide strip of rippling purple, yellow and blue. This vivid channel of swirling paint is evocative of both the sea at night and of a liminal space or passageway, leading beyond the surface into a deeper, mystical realm. Alive in Actual Time, Lulu Bennett’s fourth solo exhibition with Kristin Hjellegjerde gallery heralds an exciting new direction in the artist’s practice. In comparison to Bennett’s previous works which explored histories of power through bold, spliced imagery rendered in searing acid tones, these latest paintings are looser and more gestural in style. Here, references to the past – through interior settings and clothing – are not so much critical as playful, offering the artist a way of exploring her present experience through various female subjectivities.

The exhibition borrows its title from a quote from Geoff Brown’s 1966 novel I Want What I Want, which tells the story of a trans woman in early 60s England as she attempts to survive transition without the support of family or friends. ‘The author was a reclusive Yorkshireman who only wrote one other novel, and never gave any interviews. How he could so accurately and viscerally capture the trans experience remains a mystery,’ Bennett explains. ‘But the novel resonates with a lot of the themes I’m exploring in this exhibition: the provincial English experience, trans femininity, isolation and joy.’ Bennett came out publicly as a trans woman earlier this year and notes that her own experiences have necessitated a different approach to painting that has involved ‘a process of purifying and stripping away the content and noise to find a more direct form of expression.’

Many of the works were made in a single sitting, with one layer of paint thinly applied to the canvas and reworked while wet. As such, the surfaces appear fluid and translucent, while the boundaries between figure and background are softer, less defined. The effect this creates varies across the works. In Float, for example, the flowing brushstrokes evoke not only the distortion of a body and surface when viewed underwater, but also a feeling of weightlessness and harmony. Meanwhile, They Don’t Know Anything About Me depicts a blonde-haired, blue-eyed woman emerging from an abstracted background of watery colours. Though her features are clearly defined by light and shadows, she remains a spectral figure, luminous and wavering, not-quite there. The latter was the first work Bennett made after a period of searching, and it serves as a kind of threshold, a new beginning.

Other works in the exhibition evoke scenes from childhood. In My London Girlhood two girls in matching checked dresses stand at the edge of a lake, looking down at the rippling surface perhaps watching where a pebble was dropped or searching for fish. It’s an idyllic, summer’s day – the lake is smooth and glassy with a golden monument spouting water in the distance and sunshine bright on the girls’ backs and yet, there’s something distant or perhaps even eerie about the scene. We are prevented from seeing the girls’ faces and while the image initially appears vivid to the point of almost being photorealistic, closer inspection reveals rough brushstrokes that become more abstracted towards the back of the painting where the trees become fluid, dark green shadows. In this way, Bennett creates a slippage between memory and dream that plays with the idea of rewriting past narratives while also acknowledging the impossibility of altering actual events. The painting Gossip Girls sets up a similar tension. Here, we are presented with a snapshot of two girls chatting on a bus. One is swivelled round in her seat so that we can see her full face, illuminated by a cinematic golden light but we are once again held at a distance – we glimpse the scene through pane of glass while the interior of the bus itself appears almost wavering, comprised of broad, blue brushstrokes.

While most of the works appear to embody the lightness of the artist’s touch, creating a powerful and authentic sense of harmony between the image and its making, Anunciation is more claustrophobic in both style and subject-matter. The painting depicts a young girl sitting in front of her parents in a living room. Like the other paintings in the exhibition, the scene is filled with bright light but the dynamic between the figures is unsettling. This is partly due to the perspective: the viewer is placed behind the parents so that the backs of their heads fill much of the space and we are looking over their shoulders. An old fashioned television set forms another focal point in the background while the girl is smiling across at her mother and clutching a cat to her chest. Here, as elsewhere in the exhibition, Bennett explores the relationship between being looked at as an object and being seen as a subject. The girl may be under the scrutiny of multiple eyes but she is also the only active figure in the painting. In this sense, the work’s title takes on a double meaning referring both to the biblical story in which Mary is told she will become the mother of God and to the idea of finding a voice or taking control of one’s own narrative. While Mary’s story was laid out for her, the anonymity of the adult figures firmly positions the girl as the protagonist.

‘There is a conflict between the experience of coming out being incredibly freeing but also fraught within the context of a contemporary culture that is uniquely and violently hostile towards trans people,’ Bennett says. ‘Making lots of these paintings, I felt as if I were gliding on ice.’ While the ethereal figures and watery brushstrokes may hint at this feeling risk or vulnerability, it is presented as essential to the process of transformation. These are works that celebrate play and the imagination, but also the physical act of painting as a way of cultivating a deeper connection to self. 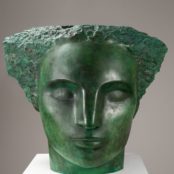 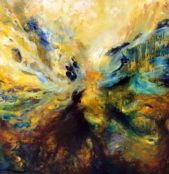