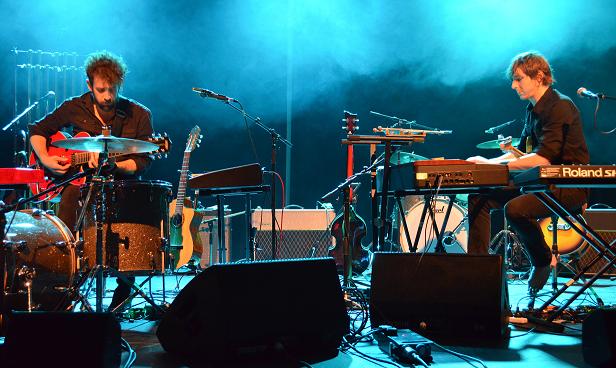 The basic premise of this show is that two guys perform Mike Oldfield’s Tubular Bells, however, the execution of this simple idea is so spellbinding that it converts the hardest cynic into something of a fan.  The most startling feat of this concert was to breathe new life into an album now 40 years old.

With the advent of sampling devices that can operate on your phone, the level of innovation encapsulated in Tubular Bells won’t be immediately appreciable to many under 50. However, without (much) hyperbole, the album was radical enough for legendary DJ John Peel to announce:

“It’s called Tubular Bells. I’ve never heard anything like it in my life”

and sold 8-15 million copies worldwide (depending on your source) setting up both Richard Branson’s nascent company, Virgin, as well as creating a music vocabulary amongst popular listeners that would allow the careers of many of the electronic artists now considered innovators in their own right.

Skipping forward to 2011 and Oldfield isn’t really heard of much outside of Prog circles and as a name dropped amongst other famous tax exiles. Not that it seems he particularly minds; his records still sell and his staunch cadre of fans can be relied upon to fill out his irregular forays into the public sphere. Then came the Olympics and a solid mention in the ceremony, and now Tubular Bells for Two….

Listening to the original 1973 recording again (it’s been re-released and re-recorded a number of times) it’s still a very unusual record which moves between moments of sophistication, to some pretty primitive rock, and back.  As anachronistic as it is avant garde, if the composition hasn’t aged into unalloyed greatness (see Dark Side of Moon) then we can point the finger at both its huge success and its subsequent legions of imitators.

What hasn’t dimmed is the vibrancy of the work. Tubular Bells screams out from the speakers with a coltish energy that leaps and bounds over genre and antecedent. Yes it stumbles in places where a less spirited nag would have plodded on in boring regularity, but that’s its charm and power. Tubular Bells remains an epic work of youthful idealism and vision and it is this that Blue Mountain natives Daniel Holdsworth and Aidan Roberts have brought to audiences in 2013.

Flanked by a large array of instruments these two twenty-something schoolmates attempt to play all the instruments on the record, ironically realising early listeners’ misunderstandings of how one unaided person might be able to record an album in one take.

‘The title of this new show caught my eye though – ‘Tubular Bells for Two’.

The record is a fantastically complicated sequence of recordings, so it will be interesting to hear it performed with just four hands and feet, rather than multi-tracked the way Oldfield managed it.

Mike played over 20 instruments and made more than 2,300 recordings until he was happy! ‘

Watching the performers bound around the stage barefoot to record an instrument, loop a take, then jumping somewhere to chop a riff, lay down a bass line or to bang the eponymous and epic tubular bells is both riveting and exhausting. The physicality of the performance and passion with which they try to make each singular take the best and most epic ever drives them onto greater and greater heights as the show progresses.

What’s more the occasional miss or fluffed note reinforces that there is no safety net… they have to get it right – tonight of all nights.

Tubular Bells was released on the 25th of May 1973 and 40 years to the day Tubular Bells was performed beyond expectation. There were already standing ovations at the first interval (the end of ‘side one’) and by the end of the second set/side floorboard-stomping was added to deafening applause. If they’d stopped at simply recreating the album the audience would have been impressed, but going a few steps further, both Aidan and Dan performed a solo acoustic song each, with each supporting the other from the side of the stage, before embarking on an proggy  ‘experiment’ that included the gamut of instruments on stage.

While both exceptionally accomplished as technical musicians, the depth of soul in their original compositions was equally daunting. Aidan and Dan play Tubular Bells as though every note means something personal to them… they play as fans to whom the album is a sacrament – a resonant feeling that the audience of Oldfield devotees appreciated and reciprocated.

A highly recommended show by two artists revelling in a great conceptual performance… but more than ready to meet Oldfield on their own terms.

Tubular Bells for Two – was performed at the Union Chapel in Islington on May 25th 2013
On tour throughout UK and Europe until July: Check site for full listings