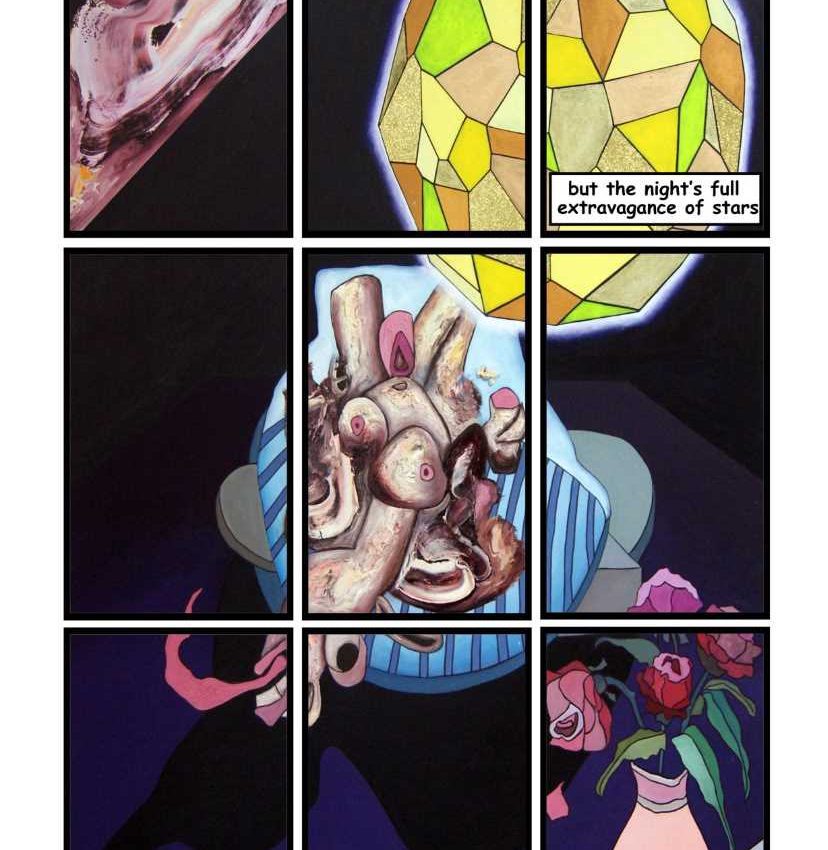 The Charnel House is a book by artist Tom de Freston, born out of a series of paintings he has created over the past few years which almost exclusively feature a horse-headed human hybrid character.

As he states at the beginning of the book, it had been his desire to give the character a whole world and narrative. The book, which de Freston has created as a poetic graphic novel, follows this horse-headed protagonist through an existence[quote]One of the major successes of

de Freston’s imagery lies in the

of the horrible and the harrowing

with the everyday[/quote] depicted in dramatic scenes of mutation, sex, sadness, love, death and torture, all in a domestic setting; framed through windows, reflected in mirrors, lit by light bulbs.

Through imagery set out on the page in classic graphic novel style and poetry inspired by the original paintings, the work explores a vast array of themes such as identity and memory, love and loss, the universal and the domestic, reality and the nature of perception, cruelty and suffering, and the relationship between the past, present and future.

The title of the book and horse headed-central character immediately bring to mind Picasso’s two epic works, ‘The Charnel House’ and ‘Guernica’, painted in the lead up to and aftermath of WWII. As with those works, a major theme of this book is suffering; the horror of man’s inhumanity to man, to animal, to oneself.

However, like all good art, The Charnel House is gloriously opaque. It steers clear of perception and instruction, preferring instead to encourage the reader’s own private and personal engagement with subject and subject matter. This is aided by the employment of ekphrasis, defined traditionally as a literary description of or commentary on a visual work of art.

The poetry here though is intended to work in synergy with the illustration, rather than simply describe. Contributions by 37 poets inspired by the original paintings are set on the adjacent pages to the illustrations, and serve to spin the reader’s imagination off on a new journey, often taking you to a very different place to the immediate impact of the images. This is a real strength of the book, as it ensures we are shepherded from shallow or lazy judgments of the images. 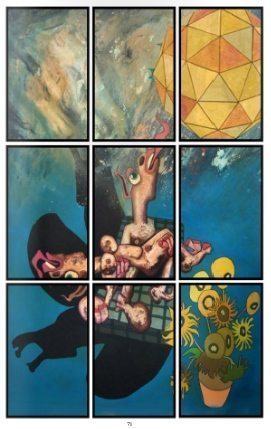 de Freston’s Bacon-esque pictures – comprised of whole reproductions and smaller sections of the original paintings – are dramatically composed and come across like mini-plays, conveying scenes of existential angst and physical torment (crucifixion, waterboarding, beheading), made all the more powerful by their protagonist, a man, being metamorphosed into a horse headed human. This lends the character an unsettling anonymity – all of a sudden it could be anyone. By the end of the book the character has gone through so many bizarre transformations – he splits and multiplies, reforms, rises and recurs – it stops being important who or how many – the character represents humanity itself.

The graphic novel format and ekphrasis begins to create something which constitutes, or at least resembles, a narrative. Mythology and artworks from various points in history are frequently referenced, as is religious iconography and also footage and photography of modern-day political atrocities. This affords the setting of the novel a ‘nowhere-yet-everywhere-in-time’ quality which, when combined with the harsh, angular compositions with which De Freston domestically stages each scene, means the book manages to combine a sense of claustrophobia with an atmosphere of dream-like universality.

This sense of pain as a timeless affliction is echoed heartbreakingly in a poem by Jo Hemmant, which alternates lines detailing the circumstances of Abbas Khan’s torture and eventual death in a Syrian prison (through the words of his mother) with lines forming an imagined tale of Abbas as a boy, falling off a wall he had climbed to the horror of his on looking mother.

Something which hit me about this novel is how complicit and involved I was made to feel in the suffering depicted. Indeed, some illustrations (including the first and last of the book) frame the viewer as the protagonist. Much of the rest of the imagery is either set through a window frame, or staged so that the perspective places us as a voyeuristic onlooker. We are made to feel immersed in the horror.

One of the major successes of de Freston’s imagery lies in the fantastically delicate positioning of the horrible and the harrowing with the everyday and the comical. Dogs slaver over bones, cats lick at milk bowls and hands type at keyboards in the foregrounds of scenes of violence and torture. Characters sit on toilets surrounded by death. 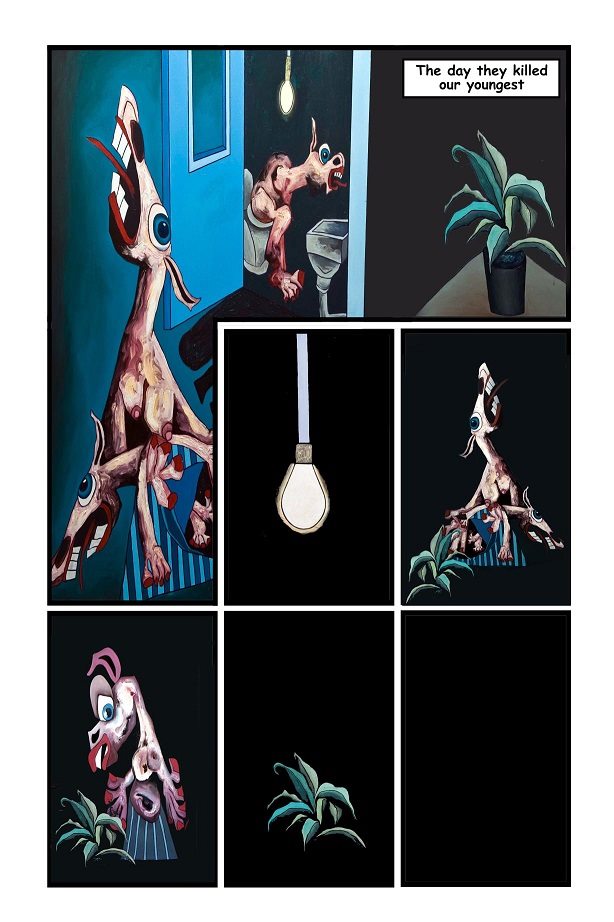 This juxtaposition is disarming. I found it had a curious effect; like taking a step back from a scene which doesn’t properly register only to realise that what you’ve been witnessing is truly crazy. I felt myself empathizing more deeply with the chaos. I also felt this peculiar effect during the final lines of Sarvat Hasin‘s poem, ‘Travel Guide To The End Of The World’:

Unzip your stomach
and let the railways of your gut spill the tiles.
They will eat your body like your bones are bread,
flesh slicked on like jam.
Remember that you left your keys
in a potted plant by the door.
Just in case.

There is a similar tension present in the paint application itself. Corners of rooms and spaces between limbs are filled with thick swirling brush strokes in the naturalistic colour of matter; flesh, earth and water. These areas threaten to, and often do, crash out into flatter areas of gaudy, unnatural colour. It hints at a battle between the urgency of reality and the cosy indifference of detachment.

I know what you are
thinking. I can see you there,
encased in the warm glow
of your indifference, safe
from the storm that rips
through the universal dark.

It is a grotesque idea (but one which could be argued) that as individuals, our emotional reaction to scenes of violence and torture – on TV, the internet, in the papers – is becoming more and more blunted by over-exposure. The Charnel House seems to want to shake us out of this de-sensitization by enticing us to engage more personally with the aesthetics of savagery and to think about what our response to such exposure can tell us about ourselves.

Visual repetitions, half clues and the decision to insert snippets of poetry (occasionally tweaked) into the imagery all contribute to a swelling sense of narrative to a point where it becomes an almost agonizing experience trying to understand the protagonist’s hostile world more fully. At times I found myself fighting to piece it all together, but then I would read another poem and be relieved of such a futile task.

This is where the real power of the use of ekphrasis becomes apparent. The novel doesn’t seem interested in conclusions. We, like horsehead (or, indeed, as horsehead) seem constantly on the brink of revelation, of understanding who and where we are, but we never actually reach it. This is echoed visually; in one illustration horsehead is poised, about to dive off a diving board into… into what? I don’t know.

Experiencing this book is like looking into a nightmarish kaleidoscope. Imagery, concepts and references mutate, slide into and fold around one another. Gods are disguised as Ikea lightshades, which you could swear were, themselves, disco balls in some hazy past. Nothing is obvious or safe. Everything seems to have a link to everything else while simultaneously pointing the other way. If there is a definite narrative, it is not linear but cyclical. 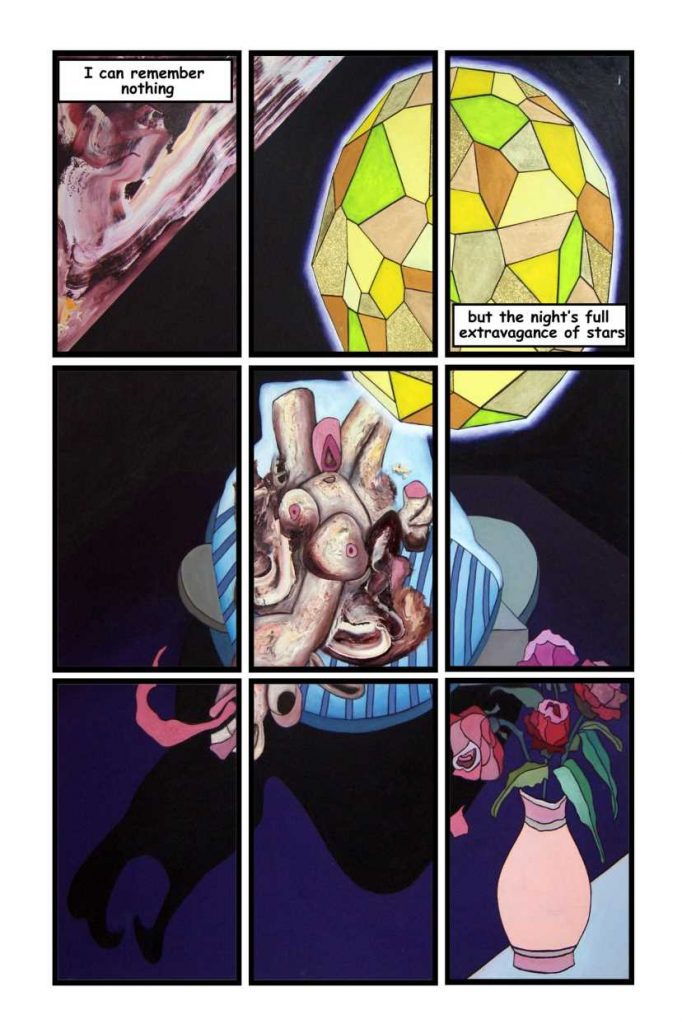 In the same spirit, the book also evokes a number of life’s cruel absurdities. One such example is the appearance of water – the ultimate life-giving element – as an agent of torture, as depicted in scenes of waterboarding and in ‘Swimmer of Lethe’, a poem by Tamar Yoseloff:

The deathy drink
sweetens my mouth,
floods my veins, my blood
cleansed clear,
I will go white like marble.

Characters double when they should die. The death depicted here isn’t cathartic, it is merely a shade with which to colour the walls of the protagonist’s prison existence. The character and the affliction lives on. The final line of the collections final poem, ‘Kindergarten’, by Fady Joudah, goes:

However dark that sentiment may appear, it does contain within it hope. Our hearts are still beating.

There is so much going on in The Charnel House that it can become overwhelming to try and take it all in in one go. A minor criticism is that some of the reproduced imagery perhaps doesn’t quite do the original works justice, especially where it has been stretched or squeezed to fit, but in the grand scheme of things this will barely matter. The Charnel House is a work of staggering depth and imagination and one to come back to again and again. 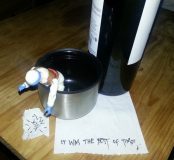 Next Story:
Carrot or Stick, Which Works?