By alcohol source, the lowest cancer incidence is in people who drank red wine 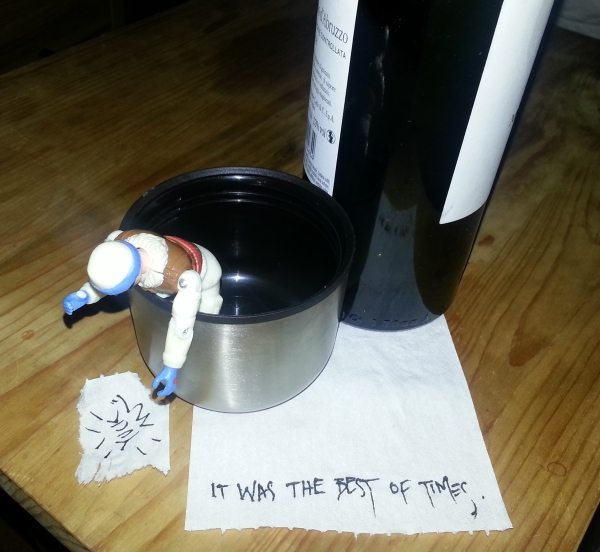 You know the one: chuckling whitecoat affects stentorian-but-approachable manner and points out that, no, this doesn’t mean we should start knocking back bottles of the lovely stuff, and that moderation should be employed.

But we’ve checked this newest report, and there’s NOTHING OF THE SORT!
*Uncorks jeroboam*

Alcohol use is a major risk factor for head and neck cancer. But an article published in the November issue of the journal Advances in Experimental Medicine and Biology shows that the chemical resveratrol found in grape skins and in red wine may prevent cancer as well.

“Alcohol bombards your genes. Your body has ways to repair this damage, but with enough alcohol eventually some damage isn’t fixed. That’s why excessive alcohol use is a factor in head and neck cancer. Now, resveratrol challenges these cells – the ones with unrepaired DNA damage are killed, so they can’t go on to cause cancer. Alcohol damages cells and resveratrol kills damaged cells,” says Robert Sclafani, PhD.

Some of what we know about the ability of alcohol to cause cancer comes from the study of another disease, namely Fanconi anemia, a rare genetic disorder that affects about 1 in every 350,000 babies. DNA naturally accumulates tangles called “cross links” and healthy genes can repair and disentangle cross-linked DNA. In Fanconi anemia, people are born without the ability to repair DNA cross links and so DNA damage accumulates. Accordingly, patients with Fanconi anemia are at greatly increased risk of developing cancers including leukemias and also head and neck cancer.

“We learn a lot from genetic disorders because you can put a finger on a gene and say, hey, we know what that does!” says Sclafani, who has presented at and regularly attends the annual meeting of the Fanconi Anemia Research Foundation.

In fact, it turns out that a genetic accelerator of cancer in Fanconi anemia is the same as the cancer-causing mechanism of alcohol. In both cases, the cause is partially metabolized alcohol. The body metabolizes alcohol by converting it first to acetyl aldehyde and then the body uses aldehyde dehydrogenase (ALDH) to further convert it to acetic acid, which is excreted. The partially processed state of alcohol, acetyl aldehyde, is a carcinogen and produces “cross links” in DNA.

Because Fanconi anemia patients cannot repair the DNA damage produced by acetyl aldehyde, they are at even higher risk for cancer if they also lack ALDH.

“With enough alcohol, the body can get behind and end up with a backlog of acetyl aldehyde,” Sclafani says. “Increased exposure to alcohol, loss of the ALDH gene that helps the body process alcohol, and loss of the ability to repair DNA cross links all result in increased cancer risk.”

With hard alcohol that’s the end of the story: increased risk for head and neck cancer due to increased production of acetyl aldehyde.

“But when you look at epidemiological studies of head and neck cancer, alcohol is a factor, but by alcohol source, the lowest cancer incidence is in people who drank red wine,” Sclafani says. “In red wine, there’s something that’s blocking the cancer-causing effect of alcohol.”

The recent article points to resveratrol as Sclafani’s “something”.

Sclafani describes the effects of resveratrol in terms of probability: “The more you drink, the more you accumulate DNA damage, and the more chance that one or more cells will accumulate the specific type of DNA damage that can cause cancer. Now, resveratrol takes out the cells with the most damage – the cells that have the highest probability of being able to cause cancer.”

According to Sclafani, the resveratrol in red wine (and other chemopreventive chemicals found in grape seed extract) isn’t a magic bullet that can completely undo the cancer-causing effects of alcohol, but by killing the most dangerous cells it may decrease the probability that alcohol use will cause cancer.