Tinariwen’s newest album Emmaar is a journey narrative, a walk with the Tuareg nomads through their desert home.

It starts off a bit unusually for an album from the empty sands of Francophone West Africa – with a short, deep, spoken-word piece in English, “Walking through it. Walking on water. Through a desert. Tassili, my beloved.” Intro a rich bass and the soft brush of the djembe.

The prose sets up the spirit journey with Tinariwen as our guide. The desert has always been a spiritual place to those who have spent significant time there. The Tuareg have a saying, “Aman Iman,” which translates to “Water is Life.” The album follows that journey from well to oasis in search of life among the sands.

Tinariwen has always remained more traditional than their counterparts like Terakaft or Bombino, and that’s little changed on this album. However, there are places on the record when the guitar opens up with the buzzing fuzz reminiscent of a scorched earth sun and you have to wonder if they aren’t feeling some of the influence from Bombino’s success with Black Keys’ rocker Dan Auerbach.

It’s only a passing similarity. There’s nothing extravagant or flashy about this band, and as their albums have progressed, they’ve maintained a guitar-based rock that puts them at the front of the world music scene. In Emmaar, Tinariwen is stripped down to the bare bones of rock and proto-blues, which is refreshing in many ways.

As the album moves into its mid-cuts, it becomes very contemplative. The simplicity is hypnotic and if you let it, it can take you places that other albums cannot.

This is why it seems like Tinariwen is taking the listener directly into their homeland. It’s the cool sands in the morning, heating up and then settling into the hard mid-afternoon march, the time of day when putting one foot in front of the other is all that keeps you going.

There’s nothing painful about this though. Like life, it just is, full stop, and you just keep going to make it through. The bass weaves back upon itself, the call and response echo: deep-voiced and strong, evokes an empty landscape, one that is both beautiful and dangerous. A hard mistress, perhaps one of the hardest in the world, but so lovely to look upon that you cannot quit her. 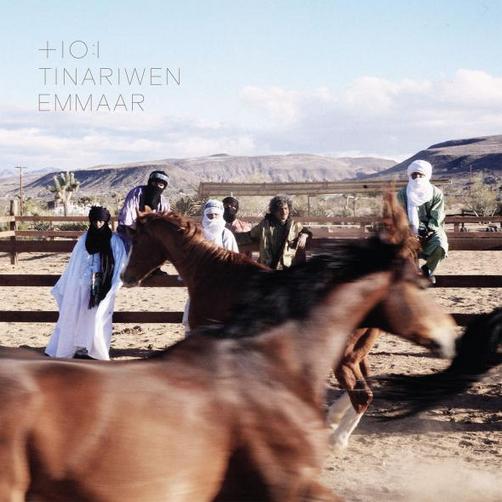 In the last third of the album, the oasis is near. There’s a spark of recognition and celebration that kicks the music into overdrive, the thrill of the journey’s end. The guitar comes back, but it’s lost its buzz and is high and clear like flowing water. The day is done, and it is time to rest.

Tinariwen’s been steadily putting out albums for over a decade now. If you haven’t heard of them before, this is the perfect intro to their wider work. They’re some of the best, and they’re only getting better with age. It’s one of those albums you can keep going back to, as their heavy foundation in traditional Tuareg music means there’s nothing flashy or temporal in their chords.

It’s a sound that lasts, and that, perhaps, is one of the greatest compliments for any album.