‘logic has completely failed us – the Kingdom is in tatters. What have you got to lose?’ SWP applies Voodoo thinking to the UK’s political woes 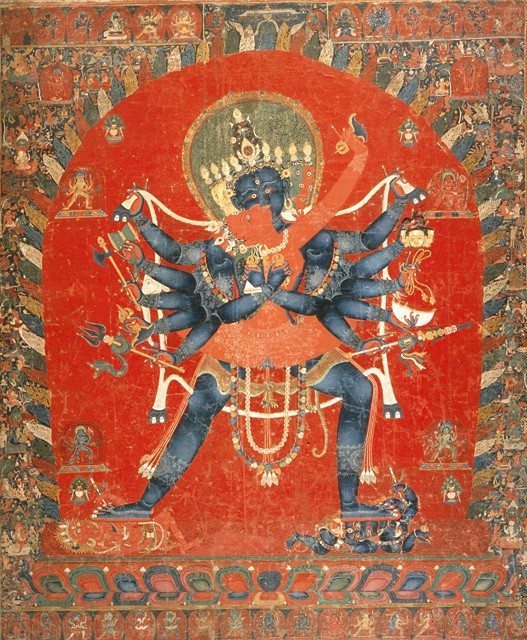 Further consideration, through the voodoo tarot, of the means required to get the country back on track.

The image: a young woman, hands tied behind her back, kneels in a clearing in the swamp. Six wild beasts stare at her from the surrounding jungle.

Contemplation: go deeply within, sifting through the shards of broken, ill-formed experience. Move past regret.

Regarding this card there is some reference to a righting or balancing of affairs: ‘when the ancestors lift themselves out of the swamps wearing the bodies of powerful beasts, transgression can find no place and the transgressor can find no peace.’

A secret society of aggressive tax avoidance has recently in the emerged in the UK as a result of the punitive nature of the income tax system and it has, allegedly, transgressed the law of the land. HMRC is now casting its icy fingers on the firms behind the recent Jimmy Carr and Gary Barlow revelations. This situation, which results in the wealthy paying little or no tax, is a result of the flawed notion that it is somehow ‘fair’ for the rich to pay a higher percentage of their income than those at the bottom end of the pay scale.

A much fairer system, which would vastly increase the revenue stream, would be a ten% flat tax: if you earn a 100k you pay 10k. If you earn 10k you pay 1k. This would also apply to corporate taxation, bringing an end to the need for the revenue service as well as accountants and financial advisors. It would also attract international companies seeking a low tax base and increase domestic employment.

The oracle suggests that if such a radical system were to be introduced we could move swiftly through the broken shards of our ill-formed experience with minimal regret.

8. The sudden increase in life expectancy

Card: Master of the Head

Image: a drummer summons a spirit from the skin of his drum. It kisses his forehead.

Contemplation: true service is always to the Self

The fact that people are living so long is, perhaps, the most worrying trend for society. Pension costs are escalating well beyond any future government or employer’s ability to pay them. In the UK the healthcare services are completely overwhelmed by the needs of the elderly. The oracle indicates that the choice of life or death must be for the individual alone. Western governments would be wise to prepare the proper safeguards and facilitate a policy of assisted death as soon as possible.

Image: a priestess holds a bowl on her head. An angel descends from on high.

Contemplation: Do what thou wilt, shall be the whole of the Law

The above quotation is generally misunderstood. Often interpreted as ‘do as you please’ it actually directs our attention to the needs of the higher self, which may contradict, or illuminate, those of the lower. I was aware from the start that it would be difficult to ‘marry’ earthbound concepts to the knowledge of the stars but I am struck by the oracle’s repeated advice to the individual rather than the herd.

One interpretation could be that we have been conditioned by the vested interests of drug companies to worry too much about our health. Why not eat more, drink more and be as merry as the devil allows? Our lives would certainly be shorter but, perhaps, more entertaining.

The image: Guedeh is a fine fellow in a top hat, sitting in a graveyard with his arms folded. One of his eyes is dark and the other is light.

Contemplation: to acknowledge and accept the sorrow of existence and know well its boundaries. Guedeh gazes within.

Foreign aid programs may well have a ‘feel good factor’, but do they actually do any good? Many less developed countries have unstable rulers who remain in power simply through their ability to determine the flow of aid money. India is one of the thrusting BRICK economies and a nuclear power with its own space programme, yet the UK continues to contribute to its economy.

The oracle suggests that we should examine the boundaries of our conscience and the limits of what we can actually achieve before offering handouts to the ‘undeveloped’ world. Our own world is now under-developing at a rapid pace. When these localised problems are solved we can then review such matters with a practical and generous eye. Until then real charity should begin at home.

Image: a powerful pregnant woman stands in the foaming sea.

Large commercial interests hide behind altruistic/eco-responsible/charitable/customer friendly/’we are really cool’/fair trading guises because they are frightened that we will take our business elsewhere if we see them clearly. They are no ‘honey dispensers’.

Their feeble gestures are constantly undermined by cynical actions: outsourcing call centres to foreign parts, using their purchasing power to abuse smaller suppliers by constantly demanding lower prices, automatic check outs (you do the work so we can make people redundant), cartel-style price fixing, tax shuffling to other territories, an unhealthy reliance on cheap labour and, in some cases, child exploitation.

To add insult to injury they waste our valuable time with telephone sales, overly complex contacts which mask their true intentions, and have used their power base to ‘steal’ the internet from the hands of the people.

The oracle highlights the real beneficial owner of our hearts, not the greedy little scumbags who drape themselves in her garments in order to cheat us.

The above oracles are, of course, coloured by my personal interpretation. Your own interpretations may differ wildly. Each individual must seek his/her own answers and possibilities. I simply suggest that you may, like me, find resonant answers in the welcoming arms of the Loa. After all, logic has completely failed us – the Kingdom is in tatters. What have you got to lose?

In the words of that great lyricist Johnny Mercer: ‘go do that voodoo that you do so well’