‘INTENT: to contact the Loa in order to gain advice/empowerment for dealing with the current, and worsening, crisis in the economy.’ SWP consults the tarot for political inspiration 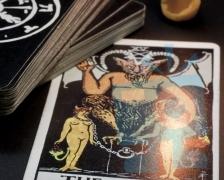 Part two: STARS OF THE NEAR FUTURE

INTENT: to contact the Loa in order to gain advice/empowerment for dealing with the current, and worsening, crisis in the economy.

METHODOLOGY: using my own mentality/life experience I have isolated eleven ‘hot points’ which I believe are being wilfully ignored by those in positions of power.

PRACTICE:  Utilising the always-rewarding The New Orleans Voodoo Tarot, available from Destiny Books, I prepared to open the spirit door with the ‘crossroads’ and ‘warming the deck’ techniques outlined in the handbook then shuffled the pack for randomly selected cards to augur each hot point.

The results are listed below:

The Image: a maiden dressed in white. She is carving a moon at the side of a pool surrounded by lush vegetation.

My attention is immediately drawn to the unique farm shop on Dalston Lane and a memory of pausing in the darkness to enjoy the green glow of its hydroponic tanks working throughout the night. Using state of the art fast-growth techniques, and small fish to clean the recycled water, this innovative eco-friendly business grows tasty vegetables twenty four hours a day, seven days a week. 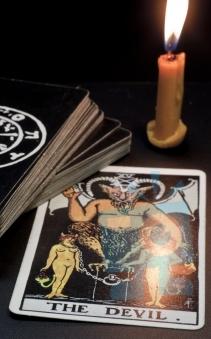 The oracle here suggests a positive use for all empty shops, unoccupied factory and light industrial space. Moon light is a reflection of the Sun’s light, indicating that solar energy storage should be given priority over costly and inefficient wind farms.

The Image: a hunter’s arrow flying from the earth to the stars.

Contemplation: that which is gathered spoils if not used correctly.

The hard-working hunter can spare only a small amount of his or her bounty for the benefit of others. Why should governments and councils spend taxpayers’ money on expensive advertising campaigns for hapless idiots? WARNING: don’t drink and fool around on hotel balconies! Doorstep salesmen will lie to you!

The oracle suggests that, instead of funding Art/Film/Culture, unquantifiable outreach projects, new committees/quangos/review boards, or wasting millions on doomed community projects such as the London Pleasure Gardens, the ‘authorities’ would serve us better by simply maintaining the basic facilities (roads, drains etc.) to a reasonable standard.

Contemplation: fire and water give rise to the vigorous dance of air.

This ship will only hold together under such extreme circumstance if it has been constructed using the best materials and labour. Unfortunately the European project has been glued together with vague promises and empty rhetoric by an unholy alliance of career politicians and big business. The oracle indicates sharply that the UK would be better off as an independent trading state, able to adjust its own tariffs and react swiftly to dynamic changes in international affairs.

The image: a spellworker decorated with green snakes traces patterns of white light in the air with his fingertips.

Contemplation: deep within the magic mirror (the mind) is a darting, quickening of light.

The oracle indicates that war is now fought in the air. Armies can not hold ground and land wars are no longer ‘good for the economy’. They are costly in both blood and money. The recent decline of America, for example, is partly due to their recent military adventures in which they have lost a fortune on hardware, software, manpower, bribes and munitions. In the skies their bombers and unmanned drones, often indiscriminate in the damage they cause, breed long lasting resentment amongst the indigenous populations they claim to protect.

The UK should know better than to seek alliance with a country that uses such weapons, and avoid all costly military adventures by becoming a neutral country (like Switzerland) as soon as possible. Without, of course, giving up the insurance policy of its nuclear defence capability.

The image: blue rain falls from a night sky onto a forest.

Contemplation: we are composed of flesh and death.

Gran Bois is the place below the subconscious layer of the mind to which all things return. It is an end of things. The oracle here is clearly more concerned with greater matters than varying interest rates. An optimistic reading would be that the banking/money lending systems will soon cease to exist.

6. Getting a better class of politician: card Marassa (the lovers)

The image: two identical twins, one male and one female, embrace.

Contemplation: the enjoyment of duality as an expression of existence.

Apparently the oracle sees a swift return to confrontational two party politics in the UK, although politicians should learn to love and respect each other despite their differing views. The Marassa are a separate class of being from the Loa entirely and ancient beyond reckoning. This may suggest that we should raise the age limit for entering Parliament and insist that all applicants must have spent at least ten years working outside the political system, so that we could dispense with the services of jumped up little martinets like Nick Clegg.

Next Story:
Drunken Tweets Not Confined to Humans