Interview with the conceptual artist, Cerith Wyn Evans who embraces the use of neon as a medium of immanent exchange. 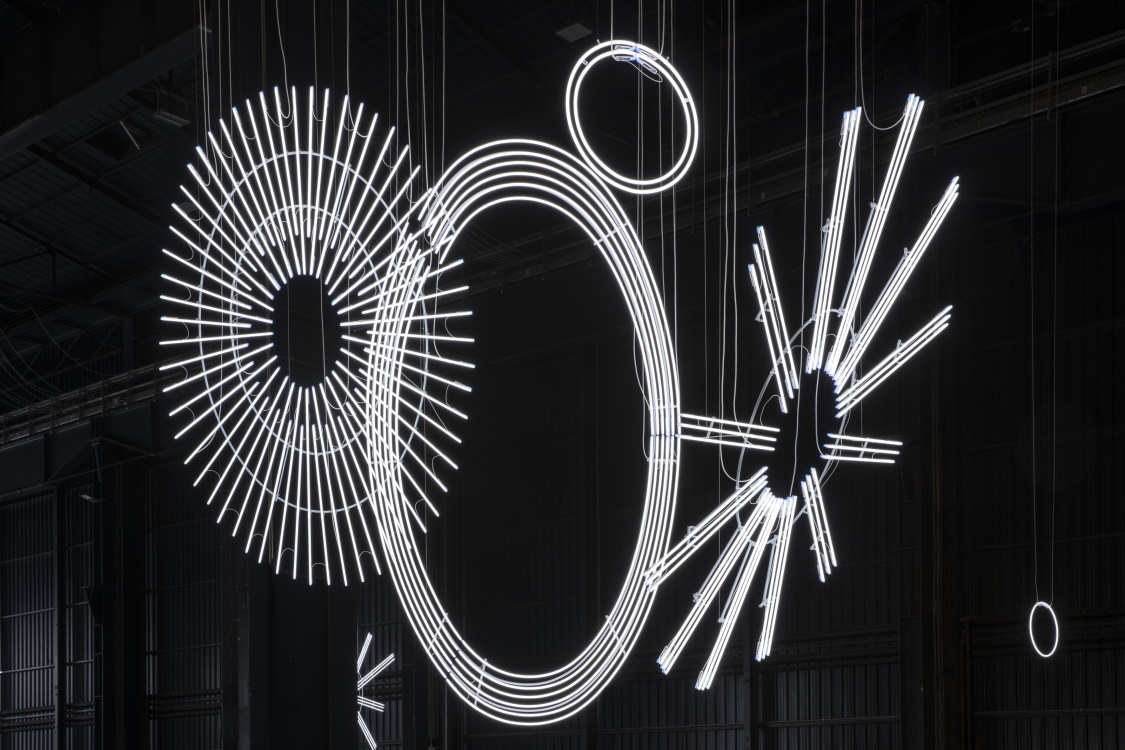 In 1898 William Ramsay and Morris W. Travers distilled pure neon from the atmosphere. But it was when they added electricity that it came to life with a radiant red glow. Ramsay’s perspicacious son drolly suggested the name ‘new’ for the discovery, and to this day neon, whether in signage or artworks, carries what artist Cerith Wyn Evans suggests is a “nostalgic sense of an obsolescent future”— a bright newness born from a fading age, a material where wish and memory meet to create a living dream.

Which, when presented to the mercantile world in 1910 at the Paris Motor Show, realised the potential of neon tubes to emblazon slogans throughout the night; where wishes become products, and dreams become consumable. Neon became the medium of a new commercial future.

Cerith Wyn Evans’ use of neon has been varied and searching. Nominally a conceptual artist, Wyn Evans has embraced the use of neon as a medium of immanent exchange, exemplified by his ability to detach the methodology of commercial neon; the wish and the dream from the product and the physical action. Speaking to Trebuchet we asked him “What suitability is there in neon?”

“It’s a strange request because it focuses on material use as a tool, something that is a signature because as an artist, as a producer, as a “brand” you become known for this. Which I’ve always had somewhat of animosity towards. The idea of looking at a medium as a tool that you have an attraction towards for the various material properties that it might have, for instance people work in glass because it’s something about the vicissitudes of the material not behaving properly. Yet, there’s something about neon that needs to be addressed, the history of my use of Neon is an exploration of medium and the appreciation of many artists who have worked with it in the past. ‘Neon’ is a generic term applied to a group of gasses which -put simply- emit light when charged with electricity… Neon glows red, Argon, blue etc.

One of my first Neon works was an ‘EXIT’ sign. This came about because I saw this sign while I was trapped in the cinema corridor. I noticed something odd about how one thinks of the exit sign, it’s barely a word, formally from the point of view of something that you recognise and so, and back to front it looks like ’t i x three’, and that’s how you could write it down if you wanted to write it back to front. My work has never been called ‘the exit sign’ it was always called ’t i x three’ but being overdetermined as a signifier it swims right through – so everyone more or less knows what it is. I suppose what Guattari might call schizoanalytic cartography and you know dismantling  ‘Reality’ is a dream come true.

Rosalind Krauss talks about the obsolescence of technologies that are thrown on the scrap heap of history. There’s something about the revival of these things that are falling off the edge of a system or falling into an archaic technique or being supplanted by something else that I might employ. How things are associated with a certain nostalgia; the effect of neons, the atmosphere it produces and so on. Neon is often associated with “Chinatown” and I am always a little bit disappointed that the future’s populist incarnation hasn’t moved on from Ridley Scott’s idea of the future. We’re immersed in this technological tyranny and enslaved to algorithms promoting the hysterical scenography of Late Capitalist Phantasy.

Yet, there is something attractive about the volatility of neon as a medium, there’s an alchemical property to it. There’s a very mysterious, intractable, strange force, at work, energies that are very palpable and physical.

There’s also electric shocks. There are transformers and what do transformers do? It all begs an overdetermined analysis of neon as a medium, in relation to the metaphorical states that it so readily gives itself over to, in relation to illumination or transformation of electrical current. The essence of the medium is a gas, these are noble gases that were ‘discovered’/extracted in the late 19th century, so all kinds of histories are intersecting here with the conditional ‘Laws of Nature’. Neon is steeped in all these factors and it performs by putting electricity through these gases which have been distilled from the air, glow. If you break the glass tube, the gas rejoins the atmosphere, you can’t make it and you can’t destroy it. It’s just apparently ‘there’. It’s an element.

Neon literally means ‘new’ so the topology of Neon is part of a whole history in the long story of its charm on people and its loose knit tendency to glow, and its slightly otherworldly way of being, by its very nature, transformative. It is a dialogue between a stethoscope and a crystal ball, if we were writing a poem, or James Merrill was writing it. So I think there are on other levels charms and the allures to neon that expands my consciousness as it illuminates my imagination.

I think by viewing everything through the lens of digital technology, computing, and artificial intelligence we’re seeing a paradigm shift in which raw materials are reconsidered by their ability to be transmuted and transmogrified into other forms. The life of forms is itself undergoing a paradigm shift so we’re in this mediamatic limbo between life and death and the folds of obsolescence.

We have an enormous beech tree in the garden of our house and I read the other day that the life of each tree is approximately 300 years, it takes 100 years to grow, 100 years to live and it takes 100 years to die. So there’s this cycle involved and so, in the way when you start thinking about all those cycles superimposed on top of each other it creates a friction, a circuit. Neon is a circuit. It’s just the temporary, incarnation of that light which has been trained into those forms that manifest. So if neon enters into the work, it enters into the room and it’s what it does to the room that’s important, or ‘matters’.

It’s a strange alluring constantly volatile material that carries something. An early neon work that really affected me was Giovanni Anselmo’s piece Neon nel cemento (Neon in Cement, 1967–69). It’s one of the first pieces that I saw that really blew me away and it’s probably my favourite. It’s the length of neon, completely encased in cement, you just see the electrodes emerging so you have to ‘believe’ really that the light is shining in the middle of the concrete. It’s completely occluded. For me that’s a radical, very beautiful and moving, use of the material. It spurred me to look at the other properties that neon has. There’s something devotional about the glow/flow, there is a magical way in which you are able to see it…“Being and Neonthingness” ”

(As told to Kailas Elmer over the ‘phone)

Next Story:
(Text)ural Works and Abstraction at Enter Art Fair