Moonrock, Starstuff and Syd: the Stunning Jewellery of Ian Barrett

You have to go a long way to get the best fossils and meteorites, or you can buy Ian Barrett’s Jurassic Jewellery

[dropcap style=”font-size:100px; color:#992211;”]M[/dropcap]anchester-based jewellery designer and owner of Jurassic Jewellery Ian Barrett  has a job every space-obsessed, Star Wars-mad child of the ‘70s dreamed of having.

In an effort to inspire American schoolchildren to study science soon after the first lunar landing (which the fading desultory NASA posters in classrooms had failed to do) moon rocks were sent on brief tours of public (state) schools. But they were encased in Plexiglas and, maddeningly, no one could touch them.

NASA has since been as stingy as record companies when it comes to claiming the rights of any artifacts, including moon dust, brought back from all NASA missions. But even NASA can’t stop bits of the moon from landing on Earth as meteorites, at which point they are fair game for private individuals to own. And to use as an artistic medium.

Since founding Jurassic Jewellery in 2006 Ian Barrett has used moon dust, Mars dust, amber, and moldavite, as well as authenticated meteorites (mainly found in North African deserts) and fossils from dealers all over the world in the space-inspired, psychedelic jewellery he makes by hand. 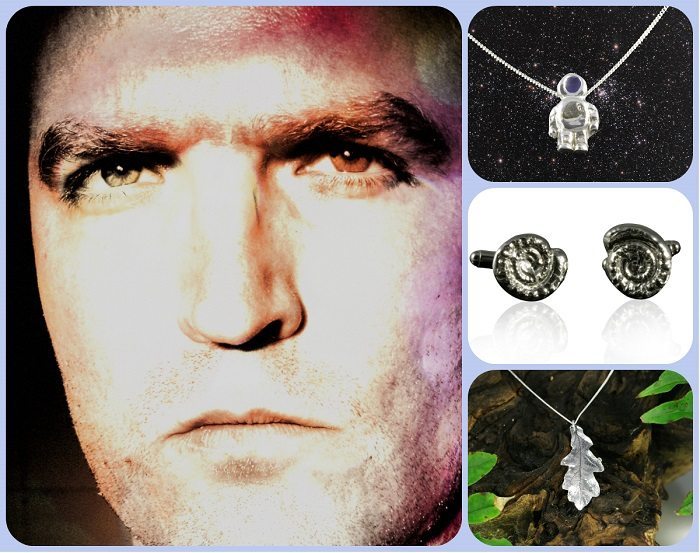 He also uses “fordite,” recycled accumulated layers of old car paint, which was quite plentiful in the era before proper ventilation in professional car paint shops, but is increasingly rare. Fordite has a swirly, colourful appearance much like Venetian Murano glass beads.

Barrett told The Planet of Sound:

“The most exciting meteorite material I use in my jewellery is the Moon and Mars meteorite. These were once sat on the surface of the Moon and Mars. With such weak gravity they are often hit by other rocks and this knocks them off the surface and into orbit. They can travel around for thousands of years until a few land on Earth. These all have to be tested and retested in specialist laboratories and if they pass this rigorous testing they are allocated an official meteorite number.”

It is entirely appropriate for the nephew of the first frontman for Pink Floyd, the band who jammed “Moonhead” live on BBC TV during the 1969 Apollo 11 moon landing (sans Syd), to use material from space to create beautiful wearable art. You can now literally wear a piece of the Moon, a former planet, or asteroid, something which is a far cooler gift than naming a star after someone.

These unusual designs are surprisingly affordable, thanks to Barrett’s preference for using silver rather than gold, and have attracted the attention of free spirits with musicians like Julian Lennon and neolithic-era expert Julian Cope among his customers.

Barrett recently answered a few questions about his business, designs, musical taste, and early life in an interview with Trebuchet.

Trebuchet: So many of your family members have been involved in science OR art, but your career path combines the two in an interesting way. Did your father’s work as a metallurgist influence your decision to take up jewellery design?

Ian Barrett: I have honestly never really thought of that. I certainly didn’t consciously follow in his footsteps, but maybe I did without noticing.

I started creating jewellery as I love the idea of creating something that becomes eternally valued and treasured by the recipient, and combining this with the amazing materials I use makes it even more exciting. 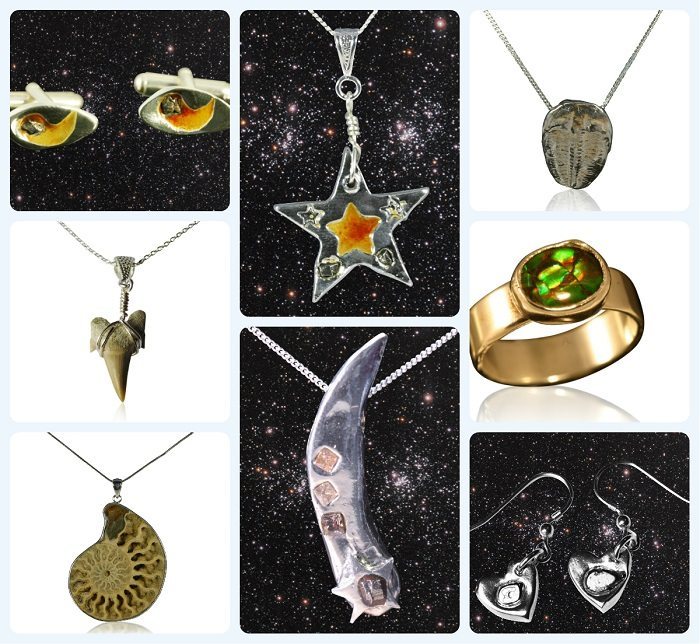 Some days when I am sitting playing around with stunning fossil ammonites or meteorites I just feel so lucky to get paid for it too!

Trebuchet: Were you inspired by any other jewellery designers, artists, or sculptors?

Ian Barrett: I try not to be led too much by other jewellery designers for fear that I might end up imitating their style. Designers like Theo Fennell fascinate me as I love the obsessive, detailed beauty they build into something as tiny as a ring.

His focus is on gold and diamonds, and mine is not at all, so we certainly don’t work in the same way, but I love his work ethic and inspiration.

I don’t have a formal jewellery training, and have taught myself the skills as I have progressed. At the moment I don’t have time to take any qualifications in jewellery and in some ways that helps my style as it means I work within my means and grow organically.

Trebuchet: How long have you collected fossils? Have you ever discovered one yourself?

Ian Barrett: I’ve been looking for fossils all my life. I think most kids who love fossils do the same, and scrape away at random rocks to see if the face of a dinosaur appears. It never does of course, but an ammonite is a good second best!

We often visit the Jurassic Coast when down that way, and it’s a great place to visit, but there is not a massive amount of material to collect in the UK. If I were to rely on just England for my fossils I would never be able to run a successful fossil jewellery business. 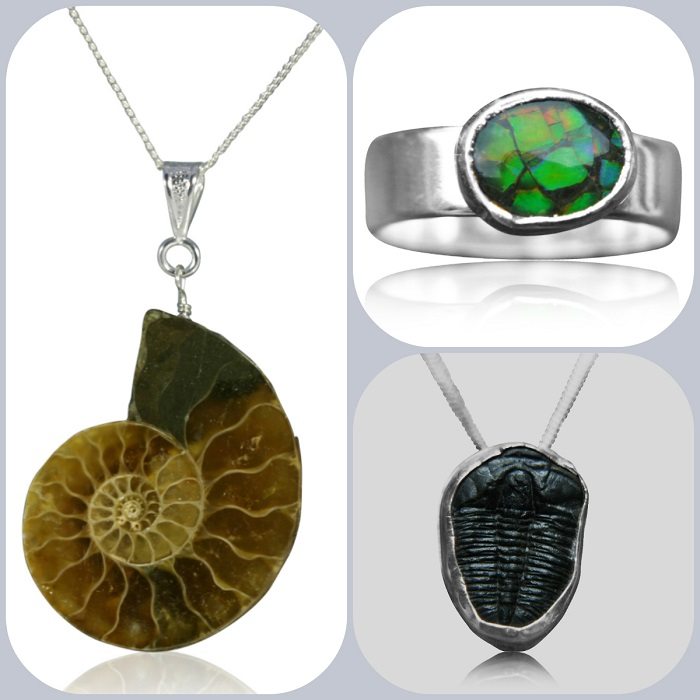 I have a network of suppliers built up over many years and they get me fossils from all over the world. You have to go a long way to get the best fossils, be they stunning ammonites from Madagascar, or fossil sharks teeth from Florida or Morocco.

Trebuchet: What are meteorites and fossils like to work with as materials? For example, in the case of meteorites, is it easy to shape them generally or does it depend on the metal content of the individual meteorite?

Ian Barrett: When it comes to making meteorite jewellery, there are certain ways I work depending on the type of meteorite. The two main types I use are stone meteorites, (originally a part of the Asteroid Belt –a band of rock spinning between Mars and Jupiter) and iron meteorites, which are the remains of the core of an exploded planet-sized object somewhere in space.

Trebuchet: What other careers or projects did you pursue between college and starting Jurassic Jewellery in 2006?

Ian Barrett: I had plenty of less than thrilling jobs. British Gas for some years. No offence to British Gas, but I have them to thank for inspiring me to go out on my own. I didn’t enjoy having a boss and it led me to become my own boss so I never have to be told what to do again!

I studied Drama at university and that brought me to Manchester, a city I love and still live in. I was always more into writing and creating dramas than acting, and writing is something I would love to return to at some point. They say there is a book in everyone and I’m sure I’ve got a few lurking….

Trebuchet: You said in another interview that your uncle Syd [Barrett]’s music career influenced your creative work. Did you see him much when you were growing up or as an adult?

Ian Barrett: I saw him lots when younger, as when I was a teenager he moved back to Cambridge and lived with my grandmother. We visited her loads and he was always in the house.

I wouldn’t say he was as outgoing as some uncles, but he was always there and always friendly to us.

Trebuchet: What memories of him do you have?

Ian Barrett: The important thing to note when answering this question is that Syd Barrett was known to us as Uncle Roger, as Roger was his real name.

The unique thing about his career is that when he quit show business at the start of the 1970’s he MEANT it. He never played a note or spoke a word to the press ever again. Pretty much all musicians who quit music due to problems end up returning in one form or another, but he never did.

It’s for this reason that my memories of him are not really any different to those anyone might have of an uncle.

When I was young I had no real idea of his previous life and neither did I really care. It was just nice to visit the house and play. We’d often meet up with cousins there and storm up and down the garden on bikes. This was no celebrity lifestyle. Cambridge folk don’t really do showbiz!

The main problem he had to deal with in his later life was the constant stream of visitors to his house. People would travel from all over just to sit outside his house working up the courage to knock on his door. This would annoy anyone, and you just wouldn’t want it.

Trebuchet: Well-known musicians are among your customers. Did you intend for them to be your target audience or were they simply drawn to your work?

Ian Barrett: I didn’t really go out with a specific plan to sell to them, it just happened organically. With Andy Bell from Ride/Oasis for example, I met him at a tribute concert for my Uncle and he saw me wearing one of my own meteorite necklaces and ended up buying some for himself and as presents.

Trebuchet: Do you listen to music while you are working?
Ian Barrett: Of course!

I have always got music on when working. Who wouldn’t, if they had the chance?

I’m an indie kid of the Nineties at heart and grew up soundtracked by Spacemen 3, Julian Cope, Primal Scream, all sorts! Radio 6 is also a staple. Stuart Maconie’s Freak Zone is a favourite.

Trebuchet: Do you think that there are any kinds of healing or metaphysical properties in meteorites, like some believe is the case with crystals and gemstones?

Ian Barrett: This is something I am asked quite often by customers. Sometimes I think I might make more money if I go along with their beliefs and agree with the idea that crystals having healing properties.

But I don’t. I approach these materials from a viewpoint that they are beautiful objects with a fascinating grounding in science. I am not really interested in the theories that they may be able to heal or protect the wearer.

It just doesn’t make sense to me and I certainly never lie and make any such claims. If a buyer wants to wear them and feels protected by them then so much the better, but I don’t really believe it myself.

Jurassic Jewellery will be available at Salford Museum and Art Gallery’s By Hand Gallery until April 2016. Barrett’s work can also be purchased online at his Etsy shop and the Jurassic Jewellery website. He also accepts bespoke commissions and can be contacted at shop@jurassicjewellery.co.uk.

Previous Story:
Not the Final Countdown for Europe – DVD and Tour (Europe)

Next Story:
Fields of the Nephilim Intimate Islington Date Announced!