Got Rhythm? You Probly Talk Gud Too

It may be that musical training, with an emphasis on rhythmic skills, exercises the auditory-system, leading to strong sound-to-meaning associations that are so essential in learning to read

[dropcap style=”font-size:100px; color:#992211;”]N[/dropcap]aturally rhythmic people have better linguistic skills. This is a discovery?

Get these people a copy of 8 Mile.

People who are better able to move to a beat show more consistent brain responses to speech than those with less rhythm, according to a study published in the September 18 issue of The Journal of Neuroscience. The findings suggest that musical training could possibly sharpen the brain’s response to language.

Scientists have long known that moving to a steady beat requires synchronization between the parts of the brain responsible for hearing and movement. In the current study, Professor Nina Kraus, PhD, and Adam Tierney, PhD, at Northwestern University examined the relationship between the ability to keep a beat and the brain’s response to sound. 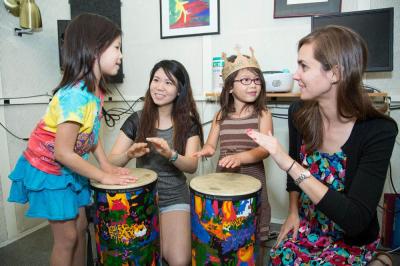 More than 100 teenagers from the Chicago area participated in the Kraus Lab study, where they were instructed to listen and tap their finger along to a metronome. The teens’ tapping accuracy was computed based on how closely their taps aligned in time with the “tic-toc” of the metronome. In a second test, the researchers used a technique called electroencephalography (EEG) to record brainwaves from a major brain hub for sound processing as the teens listened to the synthesized speech sound “da” repeated periodically over a 30-minute period. The researchers then calculated how similarly the nerve cells in this region responded each time the “da” sound was repeated.

“Rhythm is inherently a part of music and language,” Kraus said. “It may be that musical training, with an emphasis on rhythmic skills, exercises the auditory-system, leading to strong sound-to-meaning associations that are so essential in learning to read.”

John Iversen, PhD, who studies how the brain processes music at the University of California, San Diego, and was not involved with this study, noted that the findings raise the possibility that musical training may have important impacts on the brain.”This study adds another piece to the puzzle in the emerging story suggesting that musical rhythmic abilities are correlated with improved performance in non-music areas, particularly language,” he said.

Kraus’ group is now working on a multi-year study to evaluate the effects of musical training on beat synchronization, response consistency, and reading skills in a group of children engaging in musical training.