There are certain occupational hazards one associates with certain activities.

Teachers get throat nodules, investment bankers get ‘burn out’ (a euphemistic terms for the inevitable attack of the screaming ab-dabs on finally realising that trading in ‘commodities’ actually causes the misery and death of millions), and truck drivers get uneven tan-lines.

You’d have thought that as a gymnast, the biggest worry would be strained muscles, bad landings and, in the case of the female competitors, the looming approach of that career-ending 13th birthday. Alas, it tuns out that gymnasts get exposed to carcinogenic flame-retardant chemicals bursting out of their equipment every time they impact thereupon.  Nasty.

As the summer Olympics get underway, a new study co-authored by Boston University School of Public Health (BUSPH) researchers reports that popular gymnastics training equipment contains mixtures of flame-retardant chemicals that have been linked to increased risks of ADHD, cancer and brain development delays.

The study, published online in the journal Environment International, found higher levels of those chemicals in gymnasts’ urine, indicating that gymnastics training environments – specifically, pit cubes found in foam pits — are a source of exposure to toxic flame-retardants.

“Combined with our previous research, these findings indicate that gyms can contain high levels of mixtures of different flame-retardants, and that these chemicals are entering gymnasts’ bodies,” said lead author Courtney Carignan, who conducted the bulk of the research as a PhD candidate at BUSPH. “This is particularly concerning for competitive gymnasts and coaches who spend a lot of time in the gym.”

Chemical flame-retardants are well known for their use in the foam of upholstered furniture. They move from foam to dust to people, and enter the body when dust on the hands is accidentally ingested, inhaled, or absorbed through the skin. They are widely known to be toxic to human health, with previous scientific studies reporting on myriad harmful effects of exposure, especially to the fragile developing brains of babies. Further, research has found that the use of these flame-retardants in furniture provides no significant fire-safety benefit.

While prior studies have found high levels of such retardants in the air and dust of gyms, the new study, which analyzed foam pits in 11 U.S. gyms, found that 89 percent of pit cubes sampled contained flame-retardants. Foam pits routinely are used to safely teach new skills. 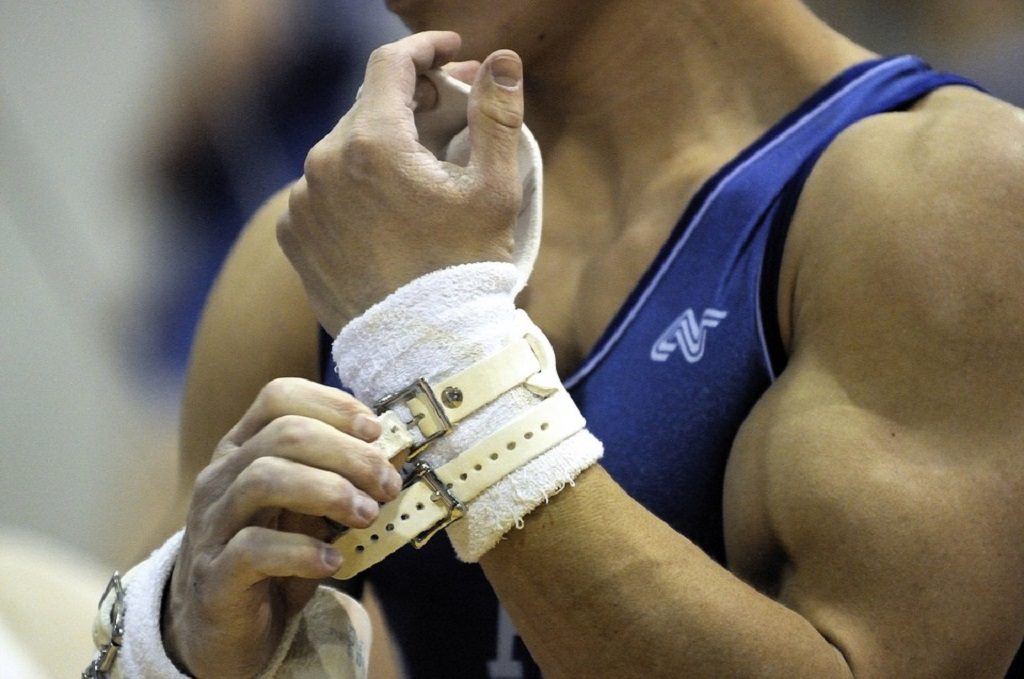 In addition, the study found that exposures among a team of 11 collegiate gymnasts were linked to the flame-retardants in their gymnastics-training environment, with higher levels of those chemicals in their urine after practice than before practice. The markers of the chemicals in urine samples were the same as the flame-retardants found in pit cubes in the gym’s loose-foam pit.

The most common flame retardant found was TPHP, a suspected developmental disrupter. There was a 50-percent increase in the average level of urinary metabolite of TPHP in the gymnasts’ urine collected after practice, compared to before practice.

In rodent studies, prenatal exposure to TPHP has been found to interfere with bone-cell development in offspring.

The second most common chemical found was PentaBDE, which was phased out in the U.S. beginning in 2005 and is globally banned because of its toxicity and environmental persistence. In population-based studies, women with higher levels of PentaBDE in their blood took longer to get pregnant, and their children were more likely to have developmental behavioral disorders such as ADHD.

The third most common flame-retardant found was TDCIPP (also known as chlorinated Tris), the same cancer-causing chemical that was removed from baby pajamas in 1977 and is now listed as a carcinogen under California’s Proposition 65.

Managers of the gyms reported that they had been required by local fire marshals to purchase equipment containing flame-retardants.

Carignan, now a postdoctoral fellow in environmental health at the Harvard T.H. Chan School of Public Health, noted that the collegiate gymnasts in the study reported having been gymnasts for at least 12 years and currently trained at least 19 hours per week. Elite gymnasts, such as those in the Olympics, often train for an average of 30 hours per week.

“As a former gymnast, I know that there are many benefits to gymnastics, and I don’t think anyone should quit the sport based on our findings,” Carignan said. “However, I hope our findings will alert gymnasts and coaches to take precautions to reduce their exposure, and that they will encourage their gyms to purchase flame- retardant-free equipment in the future.”

In the short term, one way that gymnasts can reduce their exposure is by washing their hands with soap and water after practice, rather than just with hand-sanitizer, Carignan said.

Over the past few decades, many gyms have been required by fire marshals to purchase equipment containing flame-retardants. However, this requirement did not consider potential health risks from long-term exposure to these chemicals, the researchers said.

Carignan is currently facilitating a further study of pit cubes and fire safety that she said will provide useful information for gyms.