Painting the quiet tranquility of water and nature

[dropcap style=”font-size:100px; color:#992211;”]S[/dropcap]amantha French writes on her website that her paintings of swimmers were initially inspired from the “consuming memories from [her] childhood summers spent immersed in the tepid lakes of northern Minnesota.”

No matter what location French chooses for her subject matter, all of her pool paintings convey a distinct mood that she qualifies as “the quiet tranquility of water and nature; of days spent sinking and floating, still and peaceful.”

Samantha French Above and below, 36×48″, Oil on canvas

Although I grew up in Los Angeles, my experiences swimming were similar to those of French. A day spent in the pool of a family friend was an event I looked to with anticipation. Hour after hour, I would entertain myself in the water: swimming laps, doing hand-stands in the shallow end, and floating on my back in the deep end. Those days could be defined as pure joy, an innocent period in my life where time felt as if it stood still and my worries about school, friends, and family were a distant concern. French’s ability to capture this particular “escape [and] subtle reprieve from the day-to-day” is to be admired as well as noted since it is not often we have the opportunity to stop and think about how we once viewed the world and to reflect upon the instances that provided us solace and comfort.

When I first discovered French’s paintings, I instantly thought about David Hockney and his swimming pool series (many of which depict pools in Los Angeles). While Hockney’s paintings greatly differ in technique (they are more abstract and stylized), they do evoke a similar reaction for the viewer, a reaction that asks one to ponder the power of water and its calming effect upon the body and mind. 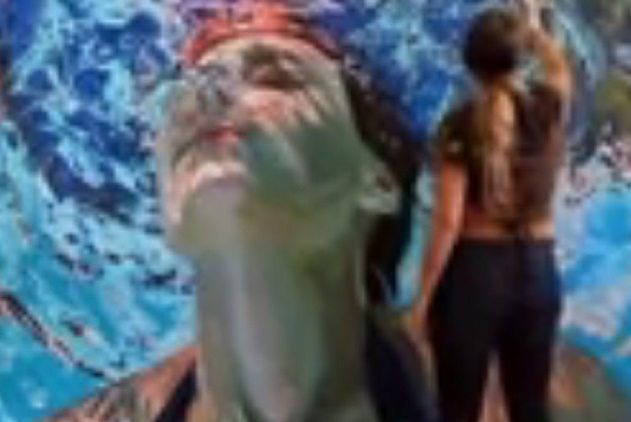 It can’t be denied that Hockney’s swimming pool paintings embody a definitive subtext and that the canvas provided him with platform from which he could explore and expose “his frank embrace of homosexual themes and his relationships with family, friends and lovers,” as explained by Hockney Biographer Christopher Simon Sykes in a 2012 article by Michiko Kakutani written for the New York Times in 2012.

Interestingly, French’s paintings invoke a much different type of reaction from her viewer, despite the similarities in these artists’ subject matter. Rather than using her work to convey a distinct message, she uses her canvas to invoke emotion in her viewer. The way she utilizes her talents to create true fluidity in each of her paintings speaks on a visceral level rather than on a political one. And in doing so, the viewer is given a gift: the opportunity to remember fond times of youth, to remember swimming in friends’ pools, and to remember the refreshment a cool pool on a hot summer day could once provide.

Previous Story:
Ketone Drink : (Yet Another) Perfomance Enhancer for Cyclists

Next Story:
Stretch, Spring…. Soap. The Unexpected Danger of Gymnastics