Don’t worry, it washes off.

Using techniques more commonly associated with street art and grafitti, environmental reseachers in the Swiss alps apply a simple paint job to remote rocks in order to monitor the rates of erosion acting upon them.

Although if it were to truly qualify as grafitti, it would need to have some sort of anti-establishment streetsy resistance message of the type used to justify the existence of what otherwise seems to the dullard masses just another piece of visual litter. Something typically topical and unreported by the biased mainstream media drones like ‘In da club, biacth!’ or ‘Hounslow thug lyf RISE YOSELF!’.

The determination of the spatial distribution of erosive processes is difficult. Especially in rough terrain the installation of measuring devices for a continuous measurement is complicated. This is why to date there are only few data available, especially on millimeter scale. In a new feasibility study, a Swiss-German team of scientists with the participation of Jens Turowski, Helmholtz Centre Potsdam – GFZ German Research Centre for Geosciences, shows how erosive processes can be visualized by simple painting.

In a gorge in the Swiss Alps close to Zermatt, the scientists applied horizontal and vertical patterns of paint on an area of thirty times five meters of rock and monitored them for three years via photographs taken from defined positions. Based on these photographs they were able to show the erosive processes in time that become visible by the removal of the paint. They call the new method “erosion painting”. Erosion painting allows for an analysis of the spatial distribution and intensity of erosive processes in a riverbed. Knowledge on this helps to better understand the physics behind erosion. The study aims at implementing the new method within process research. 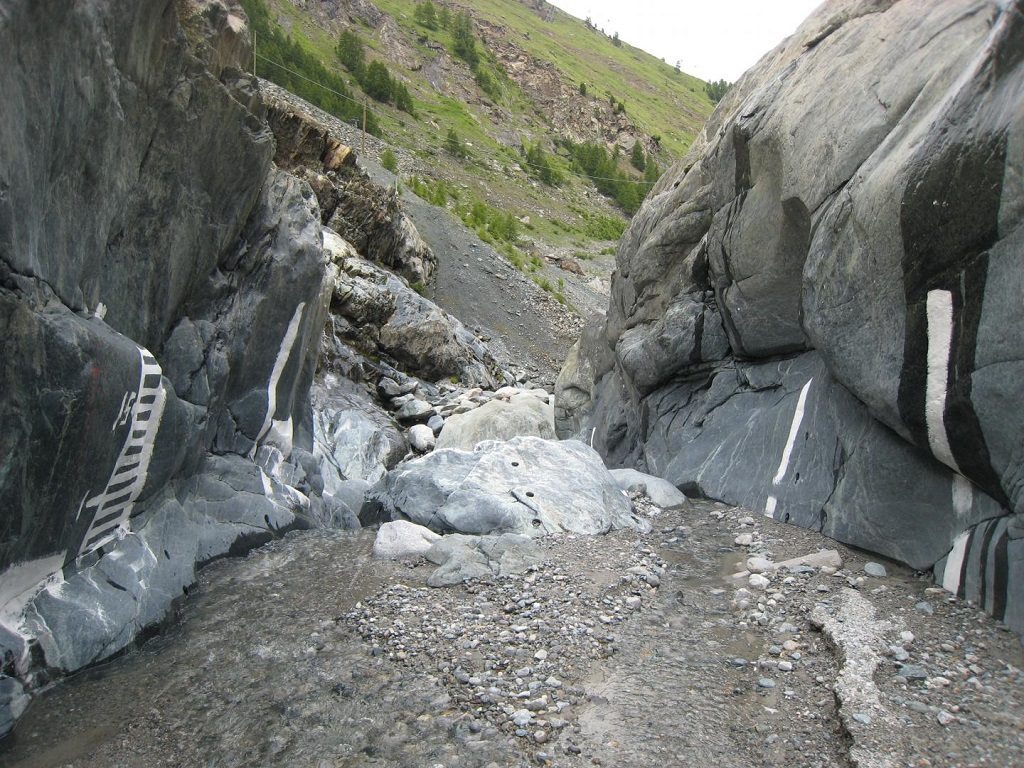 Until now, sophisticated techniques like photogrammetry, fixed monitoring stations, laser scanning, or erosion sensors had to be applied to measure and map topographic changes on rock surfaces. But “why so complicated?” the scientists asked themselves. Erosion painting needs no expensive installation, can be applied fast and on high-resolution even in rough terrain, and only requires visual inspection via photography. Jens Turowski: „Using paint is a cheap and easy method to analyze the spatial distribution of erosive processes. With this study we would like to show that this method can be applied for science”. By repeated laser scans the scientists did validate their method. This also revealed that laser scanning cannot assess erosion rates on smallest millimeter scale that is, however, made visible by erosion painting.

The scientists only used environmental friendly, water-insoluble latex paint. To minimize the effect on nature the scientists advise to only use the paint sparsely and to avoid sensitive areas.