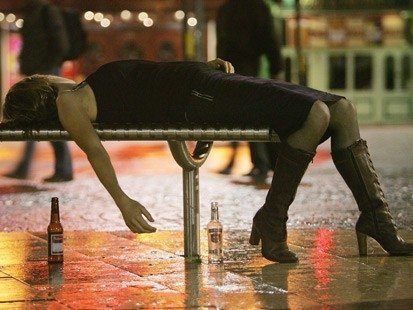 Take some students, give them a tube of Pringles, put them in front of a tv screen.

Apparently, they’ll eat less of the (actually brand-unspecified) potato chips if, at a regular interval, there’s a red one. Makes them aware that they’re pigging out, it seems. ‘I’ll just go to the next red one, then stop’, seems to be the mentality.

Wonderful. But something suggests that it might not work in all contexts. Like a red cap on every fifth beerbottle, for example? There’s a recipe for macho one-upmanship right there.

Once you pop the top of a tube of potato chips, it can be hard to stop munching its contents. But Cornell University researchers may have found a novel way to help: edible serving-size markers that act as subconscious stop signs.

As part of an experiment carried out on two groups of college students (98 students total) while they were watching video clips in class, researchers from Cornell’s Food and Brand Lab served tubes potato chips, some of which contained chips dyed red. Researchers found that the red chips served as subconscious “stop signs” that curtailed the amount of food consumed.

In the first study, the red chips were interspersed at intervals designating one suggested serving size (seven chips) or two serving sizes (14 chips); in the second study, this was changed to five and 10 chips.

Unaware of why some of the chips were red, the students who were served those tubes ate 50 percent less than their peers.

“People generally eat what is put in front of them if it is palatable,” said Cornell Food and Brand Lab director Brian Wansink. “An increasing amount of research suggests that some people use visual indications such as a clean plate or bottom of a bowl to tell them when to stop eating.”
Source: Cornell Food & Brand Lab