Virtuoso guitarist and visionary composer Steve Vai is set to release a new solo album of original material, on September 11th (in the UK) called ‘The Story Of Light’. 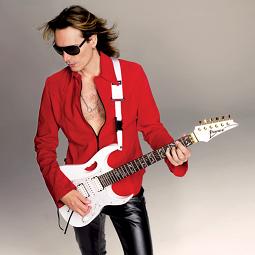 Guitar-noodling, crotch-fiddling, my-guitar-is-an-extension-of-my-body, poodlehaired rawk madness coming to UK shores this winter. Steve Vai, somehow hard to imagine in the depths of a British winter, far far from the tar-melting Southern Californian freeways that are surely his preferred lurking ground, brings his multi-necked Ibanez exotic hardwoods to, amongst other fine locations, that city forever linked with the imagery of palm-lined boardwalks and fearsome guitar shredding antics…Ipswich. Yee-haw!

Virtuoso guitarist and visionary composer Steve Vai is set to release a new solo album of original material, on September 11th (in the UK) called ‘The Story Of Light’.

Although The Story of Light is largely instrumental, the album does feature guest vocalists, including singer songwriter Aimee Mann—dueting with Vai on “No More Amsterdam,” which she also cowrote—and Beverly McClellan, a season one finalist on The Voice (USA). McClellan appears on “John the Revelator,” a track inspired by a vintage recording of blues singer Blind Willie Johnson, whose acid soaked vocals are in the mix as well. Other highlights include the title track which opens the album, “Gravity!Storm,” “The Moon and I,” and “Velorum.”

Throughout, three time GRAMMY winner Vai’s lead guitar is as lyrically resonant as it is technically masterful, his licks and solos bending sounds and in listeners’ minds in equal measure. The Story of Light follows the journey of a man driven mad by grief, intertwining tragedy, revelation, enlightenment, and redemption.

Following up the 2009 live album Where The Wild Things Are, The Story of Light is Vai’s 16th solo effort. In support of its release, Vai will begin a tour of North America on August 15th in Fort Lauderdale Florida, accompanied by his band—who are also featured on the new album: Dave Weiner (guitar), Jeremy Colson (drums), Philip Bynoe(bass),and Deborah Hensen (harp, vocals, keyboards). European dates are expected later in 2012.

Steve will be playing a regional UK tour this December.

Tickets go on sale at 9am on Friday 10th August priced at £27.50 regional / £28.50 London and will be available from www.ticketmaster.co.uk or www.livenation.co.uk