Back in the mid 1990’s, Hira Raten Manek, a native of southern India, took off his shoes, dug his toes into the mud and stared up at the sun. 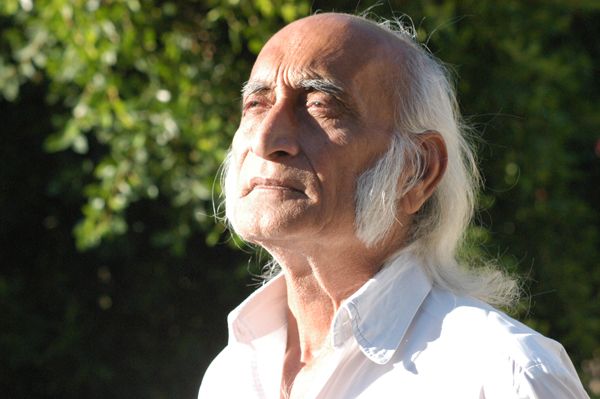 Jainists and Native Americans, Manek stopped eating, and for eighteen years he’s been the leading expert on sun gazing, a natural process of opening your eyes to the sun and absorbing the nutrients and vitamins necessary for the body’s survival from its rays.

Hira has not eaten since 1995. Sometimes, if a social situation finds him, he will drink tea, but between engagements his liquid consumption is strictly water.

Three different studies have monitored Manek and his diet since 1995. Scientists directing the first session on Manek watched him not eat for 211 days.  Scientists got together again in 2000-2001 and spent more time watching him not eat. The second study lasted 411 days. According to an article written in the Times of India, during the fast Manek said he lived only on “boiled water and the star closest from the earth”.

The first two observations were conducted in India. The third test has little documentation, but apparently Hira was brought to Philadelphia. Under the supervision of doctors from the Thomas Jefferson University and UPenn, Hira was studied again. The test lasted 130 days. No one saw him eat.
The question being asked in the West isn’t why?, but how?

With minor exceptions in extreme climates, everything living needs Vitamin D3 to grow. When the sun goes away plants go back into the ground, animals go to sleep and humans stop smiling. If you look at the brain like a machine, a machine needs fuel. Without sun the fuel runs out. We start to act funny. The serotonin levels go down.

The Pineal Gland is rumored to be many things. It is definitely the most important part of our Central Nervous System- a small gland shaped like a pinecone tucked right between the “left” and “right” brain. It controls melatonin output (a product of serotonin)- the chemical that keeps us on a sleep schedule. The Pineal Gland is also said to be our third eye. A spiritual beacon. The seat of the soul.

The British Journal of Opthalmology refers to it as, “the lonely eye”. The list of conspiracies runs long. What is certain about the brain, though, is that without the sun we’re not happy.

Staring at the sun seems to correlate directly with spiritual growth. Once the Pineal Gland is stimulated Hira Raten Manek’s website says, “We can achieve any results we want”. For some reason the sun can only enter through the eye. Not the mouth. Or ears. Once enlightenment has begun to be achieved, hunger will wane, and natural nourishment will take over.

Manek isn’t a pioneer, and he’s not pretending to be. He wants the world to know sun gazing has been practiced for thousands of years. The Cannanites worshipped Shapash, a lion-headed woman with the sun as a third eye. In Matthew 6:22 it is written, “The light of the body is the eye: if therefore thine eye be single, thy whole body shall be full of light.” Marsilio Ficino, a philosopher of the Italian Renaissance published The Book of the Sun in the 1400’s. In the fourth chapter he wrote, “the strength you receive from the Sun, you will almost seem to have found God, who placed his tabernacle in the Sun”

There are critics. Mainstream ophthalmologists maintain that sun staring is probably the worst idea, ever. Warning children to avert their eyes from the sun is standard parenting. The Wikipedia page for sun gazing dedicates nine sentences to discourage practicing.

Yet no conclusive evidence seems to exist that sun gazing, done properly, is harmful. Most of the sources cited on Wikipedia don’t link to any pages with information. In the 60’s, at least two newspapers printed stories of LSD users melting their eyes while staring at the sun. Both stories were proven hoaxes. An essay in a medical journal written by Lawrence A. Yannuzzi, MD, says that vision loss will occur, but damage is also reversible.

So how do you sun gaze properly?

There are “safe hours”. Listed on Hira Raten Manek’s website, solarhealing.com, a one hour window exists between each sunrise and sunset. During this time your eyes are safe from UV and IR rays.

On the first day exposure should only last ten seconds. The second day twenty seconds. Increments of ten seconds should be added each day following. On the three month anniversary you will have hit the fifteen minute mark.

There is only one rule: no shoes. You must gaze barefoot, on any surface but grass.

The Sun Gazing ritual is split into three cycles on Manek’s website. Months 1-3: Depression and fear will disappear. Months 3-6: Disease will end and organs will rejuvenate. From months 6-9 hunger will leave. The sun will begin feeding you. After nine months Manek encourages you to give up Sun Gazing. Even he fears for your eyes at this point. Now, after more than 120 hours of staring into the sun your brain will be going through withdrawal without it. A 45-minute barefoot walk everyday will reheat the Pineal Gland.

The human eye can see seven colors. Manek says there is no rainbow in the sky, the rainbow is always occurring, naturally, in your own eyes. “Observe below a source of flowing water as the sun moves above. There you will see a rainbow.” His website says, “the more you are away from nature, the more there is a cause for illness.”

If you look at

We start to act funny

The real lesson seems to be that there is one central belief system allowed on earth. We are told to eat, so we eat. We are told to look away, so we do. But we never asked how it all came to be this way.

We see reptiles grow under UV lights. Plants bend their branches in odd ways to reach the sun’s light. We see the whole natural world ruled by one strange circle in the sky yet we stay drilled by a belief system that says “We’re in control. We make our own rules”.

It’s the same insane ethic that commands the military or any street gang. It’s a belief system that keeps everyone “safe” by encouraging obedience. But by keeping everything “safe” and terrestrial we are watching any kind of progress get eliminated. Applying rules to science is an assassination on reason.

We appear to be in the midst of another century spent without understanding the hows and whys of our existence.

That is a “reality” I find much more terrifying than sunburn

About Scott Laudati 31 Articles
Scott Laudati lives in New York with his Boxer, Satine. His collection of poems "Hawaiian Shirts in the Electric Chair" has been published by Kuboa Press. Visit www.ScottLaudati.com for less professionalism and angrier essays.