A Sound So Loud it Bends Light 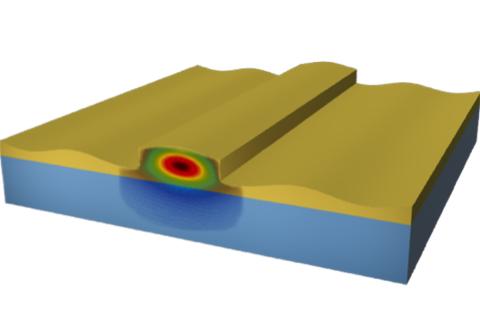 [dropcap style=”font-size:100px; color:#992211;”]U[/dropcap]niversity of Minnesota boffins get up to some ear-shredding antics with microchips and suchlike.

The important bit though, is that music writers now have ‘SO LOUD IT BENDS LIGHT!’ to add to their metal reviews, which is some relief for the shamefully overworked ‘Heavier than a collapsed neutron st

During a thunderstorm, we all know that it is common to hear thunder after we see the lightning. That’s because sound travels much slower (768 miles per hour) than light (670,000,000 miles per hour).

Now, University of Minnesota engineering researchers have developed a chip on which both sound wave and light wave are generated and confined together so that the sound can very efficiently control the light. The novel device platform could improve wireless communications systems using optical fibers and ultimately be used for computation using quantum physics.

The research was recently published in Nature Communications, a leading research journal.

The University of Minnesota chip is made with a silicon base coated with a layer of aluminum nitride that conducts an electric change. Applying alternating electrical signal to the material causes the material to deform periodically and generate sound waves that grow on its surface, similar to earthquake waves that grow from the center of the earthquake. The technology has been widely used in cell phones and other wireless devices as microwave filters.

Sound wave passing across an integrated optical waveguide, overlaid with a color map of the light field in it.

“Our breakthrough is to integrate optical circuits in the same layer of material with acoustic devices in order to attain extreme strong interaction between light and sound waves,” said Mo Li, assistant professor in the Department of Electrical and Computer Engineering and the lead researcher of the study.

The researchers used the state-of-the-art nanofabrication technology to make arrays of electrodes with a width of only 100 nanometers (0.00001 centimeters) to excite sound waves at an unprecedented high frequency that is higher than 10 GHz, the frequency used for satellite communications.

“What’s remarkable is that at this high frequency, the wavelength of the sound is even shorter than the wavelength of light. This is achieved for the first time on a chip,” said Semere Tadesse, a graduate student in the University of Minnesota’s School of Physics and Astronomy and the first author of the paper. “In this unprecedented regime, sound can interact with light most efficiently to achieve high-speed modulation.”

In addition to applications in communications, researchers are pursuing quantum physics applications for the novel device. They are investigating the interaction between single photons (the fundamental quantum unit of light) and single phonons (the fundamental quantum unit of sound). The researcher plan to use sound waves as the information carriers for quantum computing.

Source and Image: University of Minnesota

Next Story:
Cast of Characters : The Mad Cop [Lesotho]