Something worth finding? Augmented Reality

Pokémon has 65 million monthly users and makes use of ‘augmented reality’ but does it really add if anything to its users lives?

Augmented reality has become popular in recent years (AR) is a direct or indirect live view of a physical, real-world environment whose elements are “augmented” by computer-generated information, ideally across multiple sensory modalities, including visual (primarily), auditory, haptic, somatosensory (such as pressure, pain, or warmth), and olfactory (smell). Pokémon Go utilises this technology, for now mainly visual overlaying and has been in the news recently (see notes) because of an update to its software.

of corruption…the trap of the invisible,

of the visible and finally the trap of the image,” Alain Badiou

There are 65 million monthly users (recent figures) and the revenue produced to date exceeds 1.2 billion so Pokémon is going nowhere and is likely to be using augmented technology as it develops further. Other Pokémon facts can be found here, below Natalie Andrews explores the topic.

“Pokémon Go (stylized as Pokémon GO) is a free-to-play, location-based augmented reality game developed by Niantic for iOS, Android, and Apple Watch devices. The game is the result of a collaboration between Niantic, Nintendo, and The Pokémon Company. It was initially released in selected countries in July 2016. In the game, players use a mobile device’s GPS capability to locate, capture, battle, and train virtual creatures, called Pokémon, who appear on the screen as if they were in the same real-world location as the player. The game supports in-app purchases for additional in-game items,” Wikipedia entry.

The phenomenon of ‘Pokémon Go’ came to my attention simultaneously from two different places, one a news story about adults and children being at risk of accidents in public places as they stared through their phones and devices to locate small digital style creatures,

The other my children downloading the app onto their phones during a car journey and finding a Pikachu on the seat beside them as we stopped at some traffic lights.

“…every childhood achieves something

great and irreplaceable for humanity,”

There is certainly something novel about the way the digital world is projected into reality making it seemingly more vivid, jolly and magical for children and adults alike (most Pokémon go addicts are adults) The criticism of Pokémon go being a risk to people’s safety because of traffic accidents while tragic is stealing all the headlines,

“A second deadly vehicle accident in Japan has been blamed on “Pokemon Go,” Kyodo news agency has reported. The first death was reported on Tuesday, when police said that a man playing the augmented-reality game while driving a small van had hit two pedestrians in Tokushima, killing one, a 72-year-old woman,” CNBC news 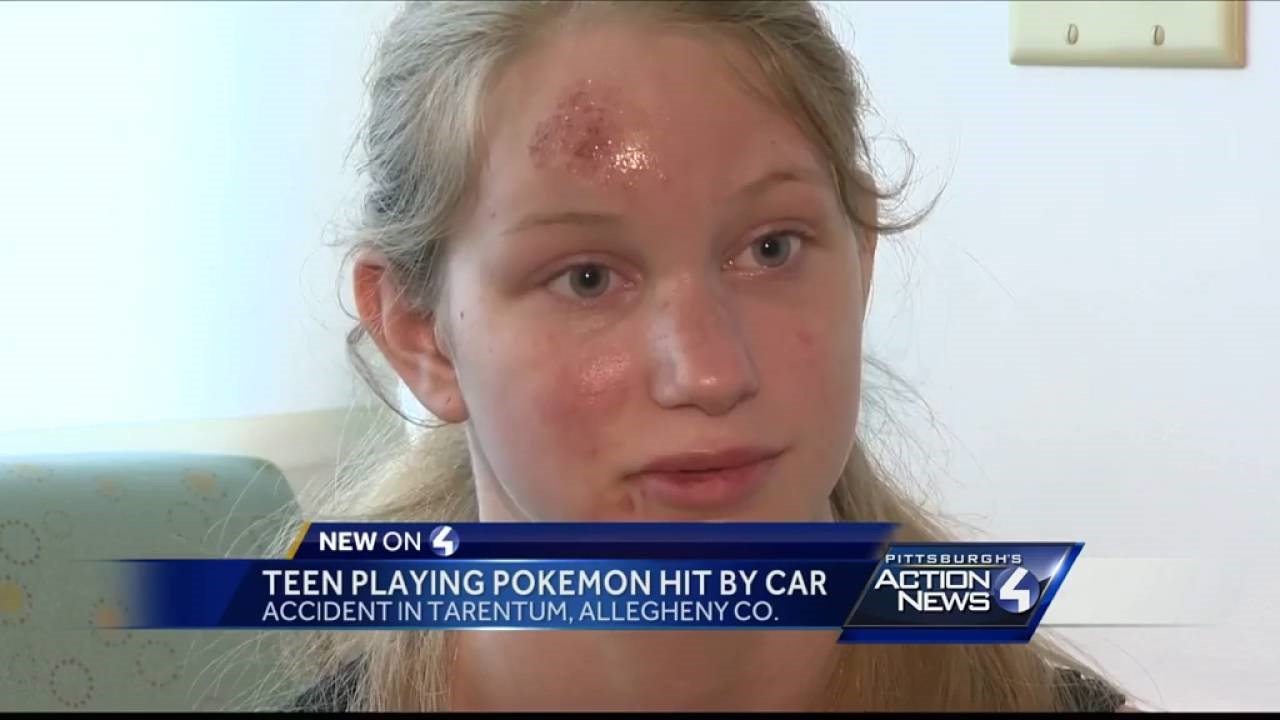 Not just Japan, America two among others reports this link between the game and injury. (YouTube still)

While it’s awful that any distracted person should be injured this headline as the main down side to the game is allowing what’s really at stake to go un-analysed. The physical risk of moving into space perhaps a road or in some extreme cases people have broken into homes to capture the digital creatures is unsettling but it represents nothing new, carelessness, desire for consumer products and desperation have long been problems for human beings before Nintendo launched Pokémon Go. (how many people have been injured while texting, or broken the law for a pair of trainers)

Equally as superficial is the claim by fans of the game that its bringing people into the environment, offering exercise to children and uniting people in a shared experience… this level of debate is not useful it’s like claiming that the remote control encourages hand eye coordination and strengthens the index finger…yawn!
There is more at stake than another opportunity for clumsiness, greed and/or accidental exercise,

“every childhood achieves something great and irreplaceable for humanity. By the interest it takes in technological phenomena, by the curiosity it displays before any sort of invention and machinery, every childhood binds the accomplishments of technology to the old worlds of symbol,” Walter Benjamin, The Arcades Project

On first reading the Benjamin quote above you might think that Pokemon Go would fit neatly into what Benjamin is saying and that by appealing directly to children or the child in us, Pokémon Go is a more potent bit of phenomena for us to marvel at however as Mellamphy explains below,

“Benjamin saw in child’s play and children’s playthings a potential ‘playing out’ and ‘recollecting’ of that which has been dropped, left behind, forgotten and forsaken,” Dan Mellamphy and Nandita Biswas Mellamphy

This idea of redemptive play which transforms meanings and makes use of otherwise forgotten things is not possible in Pokémon Go which instead puts new digital products into or rather onto reality rendering reality as nothing more than a background a context for the focus of the game, the prize, the Pokémon.

In this way the radical aspect of a child’s play is frustrated by shifting focus from actual reality to the augmented filtered reality, the Pokémon for example cannot be held, moulded, added too or incorporated into any other scenario like an action figure or an old chess piece or a brass ornament or a sofa.

The ephemeral nature of digital phenomena is misleading since it absolutely fixed, the Pokémon which is the object of desire is totally fixed in its ‘game context’ in this way Pokémon Go is putting order into the radical free play of the child’s experience.

This order is conformity no matter how beautiful, jolly and vivid its conformity and such a level of conformity in ‘play time’ is depressing for children perhaps more so as its formative and conditioning in the way the game teaches the player to fetishize, and collect all the creatures, for adults whose play time is limited it simply uses it up in the pursuit of a corporate construct idea of fun.

This is important since what Benjamin is really getting at is that the capacity on show when children play is our creative ability, the ability required for all great innovation being honed and exercised. All animals do this, play at serious business think of lions ‘play fighting’ in preparation for hunting and protecting territory.

At some point in the past a simple human creature looked at stick and transformed it into a skewer for fish or a weapon to subdue a larger opponent. When children free play this particular ability to transform matter is being exercised the creative muscles it develops provide humans with our natural advantage our creative intelligence

The relationship that the game has with space is interesting and innovative in that it does extend the territory of digital play or gaming from the lap top or computer into actual space and it does require that players move around actual space in order to be in the games world.

As mentioned briefly earlier the nature of the game is such that the luminous creatures glow out in extreme colour from the phone becoming the total focus of the player this is obviously appealing to young and old and may account for the accidents and distracting elements that have hit the press in recent weeks.

The point is that as you walk around the space there is no meaningful relationship with the environment needed the background space is an irrelevance and any energy for more important pursuits is drained by the activity, the philosopher Alain Badiou accused like Socrates of corrupting the youth (encouraging political action and resistance) responds to an interviewers contradiction about the activity of the young,

“Interviewer: Are you sure, Alain Badiou? Every day for weeks young people have been meeting up in France and elsewhere, coming out onto the streets with a sense of urgency … not to attack the Labour Law but to play Pokemon Go.

Alain Badiou: Pah! Well that’s the corruption of corruption, if I might put it like that… To have the will to want to do something and then slip into a harmful trap — the most remarkable kind, the trap of the invisible, of the visible and finally the trap of the image. And that’s also something we can say about youth. They still cover their heads [the verb he uses can mean either put on a helmet or put on headphones], but no longer to fight the police, but to listen to nonsense. And a youth that is very sensitive to the world of images — well, that’s an old fight of Plato’s, the fight against images. He foresaw that already, that the world was like a great cinema, people watching the shadows in the cave,” excerpt from an interview with verso books.

Free time, free play is essential for the development of character and race alike the game is superficial, unchallenging yet addictive seductive and demanding. 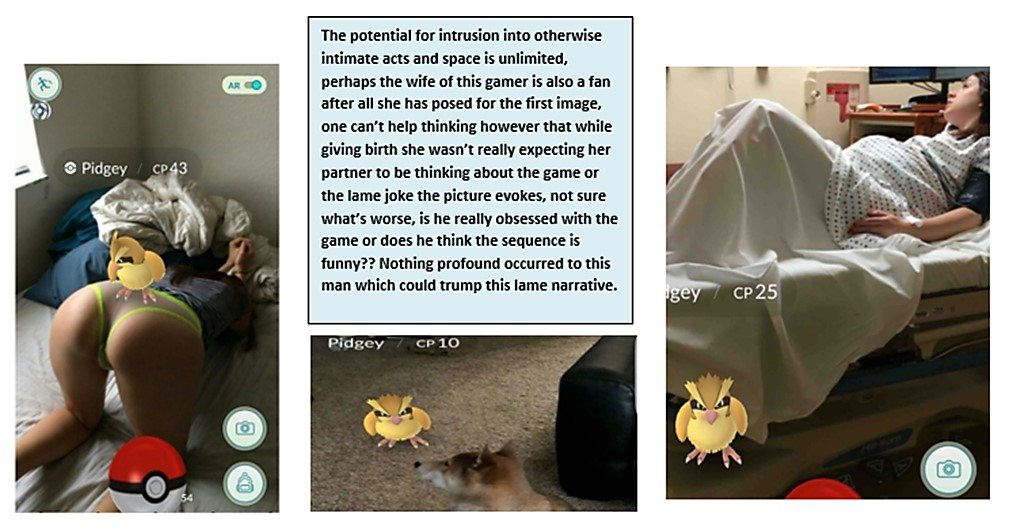 Like the prisoners in Plato’s cave alluded to in the Badiou interview the game is all consuming and it rewards on its own terms the conformity of its collecting, consuming players. Action effects thought as well as the other way around, when our actions become superficial then our thoughts become foolish, pan the photographs above, not evil, not cruel just stupid, superficial idiotic…fun in the midst of a serious and life changing event neither sex carnal or romantic or birth is sacred for the player only the public joke communicated via social media that says ‘I’m fun’ is on his mind.

Upon seeing a homeless man in Luton I imagined how banal it was, how normal to see a little heap in a corner heaving slowly up and down, this sad image was real and not shocking or exciting at all totally at home in the fabric of the background.

The prospect of seeing such a figure would never marshal the sort of commercial forces that Pokémon Go does there would never be people rushing out to interact on mass in the same way. Human life is both boring and dangerous, real people are inconveniently smelly, violent and unpredictable the comforting world of the Pokémon is ever positive, ever bright and predictable, safe.

I don’t claim to be active in the rehabilitation of or assistance of homeless people it simply highlighted how the game sits on the reality like a gaudy mask and that the idea of looking for Pokémon is absurd.

Taking my picture of the man (I had asked permission first) I felt I owed him something, I bought him a coffee for his inconvenience. I definitely didn’t change his life but I do recognise his existence and that reality is not improved by shiny distractions.

I think that insight was something worth finding.