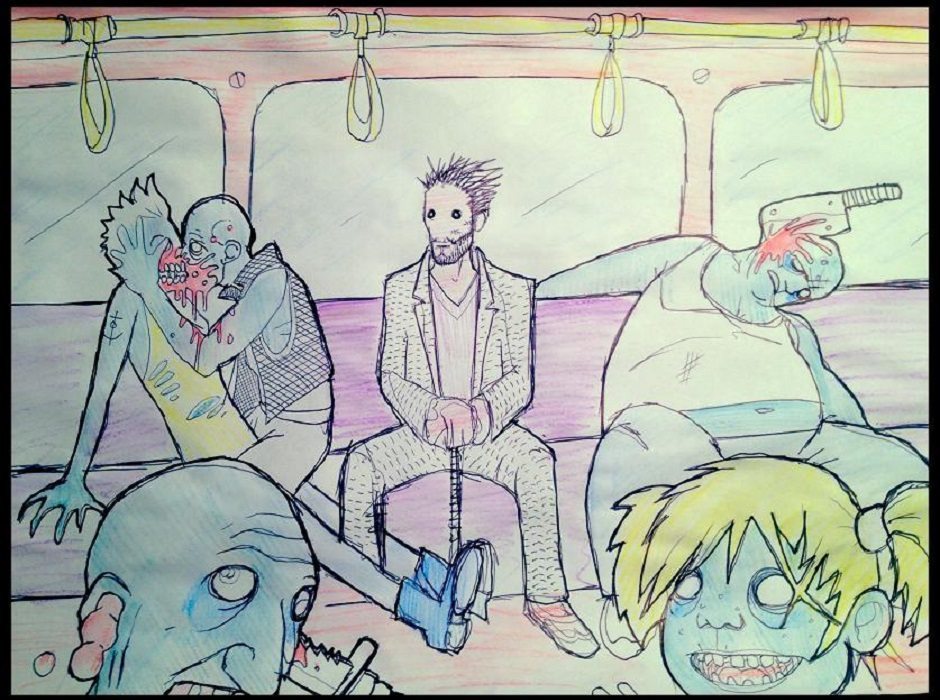 [dropcap style=”font-size:100px; color:#992211;”]S[/dropcap]ocialogical doomsooths love to point to the impersonal misanthropic tendencies of public transport commuters as the evidence of society’s growing insularity and dehumanisation. There is no shared experience, they lament.

But everyone flinches when there’s a big wet sneeze. Tough love.

When viruses invade naïve host populations and are propagated predominantly by local transmission, we expect to observe wave-like spread across geographic space. As viruses evolve rapidly, because of their high mutation rate, these wave-like patterns of local transmission (from person-to-person and village-to-village) should generate wave-like patterns of genetic variation where the geographic distance between locations and the genetic distance between variants is positively correlated.

In today’s world, however, transmission patterns are more complicated, as human pathogens also ‘travel’ by road, rail, and air. To examine how genetic variation correlates with spatial distribution in a highly mobile society, Brooke Bozick and Leslie Real, from Emory University in Atlanta, explored whether measures of distance defined by airline and commuter transportation networks can explain the population genetic structure of seasonal influenza viruses within the U.S.

Analyzing the travel networks, the researchers calculated that during the flu season, approximately 1.6 million people travel along the interstate aviation network per day, and that most U.S. states are well connected to most other states. More people (over 3.8 million) travel daily across the interstate ground travel commuter network, but the vast majority of connections here occur between neighboring states, and more so in the Eastern than in the Western U.S.

Next the researchers analyzed the genetic variation of flu viruses (both the H3N2 and the H1N1 viruses) from viruses isolated and classified over 10 seasons: from 2003/2004 to 2012/2013 across the U.S. They then compared genetic distance (which is greater between sequences that are more divergent) with (1) geographic distance, and with the alternative distance measures of (2) interstate airline connections and (3) interstate commuter connections. ting that the relative magnitude of host movement over space has a greater influence on the route of pathogen spread than the geographic proximity of sampling locations.

The researchers say that to their knowledge, this is the first evidence that population structure (as revealed by travel networks) for seasonal influenza is detectable at the scale of the continental U.S. In contrast, population structure was not detected in most of the data analyzed for H3N2 virus, even though both geographic distance and commuter distance were, at times, correlated with genetic distance. It might be that the current resolution of the origin of the virus variants (by state rather than by county) is not sufficient to detect a correlation between the usually more aggressive and fast-spreading H2N3 virus and travel patterns.

The researchers conclude that while recent findings have shown that the aviation network plays an important role in the world-wide transmission of seasonal influenza, their results suggest that when population structure is detectable, it is the commuter network that is of greater importance at more regional scales. Discussing the public health implications, the researchers say that the detection of network structure implies that patterns of epidemic spread are, to some extent, predictable and point out that ‘the absence of predictability is problematic for the design of containment strategies, since it suggests that the annual seasonal spread of influenza within countries is highly variable and depends heavily on chance events.’

The findings here, based on genetic data, are in agreement with previous research using influenza-like illness case data; both show that patterns do exist, with strongly connected states having similarly timed epidemic peaks and similar genetic variants circulating. The patterns they found are likely influenced by states with many commuters, and the researchers suggest that ‘the identification of these states, as well as network pathways that contribute substantially to influenza spread, is an important next step for epidemiological research.’

Source: Eurekalert/PLOS
Illustration by Dan Booth not to be reproduced without his express prior permission.