Good goods: Why Small Males Might Be More Attractive

[dropcap style=”font-size:100px; color:#992211;”]T[/dropcap]he powers of attraction in the world of insects may have some relevance to the human realm, but in this case, the logic seems flawed.

Female beetles seek out smaller mates because it’s less likely that they’ll get into fights.

Clearly, there’s no six-legged equivalent of the 5’2″ hardman with the mad eyes, Napoleon complex and rabid terrier instincts. We’ll stick with the taciturn gentle giant, thanks very much.

Female burying beetles are more attracted to small partners because they are less likely to get into fights, a study by researchers at the University of Exeter has found.

The research published today in the Journal of Evolutionary Biology found that while small male beetles were more successful at attracting female mates to the breeding ground of an animal carcass than larger males, they didn’t make better parents.

In the first study of its kind carried out in the wild, researchers tested whether individual male burying beetles — known for being exceptionally good parents in the insect world — would help look after their current family for longer if they had clues that it might be difficult to find, or compete for, other mates.

The male beetles were placed in the wild with a dead mouse, an ideal place for them to mate and rear a family, and where they called for mates by releasing pheromones.

Unexpectedly, small males were more successful than large males at attracting a female partner to the carcass than a male rival, and researchers believe that this is because they attracted less competition and potential for squabbles.

Dr Paul Hopwood of the Centre for Ecology and Conservation at the University of Exeter’s Penryn Campus, Cornwall, and lead researcher on the project, said: “These results show that by being choosy about their males, female burying beetles might avoid complicated relationships involving male fights and extra female competitors.”

The research, funded by the Natural Environment Research Council (NERC), allowed male burying beetles to grow up and mature in the laboratory in groups with different ratios of males and females. This was to give individual males clues to the likely competition they might face, and the availability of females in the future before placing them with a carcass in the wild.

The findings showed that when the first beetle to arrive was female both beetles quickly settled down and bred as a pair. However, when a male turned up first, relationships got complicated and messy, when competition from other males led to fights.

The apparent allure of small males also led to them breeding more often in ‘faithful’ pairs than larger males. 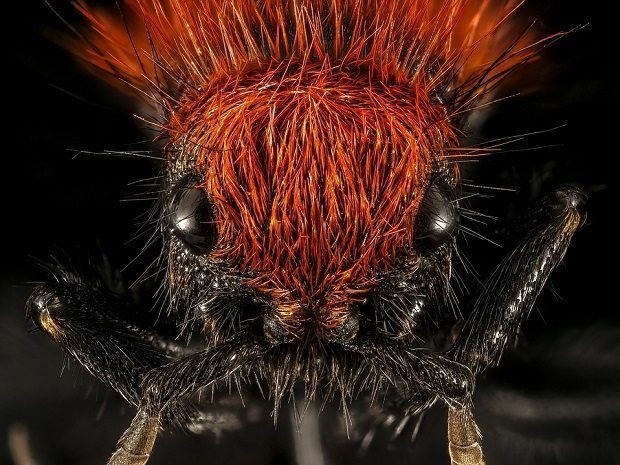 In many species large males have more mating success than small males, either because females find them more attractive or because they can use their brawn to intimidate small rivals. They are also more likely to have more sexual partners and be less committed fathers.

In this case small males were more attractive but did not respond by being better parents. “We found no evidence that males of any size, or from any social background, were more committed parents,” added Dr Hopwood.

The effect of size and sex-ratio experiences on reproductive competition in Nicrophorus vespilloides burying beetles in the wild by Paul E Hopwood, Allen J Moore, Tom Tregenza and Nick J Royle is published in the Journal of Evolutionary Biology.

Previous Story:
With a Rictus Grin and Another Pint: Surviving The Totally Democratic Bar

Next Story:
All Heroes Must Fall. Farewell to a Space Oddity (David Bowie)