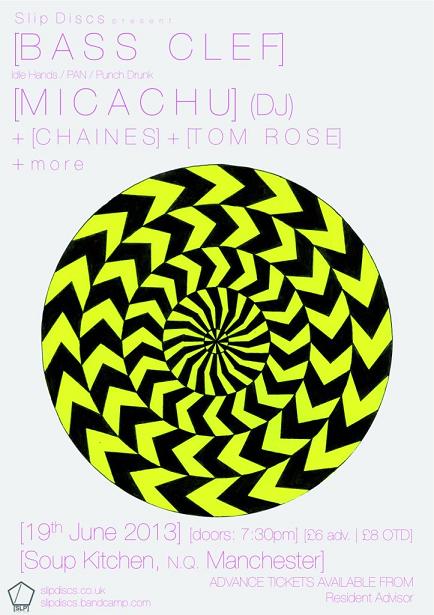 Having released on Idle Hands, Punch Drunk, and his own Magic Dreams imprint, Bass Clef has a forthcoming 12” on Bill Kouligas’ PAN – due in June.

Mica Levi – aka Micachu – has quickly set out her stall as one of the most original, challenging and unique artists in the country: alongside the universally acclaimed debut ‘Jewellery’ (Rough Trade), Micachu has received commissions from the London Philharmonic Orchestra, the London Sinfonietta, and the Barbican, and toured with Deerhunter, Arcade Fire and Spoon. Halfway through the making of ‘Jewellery’ which she worked on with Matthew Herbert, she joined forces with Raisa K and Marc Withasee to form Micachu and the Shapes, resulting in half that album being recorded with The Shapes and half of her own electronic solo work. Since then the band have toured extensively in the U.S., Europe & Australia.

Caroline Haines and Tom Rose present a split set following SPLIT [SLP004]. Both artists working within electronic and contemporary composition, the pair’s music form a dialogue testament to sharing the same stage countless times over the past year. Chaines’ idiosyncratic vision embraces dislocated drums, swathes of distortion, and freakish manipulations of her own voice. Tom Rose navigates dry synthetic drums which coalesce into toppling patterns and waves of synthesiser, caked in debris.

The link for tickets is here

Previous Story:
In Defence of Art

Next Story:
Legends of the Canyon : UK Release