The refugee crisis is again an inspiration for the artist Ai Wei Wei, who is determined to remind us of the suffering of desperate peoples.

[dropcap style=”font-size:100px;color:#992211;”]T[/dropcap]he international Chinese artist Ai Wei Wei, once tortured by his own government for speaking out against corruption and brutality has had a long engagement with the refugee crisis producing works such as ‘Law of the Journey’ below. Wei Wei can relate to the seemingly hopeless position of the migrants and refugees as he and his family suffered banishment, incarceration and harassment at the hands of Chinese forces. His latest limited edition works will be sold to benefit the refugees and continue his humanitarian quest to increase visibility of the crisis,

“Law of the Journey, exhibition is a “multi-layer” series of projects inspired by the artist’s time spent in over 40 refugee camps during the past year. Known for being an outspoken activist for human rights, he describes the current global refugee crisis as a ‘human crisis.’ An all-black 230 feet long inflatable boat carrying 258 faceless refugee figures hangs at the heart of his new exhibition located at the National Gallery in Prague,” The Unbiased Writer, 2017 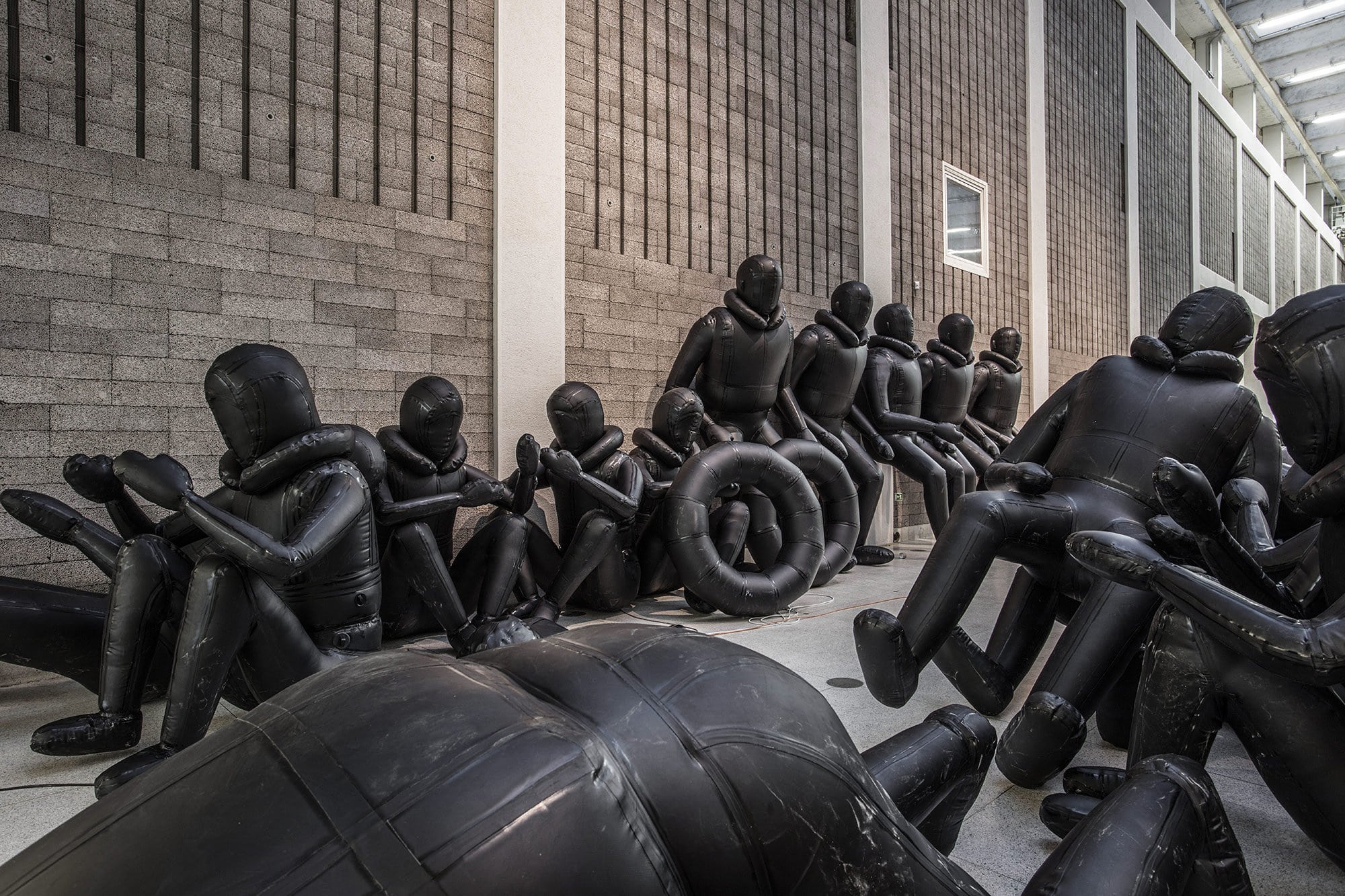 Law of The Journey by Ai Weiwei

His works around this theme have given monumental public art a conscience and certainly show more than a passing interest in the suffering of others; the sad faceless figures of ‘Law of the Journey’ are no particular race or sex and remind us that any culture could suffer via war or environmental disaster a similar fate to the piteous figures depicted above,

“Chinese artist and activist Ai Weiwei has recreated the image of drowned infant Alan Kurdi that in 2015 became the defining symbol of the plight of Syria’s refugees. For the recreation, Ai lay on a pebbled beach on the Greek island of Lesbos. His pose was similar to that of Kurdi’s lifeless body, which washed up on a beach near the Turkish town of Bodrum and was captured in a September 2015 photo,” Monica Tan 2016 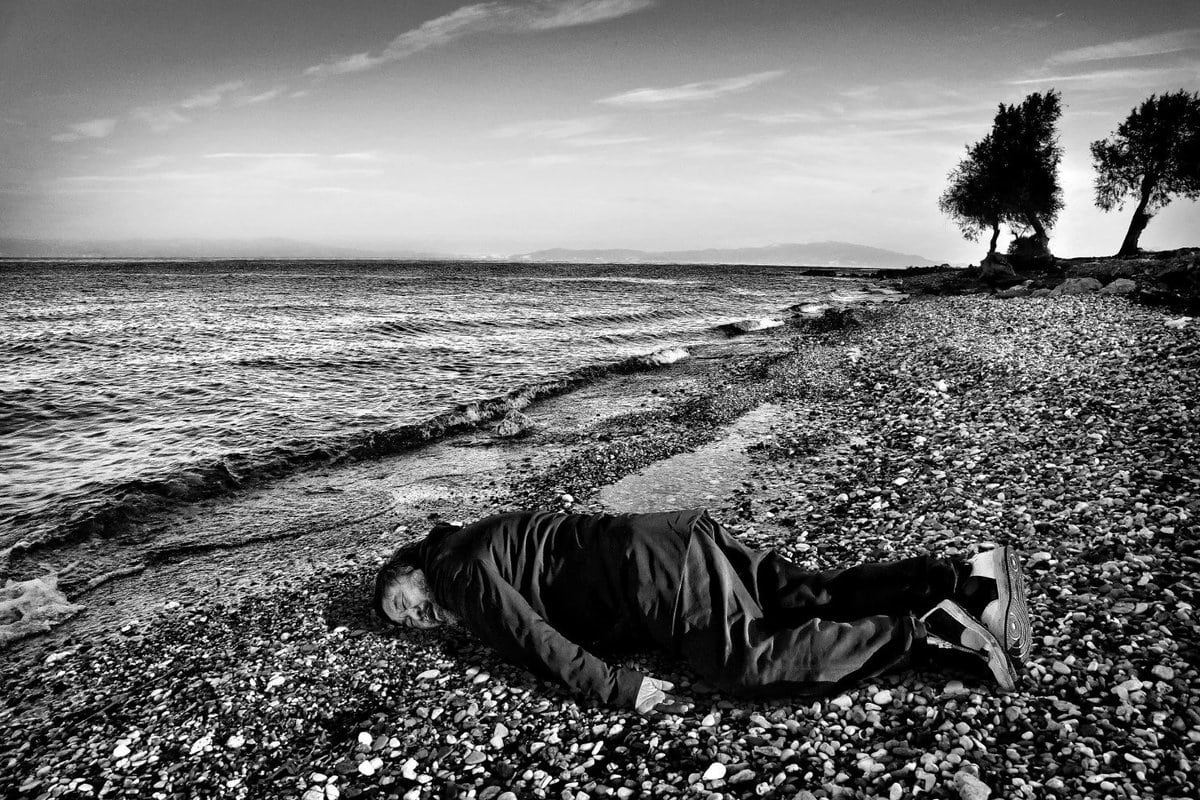 Ai Weiwei on the beach at Lesbos.

The media does draw attention to the crisis of course and following the death of a child in 2015 there was a public outcry inspiring Ai’s photograph above; this however is mirrored by a hardening across Europe and in America (think of the screaming children in cages covered in tinfoil in Texas) among certain governments reluctant to tackle the growing problem which is not simply about a single war but massive inequality around the world. Even in Germany where the support for refugees has been more robust Angela Merkel is coming under significant pressure to reduce the inflow of migrants and refugees.

Ai Wei Wei certainly cares about the issue but we are left wondering what if anything is being achieved and if the legacy of international human rights can be truly maintained in the face of such a crisis.

Timed to coincide with World Refugee Day today (20 June), the activist artist Ai Weiwei has partnered with the New York-based non-profit Public Art Fund (PAF) and eBay to release a series of six limited edition banners to bring awareness to the refugee crisis and benefit humanitarian organisations. The banners—whose timeliness is heightened by the separation of parents and children at the US border—show portraits of immigrants and refugees, and are being offered on ebay.com/aiweiwei through June 27 (or until sold out) in editions of 500, sold individually for $750 or in a series for $4,500. The posters are half-scale versions of banners installed across New York City last year in Ai’s PAF-commissioned Good Fences Make Good Neighbours project. Proceeds from the sale will benefit the PAF as well as the USA for UNHCR (United Nations High Commissioner for Refugees) and the International Rescue Committee. Weiwei says that work is “a reminder of the artist’s responsibility to defend the understanding that all humans share the same meaning of life”. 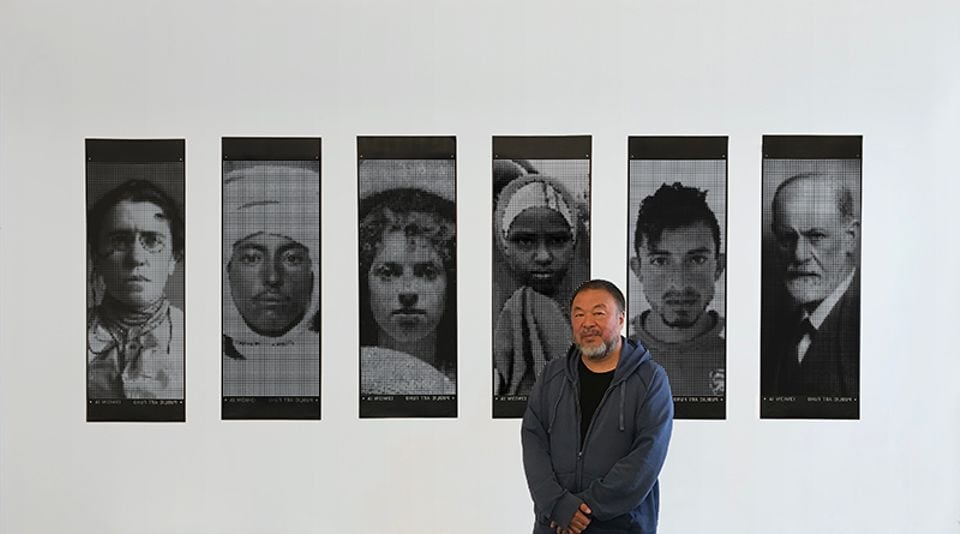 Next Story:
Want To Learn Faster? Get Chomping Happy Pills