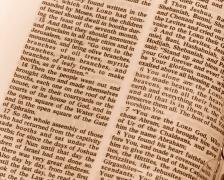 Interesting piece on the development of colonial systems and the social order that is created.

University of Cincinnati research is revealing how gender and civil status shaped devotional networks in 18th century colonial Latin America, and how economically independent, single women played a key role in shaping the spiritual economy of their communities. Brianna Leavitt-Alcántara, a UC assistant professor of history, will present her research on Sunday, Jan. 6, at the annual meeting of the Conference on Latin American History (CLAH), in New Orleans. The conference is held in conjunction with the 127th annual meeting of the American Historical Association which focuses on Religions of the World as well as Latin Culture.

Leavitt-Alcántara’s presentation, “Devotional Networks and Spiritual Geographies: Single Women in a Spanish American City,” focused on a sample of 100 legal will documents from Guatemala City over a 20-year period, from 1750-1770 – when Latin America was undergoing a dramatic transformation in politics and religion.

The wills revealed how single and widowed women from diverse social backgrounds positioned themselves as pious benefactors bestowing patronage on priests, while at the same time invoking the assistance and support of those same priests to settle their spiritual and worldly affairs.

Leavitt-Alcántara explains that most research on women and religion in colonial Latin America has focused on nuns, holy women and those accused of religious “deviance.”

“We know far less about ordinary women, in large part because they are much harder to locate in available sources.” However, Leavitt-Alcántara points out colonial Latin-American cities were often populated by more women than men, because cities privileged women’s work in domestic service and petty commerce. This demographic situation, in conjunction with other social and cultural factors, resulted in relatively high numbers of single women, widows and female-headed households.

Although it was socially acceptable for women to be unmarried in colonial Latin America, Leavitt-Alcántara says it was also a difficult position for women economically, socially and culturally, as a result of the patriarchal society.

“Single and widowed women faced greater social concerns about their sexuality. Furthermore, women who were born illegitimate, poor and multiracial could face additional questions about morality, religious orthodoxy or criminality,” says Leavitt-Alcántara. “Women who did not live with a natural patriarch – a father or husband – might look to form bonds with other patriarchal figures, so what I’m seeing here is that women may have cultivated priests to serve in that role to help them survive socially and appear to be honorable, pious women.”

The wills revealed how single and widowed female benefactors often named priests as beneficiaries of their pious foundations, while at the same time naming those priests as executors of their estates – essentially placing these priests in charge of both spiritual and worldly matters.

Leavitt-Alcántara says that furthermore, “Women were forming relationships with priests who were not their parish priests, even though the Catholic Church envisioned the primary confessional relationship as one between parish priests and parishioners. So, I believe that women did strategize and exercise some choice in forming these relationships. I think this also highlights the competition among priests and monastic orders to form religious affiliations with these women, and it appears women were active participants in this competitive market,” says Leavitt-Alcántara.

“I think that by developing these networks with churches outside their neighborhood or parish, ordinary women helped to create a common urban identity in a region that had strong division in race, ethnicity and class. Religion played a role in connecting the city and these diverse populations.”