A Decade of ‘Delics: Shroom, Ten Years On

[dropcap style=”font-size:100px; color:#992211;”]I[/dropcap]
find it hard to believe but it’s exactly ten years since my book Shroom: A Cultural History of the Magic Mushroom was published.

Though the occasional sentence makes me wince, and I blush at the florid dedication to now ex-partner, I remain immensely proud of it. It picked up some great reviews, not least from the New York Times.

Like any book, it has its weaknesses. I was wrong about John Allegro, author of The Sacred Mushroom and the Cross, who argued that Christianity originated in a fly-agaric cult. Taking my lead from a letter by Robert Graves I assumed he was, as Graves put it, “nuts”. He wasn’t, and he genuinely hoped his theory would achieve academic recognition. While that doesn’t affect my conclusion that his theory is wildly implausible, I’m sorry I questioned his sanity.

And my coverage of magic mushrooms in America during the 60s and 70s was too thin. Limited funds meant I didn’t have the resources to travel to meet the movers and shakers from that time, and the social networking revolution which would’ve meant I didn’t have to, only really took off after the book was published. I hope that some later scholar will do them and the period justice.

I’m sure there are others.

I always hoped that the book would have a long shelf-life, and it seems that interest in the book is gaining momentum once again. I would imagine that’s to do with a new generation of psychedelic millennials seeking to know more about the history of their interests and enthusiasms. I still get fan mail… 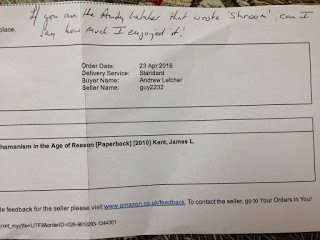 although if you read some of the reviews on Amazon, you’d think I’m the devil incarnate. If one reviewer is to be believed, I saved someone from undergoing unnecessary gender-reassignment surgery (which I think is meant as some kind of satire, though the point of it is lost on me), and most incredibly of all I have been cast – let’s be polite and say by certain ‘conspiracy theorists’ – as virulently anti-psychedelic. This came as quite a shock!

I prefer to let people read between the lines rather than spelling everything out in red letters, but for the record my stance has always been pro the judicious use of psychedelics (and I would have thought that was obvious to anyone who’s actually read the book). However, I’ve never understood why being pro-psychedelics requires the abrogation of reason, and if psychedelia truly wants to come in from the cold,

as I believe it must, then it has to subject itself to some critical self-examination.

The desire to see the world as it is and not how we would wish it to be lies as much behind the psychedelic quest as it does the academic project. My hope was that by placing the history of the magic mushroom on firmer foundations, it would grant the subject more, not less, credibility, at least in the eyes of those with the actual power to change things. The fact that psychedelic studies seems to be returning inexorably to the academy suggests there are many others who agree.

So, yes, Shroom is an academic book masquerading as a popular read but it’s certainly not a work of scientism, attempting to pour scorn on the wilder imaginings of the psilocybin flash. After all, it’s the refusal of the trip ever to accept closure of meaning that makes it so damned interesting.
Fans of the book may like to know that I am writing again on the subject of magic mushrooms, as I always intended to do, only this time in a more writerly and autobiographical way, and without recourse to the footnote. Shroom took two years to research and write, working full time. Now that I can only snatch an hour or so here and there, this next book may take a little longer, so watch this space.

But in the meantime, I’d like to thank all those of you that bought the book and the many who’ve written to me to say how much they enjoyed it.

And if you haven’t read it yet, why not treat yourself to a copy?

Next Story:
Is the US A New Weimar? If So, The Democrats Made It