Shamanism has a place in the arts and famously Joseph Beuys pioneered this, but what is shamanism and what’s it for?

[dropcap style=”font-size:100px;color:#992211;”]T[/dropcap]he word Shaman is said to have first been used by Russians engaging with the indigenous peoples of Siberia who have a long tradition of shamanic ritual. The term has come to be used to describe ritualistic practices which are enacted or directed by a key figure ‘a shaman’ that this term is used by anthropologists instead of priest or some other term for such a person may be a sign of a kind of projection onto ‘others’ this is still the cause of debate and the etymology of the term is contested by historians and academics.

In modern English though there does seem to be a place for the term shaman since it separates formal religious activity perhaps like that present in Catholicism, Judaism or Islam which is often directed at the importance of the next world and has become attached inexorably to huge institutional power and instead describes an agent who is concerned with the moment, and with material reality, a shaman is a person who is seen to have demonstrated a link with the spirit world and through trance, religious rites and various altered states attempts to act as a catalyst for transformation, change or healing in the everyday. 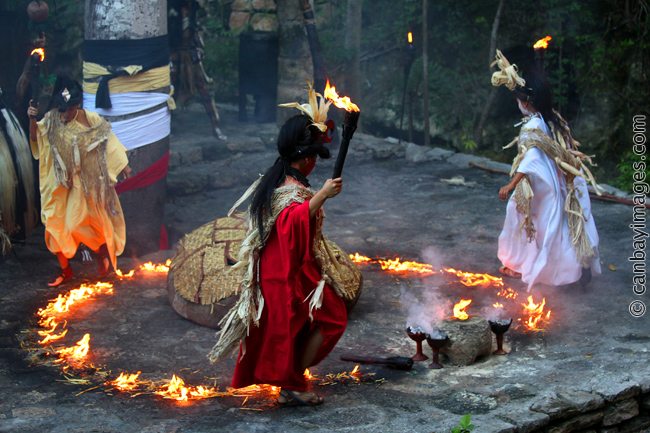 The spirit world which is described as being inhabited by benign and malignant spirits seems farfetched and yet we might simply see this as one way of understanding the forces and symbols which exert force on us in reality and which confound conventional expression, a shamanistic ritual in that sense may be akin to western ‘talking cures’ which include the necessity of an authority figure who is ‘supposed to know’ and directs activities.

Psychoanalysis for example concentrates on symbols and even delves into a dream world albeit from a more Eurocentric position we might also see artists as figures who delve into a world of symbols and attempt to transform these through shifts in perspective through appropriation and subversion of their subject matter this association is strengthened by the fact that many artists see themselves as direct inheritors of this tradition.

In shamanism there is a focus on the natural world and on animals this also separates shamanism from the Abrahamic religions and perhaps is more akin to Shintoism and Buddhism, while the Asian connection is undeniable it is an interesting and universal practice with shamanic rites and the shaman being a feature of every continent and including places as diverse as Siberia to Australia and including north and south America.

The transformative and healing potential of these rites and the potential for re-thinking make shamanism a compelling influence for creatives interested in exploring the limits and norms of their society.

Beuys is said to be one of the most influential artists of the 20th century he was inspired by a wide range of theories including the notion of the ‘Gesamtkunswerk’ a German term which translates as “total work of art” the term as become familiar in aesthetics and is often associated with utopian ideals, it refers to the combination of art disciplines to produce a ‘total’ or ideal artwork which works on many levels and unites the qualities of various otherwise separate art forms for the benefit of the audience and the broader society. Beuys was also interested in Anthroposophy itself sharing qualities with shamanic practices. 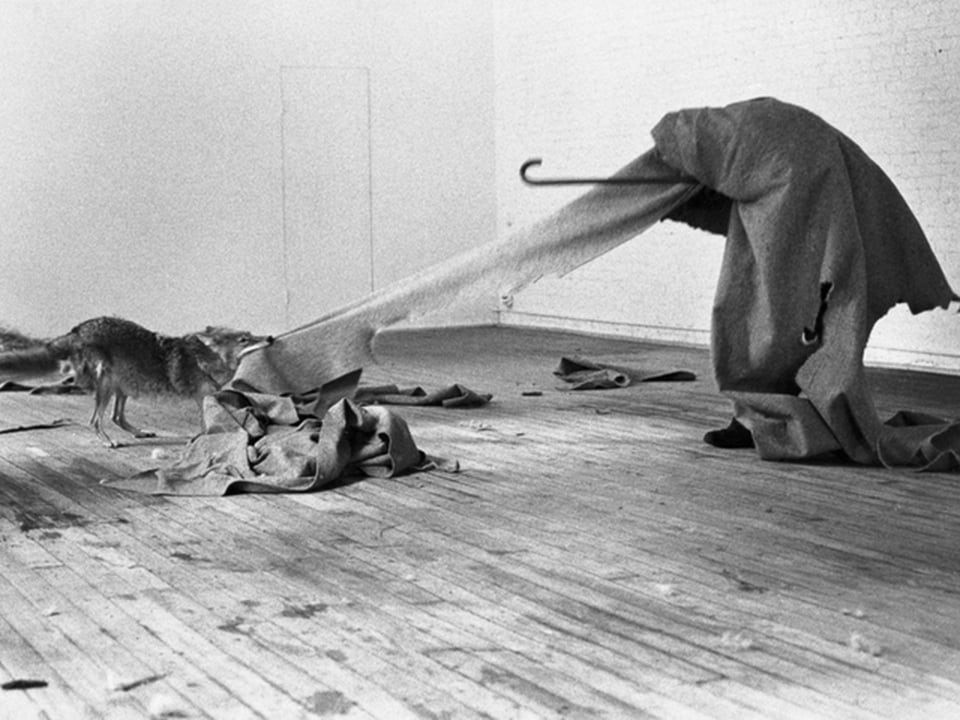 In 1974, Beuys spent three days in a room with a wild coyote for his performance, I Like America and America Likes Me. (YouTube Still)

“Anthroposophy is a philosophy founded by Rudolf Steiner that postulates the existence of an objective, intellectually comprehensible spiritual world that is accessible by direct experience through inner development. More specifically, it aims to develop faculties of perceptive imagination, inspiration and intuition through the cultivation of a form of thinking independent of sensory experience,’”Robert McDermott, The Essential Steiner

As such Beuys both directly drew on shamanic practices as a way to develop his art practice through performance and lived authentically as a type of modern day shaman making appearances in a wide range of public debates supporting radical and progressive ideas. His interest in the expanded field of art and his conviction that art had a role in reforming and shaping society through creative practice became core to his art practice and life which became increasingly inseparable,

“Beuys had adopted shamanism not only as his presentation mode of his art but also in his own life. Although the artist as a shaman has been a trend in modern art (Picasso, Gauguin), Beuys is unusual in that respect as he integrated “his art and his life into the shaman role,”Ulmer, Gregory (1985). Applied Grammatology.

Beuys was concerned about the limits of so called rational thinking to stultify societies and prevent creative solutions to problems, he saw the role of the shaman-artist as one who interrupts this and opens the space for repressed ideas or unthinkable or side-lined ideas to be brought into public debate. Beuys also emphasised the healing quality of the artist and saw his performance and practice in general as an attempt not only to illuminate but to change and remodel,

The quote above attests to his belief in challenging deterministic thinking by evoking atavistic and fundamental human quality to create meaning and will it into being this has meant that Beuys himself is synonymous with authenticity in art and he has become a mythic figure within the art world and in pop culture.

Beuys brought ritual, tribalism and inter personal improvement into the art world at a time when science and scientific thinking was coming to dominate public discourse. Beuys combined personal symbolism with more universal ideas, his performance with the dead hare was both surreally absurd and strangely moving, in his own words,

‘In putting honey on my head I am clearly doing something that has to do with thinking. Human ability is not to produce honey, but to think, to produce ideas. In this way the deathlike character of thinking becomes lifelike again. For honey is undoubtedly a living substance. Human thinking can be lively too. But it can also be intellectualized to a deadly degree, and remain dead, and express its deadliness in, say, the political or pedagogic fields’ Beuys

1: The Tungusic term was subsequently adopted by Russians interacting with the indigenous peoples in Siberia. It is found in the memoirs of the exiled Russian churchman Avvakum. Written before 1676, first printed in 1861; see Hutton 2001. p. vii.
2: Adam Brand, Driejaarige Reize naar China, Amsterdam 1698; transl. A Journal of an Ambassy, London 1698; see Laufer B., “Origin of the Word Shaman,” American Anthropologist, 19 (1917): 361–71 and Bremmer J., “Travelling souls? Greek shamanism reconsidered”, in Bremmer J.N. (ed.), The Rise and Fall of the Afterlife, London: Routledge, 2002, pp. 7–40.

Next Story:
Understanding The Modern, it happened in the past!