An international team of scientists has discovered a new, massive star system, that also challenges existing theories on how large stars eventually die. 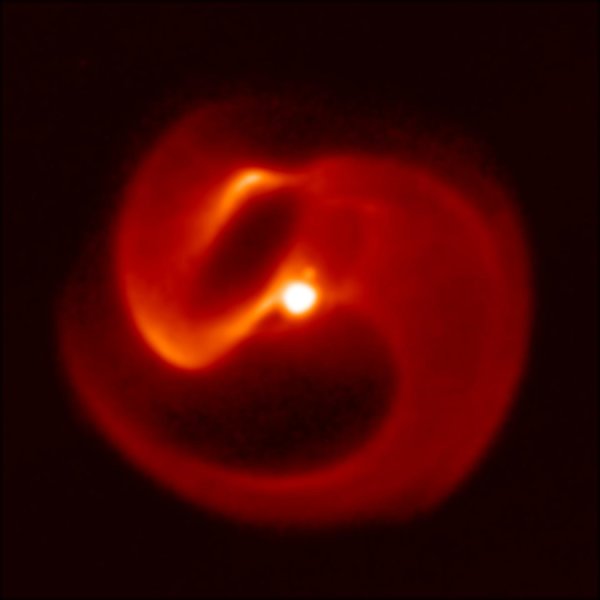 [dropcap style=”font-size:100px;color:#992211;”]A[/dropcap]n international team of scientists has discovered a new, massive star system—one that also challenges existing theories on how large stars eventually die. Specifically, the scientists detected a gamma-ray burst progenitor system: a type of supernova that blasts out an extremely powerful and narrow jet of plasma and which is thought to occur only in distant galaxies.

“This system is likely the first of its kind ever discovered in our own galaxy,” says Benjamin Pope, a NASA Sagan fellow at New York University’s Center for Cosmology and Particle Physics and one of the researchers. “It was not expected such a system would be found in our galaxy, only in younger galaxies much further away. Given its brightness, it is surprising it was not discovered a lot sooner.”

The system, an estimated 8,000 light years away Earth, is adorned with a dust ‘pinwheel’,  the strangely slow motion of which suggests current theories on star deaths may be incomplete. When the most massive stars in our universe near the end of their lives, they produce fast winds typically moving at more than 1,000 kilometres per second, that carry away large amounts of a star’s mass. These winds should carry away the star’s rotational energy and slow it down long before it dies.

“These massive stars are often found with a partner, in which the fast winds from the dying star can collide with its companion to produce a shock that emits at X-ray and radio frequencies and produces exotic dust patterns,” explains Joseph Callingham, a postdoctoral fellow at the Netherlands Institute for Radio Astronomy and lead author of the paper. “Apep’s dust pinwheel moves much slower than the wind in the system. One way this can occur is if one of the massive stars is rotating so quickly that it is nearly tearing itself apart. Such a rotation means that when it runs out of fuel and begins to explode as a supernova, it will collapse at the poles before the equator, producing a gamma-ray burst.”