In the same day’s post arrives albums from Aimee Mann and Redrails. The latter bears a postmark hailing from Kanagawa, Japan, and has crossed the Pacific unscathed and in advance of its September 17th release date.

Keep that date in mind, it is a nodal point in the release schedule of record labels from Manchester to, well, Kanagawa. Not quite as important as the pre-summer glut that clusters around the third week in May, or the almighty cardinal date that is the third Monday of November, but a focal point of music marketing departments and distribution companies nonetheless. A point which corresponds with the last gasp of festival season (Bestival, traditionally, but now extending to upstart summer-extender hopefuls in Croatia and Morocco).

‘It’s not the end of the world

In fact it’s not even the end of the summer’ – Bowling for Soup, A Hangover You Don’t Deserve

Alas, on this occasion, it is.

By now it is to be presumed that russett-toned wooly jumpers are being pulled on, wistful memories are being wistfully remembered and, in the priorities of the record-buying public, the search for a country pub with an open fire has usurped the hunt for a really decent primary school for Toby and Ella.

In adland iconography, crisp banks of deciduous leaves (sans soggy mulch and covert dogshit) are being kicked, cold hands are being warmed on mugs of (Product X), and rosy-cheeked faces are being bared to the crisp winds of days that are nippy but suspiciously clear.

‘It’s jumping cold, Ivor, but bright as a new pin’ – Jones the Steam, Ivor the Engine, Episode One

All this needs a soundtrack. And possibly wooly tights. Aimee Mann’s forgettable album Charmer grasps onto the fading light and turning-leaf melancholy of Autumn with a deathgrip that is about the only manifestation of vigour about the thing. A roaring success story in the narrative that is Music 2.0, Mann has famously wrested her career free from the artistic and monetary interventionism of major label economics, ditching the advice of the man who brought the world Joni Mitchell and Carly Simon, to go it alone and express herself, yeah?

Except that despite doing so, she has latterly created an album that delivers the sort of safe AOR schlock that even the most cloth-eared of music biz focus groups would consider a touch on the cynically crowd-pleasing side.

Redrails’ eponymous album though, Redrails, offers very little that is familiar or crowdpleasing. It displays an artistic sensibility that is the other side of the Music 2.0 coin – the side that we were all told to expect when musicians whose music had no natural home (in an industry dedicated to shifting units) were presented with the means to make, record, and distribute their music themselves. Although the comparison in this case is a touch laboured – the band has label support in Murmur Records.

It opens boldly: scratchy violin lines steadfastly refusing to consolidate into recognisable, predictable melody, underpinned by an unsettled, high-treble percussion. Disconcerting and unpredictable, the track ‘Avant la guerre’ has a tension to match its name, impressive in such a spare production.

But an album’s worth of challenge and effrontery would not be interesting – where ‘Avant la guerre’ strives for aural shock – playing a game of thwarted expectation with random, discordant notes following one another that might be likened to Ligeti, (or just as appropriately compared to Les Dawson‘s comedic use of the same technique, there is a strong undercurrent of sly humour to the album) – ‘La Fievre’ which follows it, offers a calm, harmonic emotion-settler.

Violin is bowed simply in a reasonably straightforward progression of notes, with some squirelly effects running beneath the melodic line bringing a touch of activity to the track. It’s a set-up, a bridge in the album akin to a palette-cleansing swig of mineral water between courses on a tasting menu. On Redrails, the dynamic is played out over the length of the disc. Tension – release – tension.

Nothing particularly new there then, and in fact, there is a lot of the album which reminds of Kid Koala‘s Space Cadet, only in Redrails’ case the main instrument carrying the melody is violin not piano, and the earcatching details shivering in and out of the soundfield are created by (the sleevenotes inform) ‘Computer’ and ‘Effects/Sampling’, not vinyl scratching (as in Kid Koala’s case).

But even if the idea of a fifty-four minute musical journey tweaking various emotions in the listener is hardly revolutionary, it’s done so here in an overt manner, without the complications of vocals or lyrics bringing the subjective nature of verbal communication into the mix.

‘Caresses Derailles’ ups the tempo, dropping dance music beats into a violin reel, before it segues into the trippy, busy mosaic of electronic percussion, effects and looping rhythms that is ‘Maman’. Violin only ghosts the lower reaches of the latter track for most of its length and, if anything, ‘Maman’ owes much to Orbital.

The album begs the listener to submerge into it though, creating all those emotionally panoramic, cinematic, psychological moments that are the hallmark of a great record. As soon as it lulls the ear with the gypsy-inflected Bolero that is ‘La chat sur la fenetre’, the psycological thriller-atonal-industrial, almost be-bop arabesques of ‘Scotch’ take over.

Occasionally the conceit is just a little overstretched. ‘Strike’ consists almost entirely of clicks, whirrs and bleeps for its opening minutes, suggesting the concept of passing time, entropy and ageing before it, happily, develops into a compelling interplay between an increasingly active violin line and a softly pulsating series of melodic rhythms from the electronics department.

The same disjointed dichotomy is brought to an extreme point in final track, ‘Zerkula’, where the opening bare violin solo is separated from the remainder of the track’s twelve minutes by an extended section of silence. When the song restarts, it is with sampled snatches of speech, in three different languages (French, Japanese and Hungarian, at a guess), sequenced together in ever-decreasing, ever more-processed intervals, punctuating a violin line which wavers between Eastern European melodies (again, Ligeti springs to mind), and something more suggestive of east-Asian influence. 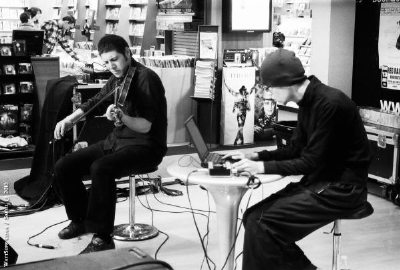