Slim Shadysaurus: What We’ve Learned From the Patterns on a Psittacosaurus

What dinosaurs’ color patterns say about their lives

That’s enough data to allow researchers to infer all sorts of habitational and behavioural characteristics about the plucky little psittacosaurus, and enough to allow the more cynical of us to wonder how long before it provides one of Shanghai’s new megarichies with the makings of a particularly exclusive new handbag.

After reconstructing the color patterns of a well-preserved dinosaur from China, researchers have found that the long-lost species called Psittacosaurus (meaning “parrot lizard,” a reference to its parrot-like beak) was light on its underside and darker on top. This color pattern, known as countershading, is a common form of camouflage in modern animals.

The findings reported in the Cell Press journal Current Biology lead the researchers to conclude that Psittacosaurus most likely lived in an environment with diffuse light, such as in a forest.

“The fossil preserves clear countershading, which has been shown to function by counter-illuminating shadows on a body, thus making an animal appear optically flat to the eye of the beholder,” says Jakob Vinther of the University of Bristol, United Kingdom.

“By reconstructing a life-size 3D model, we were able to not only see how the patterns of shading changed over the body, but also that it matched the sort of camouflage which would work best in a forested environment,” adds Innes Cuthill, also of the University of Bristol.

Countershading most likely served to protect Psittacosaurus against predators that use patterns of shadow on an object to determine shape, just as humans do.

As a graduate student at Yale, Vinther realized that structures previously thought to be artifacts or dead bacteria in fossilized feathers were actually “melanosomes,” small structures that carry melanin pigments found in the feathers and skin of many animals.

In some well-preserved specimens, such as the Psittacosaurus the researchers worked on in the new study, it’s possible to make out the patterns of preserved melanin without the aid of a microscope. Innes and colleagues at Bristol had also been exploring the distribution of countershading in modern animals. But it was no easy matter to apply the same principles to an extinct animal that had been crushed flat and fossilized.

The researchers teamed up with paleoartist Bob Nicholls to produce what they say is the most scientifically accurate, life-size model made of a dinosaur with its real color patterns. They compared the dinosaur’s color patterns to the predicted optimal countershading from the measured radiance patterns generated on an identical uniform gray model in direct versus diffuse illumination. Those studies suggest that Psittacosaurus sp. inhabited a closed habitat such as a forest with a relatively dense canopy, they report. 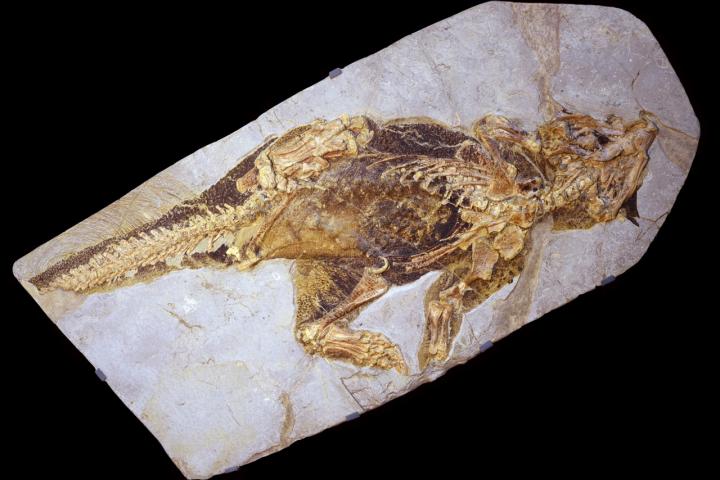 “We were amazed to see how well these color patterns actually worked to camouflage this little dinosaur,” Vinther says.

Psittacosaurus, which Cuthill describes as “both weird and cute, with horns on either side of its head and long bristles on its tail” lived in the early Cretaceous of China and has been found in the same rock strata where many feathered dinosaurs have been found. Those deposits also include evidence for a forest environment based on plant and wood fossils. But, Vinther says, closely related species lived in Mongolia in an environment that would have resembled a savannah with much less vegetation and so, the researchers predict, would have had different camouflage patterns.

The researchers say that they’d now like to explore other types of camouflage in fossils and to use this evidence in understanding “how predators could perceive the environment and to understand their role in shaping evolution and biodiversity.”

Next Story:
Loitered Lens: Peter Hook and the Light