Proving life on a thermal level 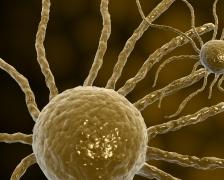 Can we test Justin Bieber? I believe he might have become immortal… but at the cost of his very soul.

To the ancients, probing the philosophical question of how to distinguish the living from the dead centered on the “mystery of the vital heat.” To modern microbiology, this question was always less mysterious than it was annoying — researchers have known that biological processes should produce thermal signatures, even within single cells, but nobody ever knew how to measure them.

Now, a group of mechanical engineers from Pohang University of Science and Technology in Korea have discovered a way to measure the “thermal conductivity” of three types of cells taken from human and rat tissues and placed in individual micro-wells. They showed that they could detect uniform heat signatures from the various cells and measured significant difference between dead and living ones, suggesting a new way to probe cells for biological activity.

A lone cell is fantastically small, often only about 10 microns across (10 millionths of a meter), and this size has thwarted thermodynamic measurements of single cells. Writing in the journal Applied Physics Letters, a team led by Dongsik Kim and Jaesung Park describes how their novel nanoscale biosensing technique can measure the thermal conductivity of a single cell.

“In the short-term, this biosensing technique can be used to measure cell viability,” said Kim. “In the long-term, we hope to refine it to develop a non-invasive, rapid means for early diagnosis of diseases such as cancer based on differences in the thermal properties of cells.”

While the fundamental heat signatures the researchers detected are not exactly what the ancient philosophers imagined, measuring them may answer more mysteries than they could have dreamed.