There Has Possibly Been An Incident [Theatre]

It’s slightly pretentious. And it will frustrate you. But mostly with how close to brilliant it gets.

It is. It’s slightly pretentious. And it will frustrate you. But mostly with how close to brilliant it gets.

Soho Theatre. Tuesday night. What am I expecting from Sam Pritchard‘s There Has Possibly Been An Incident?
In truth, I know very little about the production before I go in. I knew it had a moderately successful run at the Edinburgh Fringe, and was at Latitude earlier this year. I knew the director had won the 2012 James Menzies-Kitchin Young Director Award. I knew it was very much experimental theatre – avant-garde. This is what I was expecting – and I knew it to be primarily centred around monologues. Monologues which may or may not be about tragedies and massacres in the 20th and 21st century. 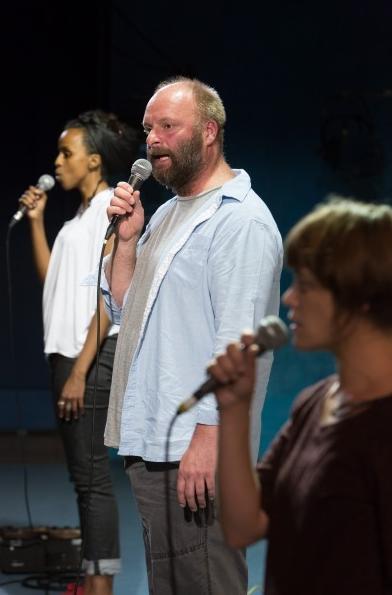 The stands pound with loud music, which break punctually into silence and to three illuminated actors on a stage. They begin reading, from sheets on their lap, in a determined sequence. They begin telling three discrete narratives. Pages of the script start to litter the floor.

The most noticeable thing about the production is the writing. It’s almost the only thing you’re left with. There is a reason for that.

Before you even notice the writing (it is self-consciously writerly, and extremely wrought) you notice something else. How the actors are dressed. They’re dressed casually. They may even be intentionally scruffy.

There is a powerful disjunct between who we see on stage – actors who are conspicuously actors – and who they describe being. But as the hour goes on, our monologuists disappear; they are enveloped by their characters. No one more so than Gemma Brockis, who perhaps has the most lines, and whose part soars in delicate cadence from the pages on her lap and into being on the stage. As Brockis sits and reads, her character walks the stage, owns the space. Brockis herself all but vanishes, as for the most part so do her co-stars Nigel Barrett and Yursa Warsama.

Pritchard has done something impressive here. He has picked up on a theme from the Chris Thorpe’s script – the expansiveness of inner time, how moments spill out endlessly when subjected to scrutinous recollection – and has married this to its visual counterpart: the expansiveness of theatre itself, the transfiguring power of a stoked imagination. In Shakespeare’s Henry V, the Chorus implores the audience to imagine for themselves the spectacle of war on a bare stage. Here, an unironed shirt stands in for poetry, but makes a similar demand of viewers.

[quote]There is a marked switch

from a delighted play

with language to an

by a Very Bad Man[/quote]

I’ve said this is impressive, and I mean it, it is. But let’s be clear on what I mean. It is most successful in terms of how these ideas complement one another. A spotlight comes down on our actors, and as they tell us their stories, a pinprick of light illuminates some distant event in our minds, which gradually expands to encompass the intricacies of pressured thought; contradictions of feeling; motivations which inform the slightest movements, the largest of political acts. This builds into a glaring floodlight over tragedy, one which centres its audience not so much in empathy for victims of these events but for onlookers, our narrators, who have decided to share with us the horror of bearing witness, the burden of proximity.

Yes, but what it is about, Liam? Well, I’m glad you asked. Brockis narrates what appears to be the Chinese Revolution, and tells how happenstance gave way to momentary conviction, conviction to idealism, idealism to vanity and, eventually, moral compromise and what went down at Tiananmen Square. Warsama plays an immigrant, travelling to a foreign country to see a lover, recalling in excruciating detail the flight of her plane and the flight of thoughts through her head, pangs of realisation and later, the weight of rapid decision-making. 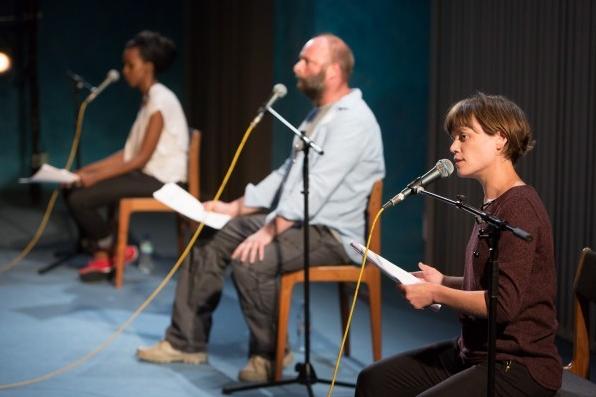 Barrett, on the other hand, is a civilian onlooker to the famous but unidentified Tank Man, who held two shopping bags as he approached the tanks at Tiananmen Square. He wrestles with understanding that man’s thoughts – ‘the man in the white shirt’.

As I’ve said, Thorpe’s script is wrought. In fact, it is extremely wrought, but to its credit only infrequently do you detect howlers of the sort which exclaim ‘over-written’. Mostly it makes sense. After all, his narrators pore over the minutiae of thought, of unthought, even describing and reflecting on data processing in the unconscious mind. Perhaps dyed in hindsight, their stories convince you of something alien in the air: a kind of charge in the atmosphere; an awareness of History unfolding; the zeitgeist; crowds which beat with one heart, which behave like single organisms.

Something might be lost on the stage, however. Reading Thorpe’s script afterwards, I notice how much less hokey and awkward some of the lines read in print: “He looks straight at me. He’s speaking without speaking. Without moving.” Barrett’s parts may be the most affected by this; it’s hard to say if it’s him, or just the lines he’s landed with. He does, after all, get many of the jokes, many of which are funnier in print, too: “You can hide more guns under a Burqa. As clothing for terrorism, it’s very practical.” 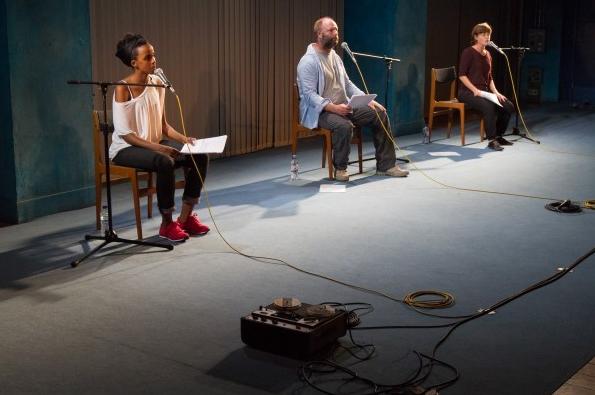 Whatever the reason, it’s testament to the writing that it makes good ‘closet drama’. You can read it with the same appreciation you give an awkward sentence in later American fiction; there are strains of DeLillo through the whole thing, and God knows he doesn’t adapt well to screen. You can read it in its perfect voice(s).

Pritchard circumvents the obvious difficulties in such a play by being as ‘unstagey’ as possible; for this reason, blank canvasses are preferable, hence the dressed-down actors.

But when they switch to the fourth narrative strand of the play, in which Barrett plays Anders Breivik on trial and the two women portray prosecutors, the spatial dimensions of the stage begin to reassert themselves. You need a minute to get back into the story. Brockis and Wursama are both fantastic readers, but don’t sound enough like different characters in these scenes. You’re reminded of watching a play. Hmm. Stagey.

The Breivik scenes are Thorpe’s weakest as much as they are Pritchard’s. This I can say without reservation. There is a marked switch from a delighted play with language to an attempt at wry social commentary, delivered by a Very Bad Man, which doesn’t totally work. It’s meant to be the thematic heart of the play, a comment on the The Difficulty of Moral Choice, something about the necessities of humanistic empathy.

The problem is partially about transitions; the way these scenes punctuate the play. Certain lines are delivered with such gravity and portentousness that the play seems to rattle afterwards with awkwardness and discomfort.

The failure.
– But of what?
The project.
– What project?
The European project.

It’s a DUM DUM DUM moment, when the audience is expected to register ‘Oh, it’s Anders Behring Breivik or someone like him.’ It unfortunately has a Dramatic Chipmunk quality to it. There are a few other such inauspicious segues, as well, but thankfully not many.

Moments like this actually weaken the whole play for me; they draw attention to the writer at his desk, feeling clever. As does the scene where the Brockis’ character reflects on revolutionaries-as-poets. “Why is it such a ridiculous idea to structure a country the way you’d write a poem?” This question is lampshaded; the character knows it is an absurdity, but all the same Thorpe implements it as a comment on the play as a whole, which can very much be said to be aspire to being poetic. Often however, it comes across novelistic; it is a play structured “the way you’d write a poem,” reliant almost entirely on the prosody of an American novel.

The most effective moment comes right near the end, when each story has just about finished – or at least, you think, reached some kind of natural pause – and your watch says this is probably the end. The play reaches its Waltz with Bashir moment where we know enough that we allow the play to wash over us, and Feel Something. At this point you feel moved to clap, but there’s a bit more: more of the boring Breivik bits.

It ends with all three performers reading in unison, telling another (a moving, and well-written) account of a hero – not a witness, but a doer! – on Utoya Island that fateful day. We are being prepared for something. A big feeling. The play is amping up. It wants to recreate a feeling… the feeling from just before.

But by now they’ve missed it. It’s too late. That perfect ending slipped has through its fingers. The play’s fingers. You know.

Like a thought in a metaphor that only just about works, yeah?

At Soho Theatre until October 5th