Anne Pigalle, the last Chanteuse, returns to old Soho with a series of live performances. 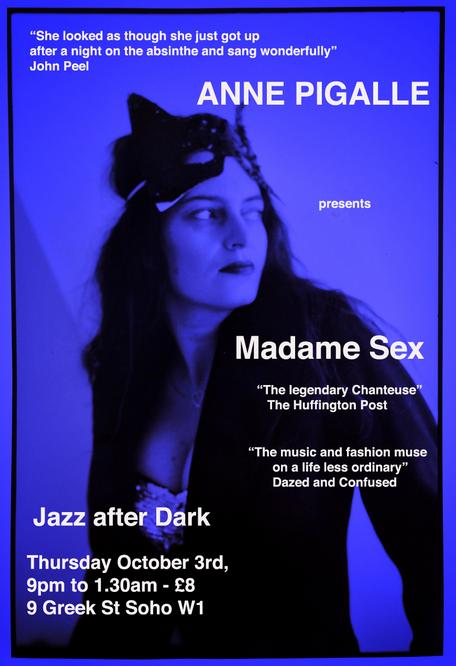 Madame Sex is the new release art CD from Anne Pigalle. Anne Pigalle, the last Chanteuse, is taking over old Soho with a series of live performances. She was the first musical act to perfom at Madame Jojo’s way back when, and also revamped the Café de Paris when the Café was still a thé de dance venue.

Anne came up with a proposal that the manager could not refuse and he let her have the place. The rest is history : Les Nuits du Mercredi at the Café de Paris in London are legendary for a certain generation as the most fun nights ever in London. Now Anne Pigalle comes back to her roots: the first evening will be on October 3rd at Jazz After Dark (a venue known for hosting Pete Doherty and Amy Winehouse), 9 Greek Street Soho W1 – from 9pm to 1.30am.

Well, according to Madame Sex, and she knows.

Next Story:
There Has Possibly Been An Incident [Theatre]