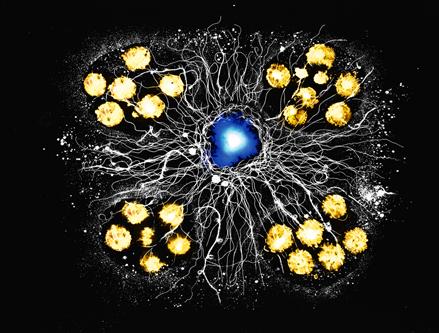 The science of art and the art of science

GV art is a contemporary gallery that explores and acknowledges the inter-relationship between art and science. I popped along to explore the current exhibition, ‘Polymath’.

As I approached the gallery, I was immediately captivated by a sculptural artwork in the window with glacier-like qualities. Possessing a sense of immense energy captured within the artwork, ‘Nebular’ by Katharine Dowson is a block of clear acrylic which has been molten. It encases light reactive prescription lenses, creating a bubbled effect reminiscent of cells or seeds.

Hollows and fractures appear within the transparent mass and a fragile flicker of elliptical shadows move around the piece throughout the day, becoming more intense as sunlight hits and the lenses darken.

The polymath is almost a discipline in itself

GV Art’s latest exhibition brings together ‘polymath’ works that create synergies and connect disparate ideas and different schools of thoughts. From David Marron’s ‘Nervous Tissue’ installation, to Susan Aldworth’s ‘Reassembling the Self lithographs’, to Rachel Gadsden, whose Unlimited Global Alchemy will be presented as part of the 2012 Cultural Olympiad. I wanted to know how GV Art defines a polymath and if these artworks are really pushing boundaries between disciplines as they claim to.

Defined as a person of great learning across several fields, a polymath “doesn’t look at what is there but uses existing knowledge to create something new and dynamic” observes co-curator Dr Jonathan Hutt. “The polymath is almost a discipline in itself”, explains artist David Marron. “It aids a sensibility in attaining a reasoned level of thought.”

Curator and director Robert Devcic explained to me that the gallery does not exist to assemble research or illustrate science, it’s a much more magical and two way process than that. He gestured towards Helen Pynor’s milk series of photography (below) for which she worked with aboriginal elders to explore and document the medical properties of the healing methods and recipes passed down from the ancestors.

The resulting body of work is a delicate and sensuous series of images exploring the human body as a culturally-constructed entity. Plants such as wattle, banksia and paper bark are photographed drifting in the swirls of a milky liquid against a deep turquoise background that evokes a vast ocean or a tranquil pool. Eddies of milk float and coil into this pool – as do strings of text and fragments of writing which reveal the medicinal use of the herb. This series is complimented by a similar grouping of photographed floating organs such as a heart, lungs and bowel – a fluid, beautiful, suspended exploration of the visceral.

I discovered that GV Art works with artists who collaborate with scientists, or artists from a scientific background who use the arts as a way to explore their interests in science. It is clear that this is not just a clever title, the artists are truly of polymath status – having multiple degrees and doctorates across academic, scientific, medical, philosophical and artistic fields. They are seeking to push boundaries through art, asking questions as an artist that they may not ask as a scientist, whilst forging new processes and ways of looking.

As the only private gallery in the UK to hold a human tissue authority license, GV Art has in the past been amidst controversy for showcasing slices of human brain, but director Devcic is quick to explain that the shows are not about shock or gore in any way, they are to help us visualize and confront our own composition, to explore the fragility of the human condition, and also to help nurture and sustain the practices of artists working across the fields of art and science.

As I travel around the space, Devcic reveals the depth of research and background behind each artwork. The artist Susan Aldworth weaves together personal, medical and scientific narratives in her experimental print works on human identity. Polymath features two previously unseen pieces from ‘Reassembling the Self’, her new suite of lithographs.

This latest series was made at the Curwen Studio under the guidance of the legendary master printer Stanley Jones. She worked on a collaborative project with patients and scientists to piece together some of the narratives that inform the diagnosis and experiences of schizophrenia.

Aldworth also exhibits two lenticular works in Polymath – fascinating, richly coloured micro images of organic structures, which are composed of many layers of images printed along tiny ridges, or lens, resulting in a surface that changes and moves as the viewer does. (pictured above). As I walk past them they shimmer and spark as neurons appear to fire.

Nina Sellars is an artist who as a girl had to have part of her skull removed, losing her sight for one and a half years.

Her pencil drawing ‘Stelarc’ delicately merges and then unravels the internal and external views of a face, a skull, a spine. In the past she has worked with scans of slices of skull.

Andrew Carnie studied both chemistry and painting. His work involves a meaningful interaction with scientists is often time-based in nature, involving 35 mm slide projection using dissolve systems or video projection onto complex screen configurations. Stills from ‘Magic Forrest’, a projected artwork, are exhibited in Polymath and seen below. In the original piece, layered images appeared and disappeared on translucent screens, transforming from macro to micro:

Starting with the skull and journeying all the way in to the neurons. The micro mimics the macro – neurological structures appearing like a forest or a river system. The developing display is intended to absorb the viewer into an expanded sense of space and time through the slowly unfolding narratives that evolve before them.

the discourse between organs… a brand new art movement

So is this something unique and new? The answer is yes. This is not ‘Sci-art’, this is boundary-pushing stuff. If you want to see exciting techniques and art that delicately explores the discourse between organs to create objects of stunning beauty, visit the show.

These polymath artists are innovatively fusing art and science to create a brand new art movement inspired by science, visualising the invisible and exploring what it means to be human. As is pointed out to us in the catalogue, polymaths have shaped the evolution of the world throughout history, including Aristotle (384-322BC), Galileo Galilei (1564-1624) and Steve Jobs (1955-2011), with the most famous polymath of all, of course, being Leonardo da Vinci, who personified the concept of ‘Renaissance Humanism’.

Previous Story:
Gilberto Gil, Roots Manuva: Back to Black Festival
Next Story:
Can You Hear This?

One Reply to “Polymath”