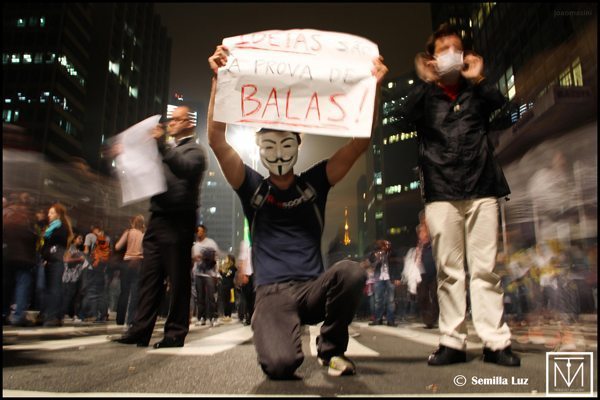 [dropcap style=”font-size:100px; color:#992211;”]T[/dropcap]he current eruption of protest in Brazil has been met by the vigorous scratching of heads, a sound that has become familiar since about 2010. What, on this global earth, is going on?

‘The Arab Spring’ was met with disbelief, confident dismissal, followed by an enormous collective face, volte-ing in search of the mot juste, which – despite a plurality of fallen governments – remains elusive to this day.

More recently Turkey, one of the sub-darlings of the new BRIC world order, endured the humiliation of Erdogan as his ‘moderate’ reputation was scattered by endless baton charges and suffocated with tear gas.

But Brazil? Its president has impeccable, moderate leftist credentials, its economy an apparent  beacon of global growth, and its status as the single football superpower remains unchallenged. The World Cup, a symbolic performance of global recognition is even to be hosted in Brazil, as is the Olympics, both within the next three years.

Yet crisis is upon them and in objecting to both these laurels the protestors are voicing a less typical, yet no less global, type of political assertion.

Each of these protests will have their own explanations, and no doubt there will be both more protests and more explanation, but is there one ring that binds them all? Is there one explanation that unites each instance of protest in opposition to the global Mordor of liberal capitalism? The short answer, I think, is no.

However, that is not to say these protests do not share some important explanatory elements, and IMHO, they can be understood as expressing an evolution in the way politics is conducted, a shift in the ‘technique’ so to speak.

Slowly, but surely, the old ways of doing politics that involved organisation, control of formal institutions and mastery of a vocabulary of power, is ebbing away. In its place we find spontaneity, the bypassing – even the deliberate wrong-footing – of institutions, the substitution of objective comparison and analysis by more subjective, populist, memetic, pop-cultural referencing, competing narratives, and the reframing of political claims in unexpected ways.

Gone are the turgid, structural critiques of yesteryear, here are the assemblages, the collages, the image based appeals to human sympathies.

In order to properly understand this, we need to employ a term first used to describe the journalism of Hunter S. Thomson, and that term is ‘gonzo’.

Some think the word emerged bleary eyed from the cellars of South Boston, used to describe the last man standing after an all night drinking binge, but whatever its origins it came to define a stance, an orientation towards old fashioned practices of journalism.[quote]The protestors, from Tahrir Square

through Gezi Park to the Macarana,

joined hands because they each

wanted something, not because

they all wanted one thing[/quote]

Whereas journalists had once paid due regard to the principle of objectivity and determining the truth behind the known facts, and editors would only publish when the fact-checkers fully supported the story, Thompson popularised a less formal, more subjective style of reporting in which his participation in the events he recorded was central to the story. It was at once more daring, more confrontational, and capable of hinting at deeper truths than was previously the case.

A piece by Hunter S. Thompson would hit a reader in the solar plexus rather than appeal to the affiliated vistas of reason.

Gonzo politics similarly eschews the accepted narratives of the past, dispenses with formal processes and places the subjective experience of personal commitment above that of collective political organisation. Politics is expressed not through votes but through behaviour, and its signature is protest. In the past, protest was linked to specific objectives, plans for government expenditure or restraint, new laws to be passed, or old laws in need of passing.

But today’s gonzo world gives us protest without prospect. An expression of resistance, a public withdrawal of consent, and an appeal for alternatives, but no specific demands beyond refusal, save perhaps discussion.

The first clear instances of gonzo politics could be found in the ‘post-millennial’ space, both conceptually and temporally. The disparate elements of the Anti-Capitalist movement were initially confusing, but paraded as a virtue by those for whom the key feature was opposition over proposition. It was enough to say that ‘another world is possible’ without stipulating exactly what it might look like.

The post-9/11 period, defined by the ‘War on Terror’, brought new oppositions into focus as another caravan of discontents organised under the label ‘Stop the War’, whose emblematic political dis-ownership was expressed by their slogan ‘Not In My Name!’[quote]Those who claim emergency

powers are beholden to those

Over the following years, and to this day, there has been a persistent filament of opposition to the assumption of emergency powers by states – the unconsulted reproaching the unaccountable – which eventually found resonance, if not exact reflection, in Tahrir Square in 2010, kicking off a whole new round of gonzo politics, and taking it worldwide.

These protests, which might be better described as fermentations, provided a template for further protests across the region, most notably in that they revolved around control and occupation of a symbolic public space, but also because they united a coalition of discontents enough to drain whatever remaining legitimacy attached to the old order.

They were not organised around a specific set of demands except for a new regime, which has subsequently emerged in many countries.

The wider impact has been violent revolution followed by Western intervention in Libya, and has now tracked the sands of Syria with blood. In both these cases, a highly differentiated coalition has been the source of much confusion and anxiety abroad, reflected in the uncertainty shown over how, or indeed whether, to intervene, despite a death toll that might be thought to oblige it.

Then, just a few weeks ago, out of the clear, blue, Mediterranean sky, a small protest over a few trees and a park erupted into a crisis in Istanbul; the rest of Turkey followed. Nobody expected it, nobody predicted it, and nobody yet fully understands it. The same diverse coalition of discontents emerged in the symbolic public square, joining battle with teargas bombing shock troops of the new civil order.

In mere days, Erdogan had gone from paragon to pariah, all because of a gonzo protest he does not understand.

In Brazil a relatively small increase in the price of bus fares has brought half the country to boiling point. Once again, the diversity of claims stretch from more money for schools to less money for football, but the insistent demand is to ‘take back the streets’. The government, clamped onto a FIFA timetable, has yet to find a coherent answer, or even a coherent question that they might answer. They are simply locked in a struggle over who will blink first.

This has one of two effects. At the very least, if the protests are large enough, they constitute a challenge to the legitimacy of the government, and if the government is a military dictatorship, then any attempt at a crackdown exposes the hollowness of that power.[quote]It was enough to say that

‘another world is possible’

In the case of Egypt, it was immediately obvious that Mubarak had no power so long as the army would not obey him. In the case of Turkey, Erdogan has the legitimacy of a democratic mandate, but this will last only as long as the electorate do not think he has become overmighty, a question that will now be tested at the next election. In each case the crowd have posed a question concerning the state’s monopoly over emergency powers.

Those who claim emergency powers are beholden to those who create emergencies.

The protestors, from Tahrir Square through Gezi Park to the Macarana, joined hands because they each wanted something, not because they all wanted one thing. The battleground was different in each case but it might as well every park or every square, into which the crowd brought their various grievances, some donning Guy Fawkes masks to become the eponymous anonymous.

And that is the real logic behind gonzo politics. That protest is politics, that coalitions are brought together by opposition and brought to life by contempt.

Gonzo is not a collection of explicit demands so much as atmosphere, a spirit of political opposition, and it is everywhere. The only really important question is, where next?

Perhaps the most eloquent moment of all the recent protests came when the Turkish crowds had finally been dispersed, taking with them Erdogan’s international reputation.

After all this, after the smoke, after the violence, after the suppression and the new resentments left behind, after the whole whirling conflagration of celebration, confrontation and excess that served as the wake for Erdogan’s moderation, there was at the end of it all, a man, alone, standing.

Next Story:
Coenzyme Q10 is really good for you.