Penguins forage in groups, may synchronize their underwater movements, and potentially cooperate 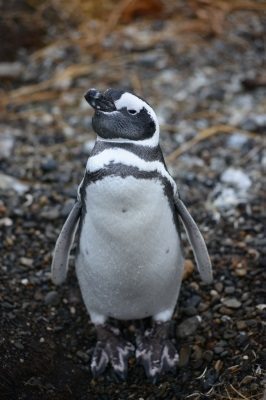 Hard to catch fish when you’ve got a fixed grin glazed to your face, surely?

Most little penguins may search for food in groups, and even synchronize their movements during foraging trips, according to a study published August 13, 2014 in the open-access journal PLOS ONE by Maud Berlincourt and John Arnould from Deakin University in Australia.

Little penguins are the smallest penguin species and they live exclusively in southern Australia, New Zealand, and the Chatham Islands, but spend most of their lives at sea in search of food.

Not much is known about group foraging behavior in seabirds due to the difficulty in observing their remote feeding grounds. Scientists aiming to better understand this behavior used GPS-derived location and diving data to track at-sea foraging associations of little penguins during breeding season.

Researchers gathered 84 separate foraging tracks and then categorized individual penguin associations into one of three groups: not associating with other penguins; associating when departing from or returning to the colony; or at sea when traveling or diving, including synchronized dives.

The authors found that ~ 70% of little penguins’ foraging tracks were in association with other penguins, ~ 50% of individuals dove while associating with other penguins, and ~ 40% exhibited synchronous diving. These behaviors suggest little penguins forage in groups, may synchronize their underwater movements, and potentially cooperate to concentrate their small-schooling prey.