There’s little to prepare you for paying for a drink and getting your change in three different currencies. 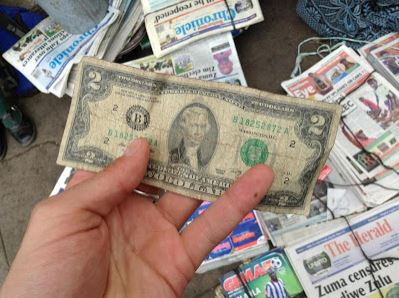 Of course it was illegal, and the state railed against it while many of its highest placed officials profited from the economic chaos, using their influence to game the fixed rate versus that of the black market. Ultimately, however, hyperinflation forced the government to ditch the Zimbabwean dollar and welcome the US dollar as the new basis for the economy.

This leads to some pretty interesting exchanges in shops and on street corners.

Nope, only this and a twenty.

“Okayyy…I just need to find change. What coins do you have?”

“That’s fine. It’s better to have change anyway. Thank you!”

It’s then necessary to spend about two hours wandering around looking for change. The banks don’t want to give their limited smaller bills away. Neither does Western Union. Street vendors just laugh when you ask if they can break a bill, and the various shops around town just send you down the street in a never-ending game of cat and mouse.

If you ever can find some change, you’re presented with a series of bills in a degree of usability that decreases with the denomination: crisp $100 bills, slightly ruffled fifties, still usable twenties, grimy tens, and fivers that are worn, dirty, and tattered.

And dollar bills? Well, alright, have you ever been to a smoker’s house, and I mean a smoker who’s smoked for the better part of six decades, not a stressed out master’s student who is, at this point, surviving solely on coffee and cigarettes. I mean someone like, say, your great aunt. Okay, so you know how your great aunt has that couch that’s been around for years and is probably stuffed with asbestos? It has to be stuffed with asbestos. There’s literally no other way to explain the multitude of cigarette burns that have yet to burn the house down.

Okay, so you’re a kid, and your and has this couch, and it’s dirty. Besides getting a contact buzz from the nicotine embedded in the fabric of the thing, it’s never been cleaned, and your great aunt’s seven cats have shed and yakked and and loved and lived and probably died all over this couch for fourteen years, each. And your great aunt has sat with her TV dinners and cigarettes watching Jeopardy since whatshisname hosted, that guy before Trebek. Merv Griffith.[quote]Can you even name who’s on the $2 bill?[/quote]

Ya, and you’re a kid, and you’re bored, and you’re digging your hand in the cushions of the couch because you don’t understand germ theory nor do you care about personal hygiene (a quality that some of us maintain long into adulthood). And there, between the metal frame of the pull-out bed that your cousin Gary had to sleep on for three years after his wife left him, is a snag of paper. And you pull, and squirm, and you finally manage to reclaim a dollar bill that was long ago lost to humanity.

The thing is more brown than green, it’s been folded and handled so much that it feels like silk, and it smells like a sewer, but you don’t care because that thing can buy you a coke and a candy bar (this is back in the day we’re talking about after all). So you go out to the nearest gas station, and you hand that thing over to the wheezing, diabetic old woman watching the pumps like a hawk, like a sleepy, obese, rheumatoid hawk, and you walk out with a Dr. Pepper and a bag of Skittles to irritate the shit out of your parents with a sugar-induced game of hey, hey, hey, hey…hey, hey…pay attention to me, PAY ATTENTION TO ME!

You know what I’m talking about, right?

These are the only dollar bills that have ever made it to Zimbabwe.

It’s not like the country has a direct line of credit to the US mint. These things get passed around and recirculated ad nauseum. New money must come into the system eventually, probably through traveling diplomats, businessmen, and criminals (sometimes all three embodied in the same individual). It is, after all, relatively easy to transport bills internationally. The same cannot be said of coins. Anything below a dollar is paid for in rand and pula from neighbouring South Africa and Botswana.

They’ve set the exchange rate at 10 rand to the dollar, so it makes the math relatively easy, but there’s little to prepare you for paying for a drink and getting your change in three different currencies.

I’ve even seen quite a few $2 bills here. Most Americans, I’m sure, aren’t even aware that they still produce $2 bills. I have a few left over from when I was a kid, but using them in daily transactions is about as common as using the Sacajawea dollar coin. Can you even name who’s on the $2 bill?

There’s been some talk of reintroducing the Zimbabwean dollar, but after a senior politician (read: Mugabe) floated the idea at a recent political rally, the panic on the stock market forced the party come back and table it as a “long-term strategy.”

So grab all the trillion dollar notes that you can. One day they may be worth something. For now though, you’re probably better off drawing up your own money with a pack of crayons and some scrap paper. The resulting disaster may be valued by at least one person, which is more than can be said for the Zimbabwean dollar. 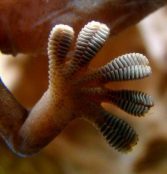