Of Old Gits and Hamsters’ Arses

Farage and Co. are not a bold rejection of the old order – they’re simply extreme expressions of it

There have been many articles about the rise of UKIP, as political journalists and commentators fight to understand just why this fringe party of nutters has done so well (in the sense that they control no councils and have no MPs, that is).

This is a contentious area, with battle lines drawn and no quarter given. But before you all start whingeing about how fascist 27.5% of the population is (which they kind of are), or how hoards of Slavs and Dacians are swarming into the UK (which they’re not), let me cut to the core of the problem.

To understand why a big slice of

the electorate voted for a party that’s

even more gormless and nasty than

the ones we’ve already got, you can’t just

assume it’ s down to stupidity or racism

National crazes reveal a lot about their population’s deepest impulses. For example, the current Japanese craze for Hamuketsu – literally, pictures of hamsters’ arses – is another symptom of its infamous Kawaii culture, where you can be both weird and childish, and not have to care too much about adult concerns. Concerns like Japan’s high suicide rate, its shut-ins, its pisspoor political class or the fact that nuclear power plants are built in earthquake/tsunami danger zones by pork-barrelling, incompetent morons with links to the fucking Yakuza.

Am I comparing Nigel Farage to a Japanese hamster’s arse? Kind of, but there is also a big difference. (He’s more like an enormous tapeworm draped with the freshly skinned pelt of a dodgy second-hand car salesman, in case you were wondering.)

To understand why a big slice of the electorate voted for a party that’s even more gormless and nasty than the ones we’ve already got, you can’t just assume it’ s down to stupidity or racism. It is far worse than that. Voting for UKIP is an act of haggard spite, like leaving all your money to your cat or having your grandkids over just so you can shout at them for a week. Britain’s national impulse is not infantile but geriatric. An embittered, vindictive and rather mad old git lurks within us all.

Not every old person is like this, of course, but many, many younger people are, and that’s the problem. 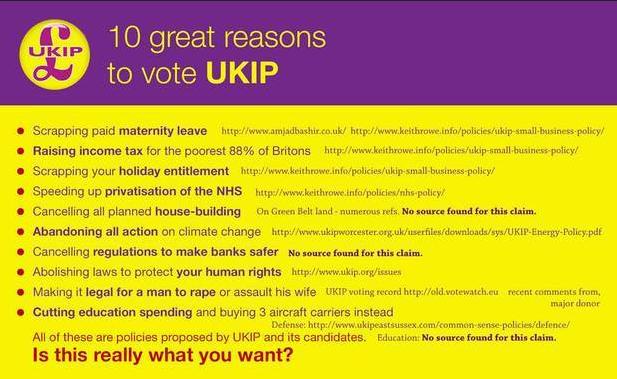 Indeed, our recent history only makes sense if we assume the nation’s inner old fart was in charge. How else to explain why that nice young man Tony Blair got voted in three times? Or the floral fascism that followed in the wake of Princess Diana dying in a Paris underpass? The blank eyed euphoria that accompanied the 2011 Royal Wedding? The ongoing success of TV talent shows with their tame naffness and sentimental sob stories? The unstoppable rise of The Daily Mail and its colonisation of public debate with its hate, hypochondria and voyeurism?

The Daily Mail is a hit precisely because it is aimed at mean old bastards who enjoy being horrible, and you don’t have to be over 60 to be one of those. Look at how we’ve gleefully swallowed the government’s rhetoric over spongers, ‘hard-working families’ and austerity. Good old fashioned fascism could never thrive in such cynical conditions, but a petty, penny-pinching and pig-headed authoritarianism would do very well. Arguably, every government since 1979 has aspired to this goal.

Which brings us neatly back to Nigel Farage. His faux bloke-down-the-pub image and superficial charm is akin to the sort of spiv who turns up at your Granny’s doorstep and cons her into buying a dodgy patio. His gurning rabble rousing, bigotry and dumbkopf appeals to self-pity both attracts and epitomises this old, bitter and stumbling mind-set that dogs our society because it is at its very heart.

Of course, the thing with an old git’s mindset is that it is consistently conservative, so the odds of UKIP profiting in the long term are small, as the Newark bi-election demonstrated. The nation’s voters will mainly turn out for the established parties because while lashing out is great fun, actually changing anything is enough to make us choke on our Ovaltine. This is why we are facing not just stagnation but regression. A society that clings to the status quo and treats others like dirt will not prevail in the long run. It will eat itself from the inside out and leave nothing but harm in its wake.

Of course, the thing about hamster’s arses is that they are boring. The front half, with its beady eyes and odd mix of industriousness and innocence, is always much more interesting. And the thing about the UK is that we’re missing the point too. We scapegoat the wrong people, even while the 1% carries on seizing bigger slices of pie and our society becomes ever more uneven, EU or no EU, immigrants or no immigrants.

With that in mind, Farage and Co. are not a bold rejection of the old order – they’re simply extreme expressions of it.

Spoof UKIP election image by Michael Abberton (for the ridiculous backstory to the image see https://www.trebuchet-magazine.com/ukip-turn-police-censor-twitter/)

Next Story:
Where are all the Penguins?