Optimus Primavera Sound reveals the line up of its second edition that will take place from the 30th May to the 1st June in the Parque da Ciudade in Porto. 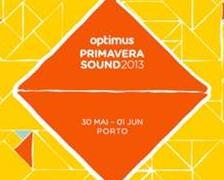 Twenty years with not a peep out of Kevin Shields, other than the rumour of hissy fits and spats with Alan McGee (ALRIGHT BIG MAN?), then all of a sudden there’s a new album, and gigs popping up. Luckily, the people at Optimus Primavera Sound have multi-decade memory capacity, or My Bloody Valentine might have ended u p with Savages in the ’emerging artists’ section.

Optimus Primavera Sound reveals the line up of its second edition that will take place from the 30th May to the 1st June in the Parque da Ciudade in Porto. The British band, Blur, the only name to be announced so far, will be joined by Nick Cave at the helm of one of the best oiled machines of cult rock: The Bad Seeds and My Bloody Valentine, the band fronted by Kevin Shields who will present the follow up to the mythical “Loveless”.

James Blake from London, child prodigy of British urban music, the Americans Explosions In The Sky with their futuristic post-rock, the legendary Dinosaur Jr., who still play an essential role in the history of indie music, the eternal pop dreamers Dead Can Dance and the New York band Grizzly Bear will also be big draws for this musical event. 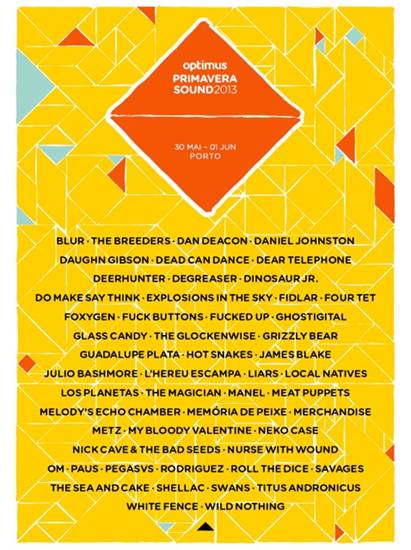 The long list of names doesn’t end here: Rodriguez, who was rediscovered thanks to the film “Searching For Sugar Man” will give his first concert in Portugal, Bradford Cox will lead the Americans Deerhunter, the avalanche of sound from the relentless guitars of Swans, the Deal brothers fronting The Breeders performing their mythical album “Last Splash”, the cult genius Daniel Johnston and the interactive live act of Dan Deacon will also be in Porto for the festival.

Optimus Primavera Sound keeps a close eye on what is happening on it local music scene as can be appreciated by the presence of the Portuguese band Paus and their passion for post-rock and experimental music, as well as other Portuguese bands such as Dear Telephone, The Glockenwise and Memoria De Peixe

Dance music and electronic pop always have their place at the festival with the sound adventures of Kieran Hebden with his band Four Tet, synth-pop from the Americans Glass Candy and new British house from the famous producer Julio Bashmore.

The festival also reserves space for quality emerging artists (Savages, Metz, Daughn Gibson and Merchandise) and for artists with a cult following: the experimentation of Nurse With Wound, punk rock from Hot Snakes, post hardcore from the Canadians Fucked Up and classics of alternative American music Meat Puppets.