Who Left the Ichthyosaur in The Storeroom Again?

Those are the usual things you can expect to find in an underused workplace storeroom.

A new species of ichthyosaur? You’d really have expected someone to have remembered where they left that.

A new species of ichthyosaur has been identified from a fossil that has been in the University of Nottingham’s engineering collection for over half a century.

The University’s specimen, announced today as Protoichthyosaurus applebyi, is a holotype – the valuable original specimen that describes a new species. It is the first known fossil of its kind anywhere in the world, which makes it even more scientifically significant.

Dr David Large, a geologist and Head of the Department of Chemical and Environmental Engineering, who joined the University in 1995, had used the specimen for teaching and outreach work while visiting primary schools to encourage children to explore science and engineering. The fossil, which was a hit with children, had faded into obscurity and was forgotten about for years. However, it was rediscovered not long ago, sitting on a shelf in a storeroom. Recognising its rarity and uniqueness, Dr Large retrieved the fossil and his effort enabled palaeontologists and scientists to study the specimen in greater detail.

Dean Lomax, a palaeontologist and Visiting Scientist at The University of Manchester, contacted Dr Large in 2014 while searching for another ichthyosaur fossil and was unaware that the newly-found specimen even existed as it had not been scientifically examined before. Eventually it was determined that this specimen is of a species new to science. It has been hailed as a major step in uncovering Britain’s early fossil past and understanding ichthyosaur evolution.

Dean recently published his findings on the fossil in the Journal of Vertebrate Palaeontology in collaboration with Professor Judy Massare of State University of New York, USA, and Rashmi Mistry, a former student at the University of Reading.

He said, “This ichthyosaur is an essential part of Nottingham’s scientific collection and I’d like to thank David for bringing it to my attention. As part of our study we have identified over 20 specimens of Protoichthyosaurus, but only one example of P. applebyi, making this the only known specimen recorded so far. I’m confident that there will be more out there. 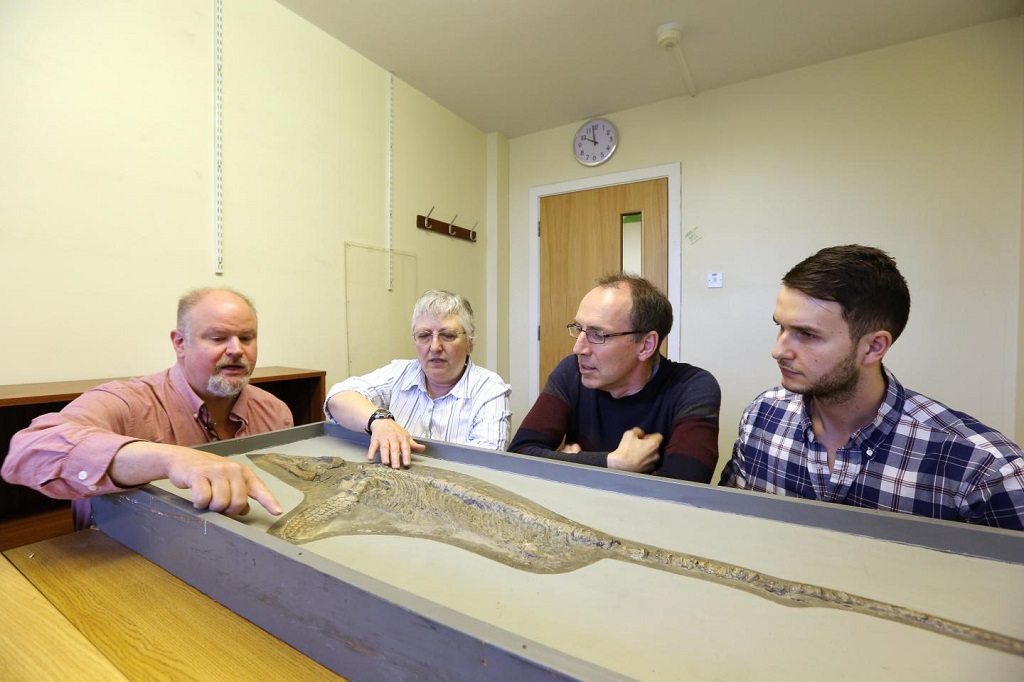 This particular ichthyosaur dates back to the Early Jurassic period and lived around 200 million years ago. As part of the wider study, Protoichthyosaurus has improved our understanding of the evolutionary changes in the forefins of ichthyosaurs, which set it apart from other species. This small- to medium-sized species would have probably been less than 2m in length, swimming in large numbers in the seas around Britain when the dinosaurs roamed the land.”

Professor Andy Long, Pro-Vice-Chancellor, Faculty of Engineering said, “I am delighted with today’s announcement that a new species of ichthyosaur has been discovered in the University’s collections. This is not the kind of thing that engineering faculties report every day and it’s the first time that our Faculty can claim to have discovered a new species. David’s passion for geology helped him to recognise the fossil’s importance. The Faculty has carefully restored the fossil and categorised it with information on what it is, where it came from and how it lived.

“We get visiting researchers from all over the world to share their expertise with our staff and students, including Dean and Judy who came to examine, photograph and document the specimen in greater detail. All these studies form the basis of a constantly growing research effort here at Nottingham.”

Dr Large added, “When I first saw the fossil, I knew it was special and I am delighted that Dean has confirmed just how special it is. A new species of ichthyosaur is exciting and this particular one is a unique example of its kind. The fossil was a great way to introduce a young audience to science and it got many children asking the right questions about palaeontology. I’m delighted that we saved the fossil and it’s been great to have the faculty’s support in bringing this specimen to a wider audience. We’re now using the latest technology to find out more about this unique animal.”

The University’s fossil is named after Dr Robert Appleby, the palaeontologist who first announced the discovery of the genus Protoichthyosaurus in 1979.

This ichthyosaur is now on display as part of the one-time only world exclusive Dinosaurs of China exhibition at Lakeside Arts. The exhibition emerged from the research carried out by Dr Wang Qi, an Assistant Professor in Architecture who specialises in exhibition and museum design.

There are plans for the fossil to undergo CT scanning to create detailed images which can be studied further in addition to casting and 3D printing to fill in the missing parts.

Previous Story:
How do you know if you’ve never tasted it?