Less great news: it’s made from chopped-up trees, and trees are about the only thing keeping the planet habitable. But let’s gloss over that, there are sustainable ways of producing sawdust.

Let’s hope there’s plenty of the stuff available to mop up all those 176,000 gallons of oil spilled at the North Dakota Pipeline yesterday.

Lowly sawdust, the sawmill waste that’s sometimes tossed onto home garage floors to soak up oil spilled by amateur mechanics, could receive some new-found respect thanks to science.

Researchers at the Department of Energy’s Pacific Northwest National Laboratory have chemically modified sawdust to make it exceptionally oil-attracting and buoyant, characteristics that are ideal for cleaning oil spills in the icy, turbulent waters of the Arctic. The nontoxic material absorbs up to five times its weight in oil and stays afloat for at least four months.

“But as ice retreats in the Arctic Sea, fossil fuel developers are looking north, and we need new oil spill response methods that perform well in extreme conditions,” added Bonheyo, who also holds a joint appointment in bioengineering with Washington State University.

“The chance of an oil spill in the Arctic is real,” said fellow PNNL microbiologist Robert Jeters, who is also part of the project. “We hope materials like our modified sawdust can help if an accident happens.”

The modified saw dust pulls double duty. Beyond absorbing oil, it also enhances another approach to combatting oil spills – controlled burns. If changing weather or tides move spilled oil toward a sensitive area fast, oil can be burned before it can cause further harm. Called in-situ burning, the practice can significantly reduce the amount of oil in water and minimize its adverse environmental effects.

Bonheyo and his team looked to develop an environmentally friendly and inexpensive material that floats despite rough or freezing waters and can support in-situ burning. Not wanting to create more pollution if emergency responders can’t retrieve oil cleanup material, Bonheyo’s team considered other natural ingredients like rice hulls and silica. But they ultimately found their winner in a fine dust called wood flour. A woodworking byproduct, wood flour is often used to make wood composites.

To make the dust into a thirsty oil mop, researchers chemically attach components of vegetable oil onto the material’s surface. These attachments make the modified material oil-grabbing and water-shunning. The final product is a light, fluffy, bleached powder. The team is also trying out adding tiny, oil-eating microbes – fungi and bacteria – to the powder’s surface so any left-behind material could naturally break down oil over time.

Applying the modified sawdust is simple: sprinkle a thin layer over oil on the water’s surface. The material immediately starts soaking up oil, creating a concentrated and solid slick that stays afloat thanks to the material’s buoyant nature. The oil-soaked material can either be burned or retrieved. 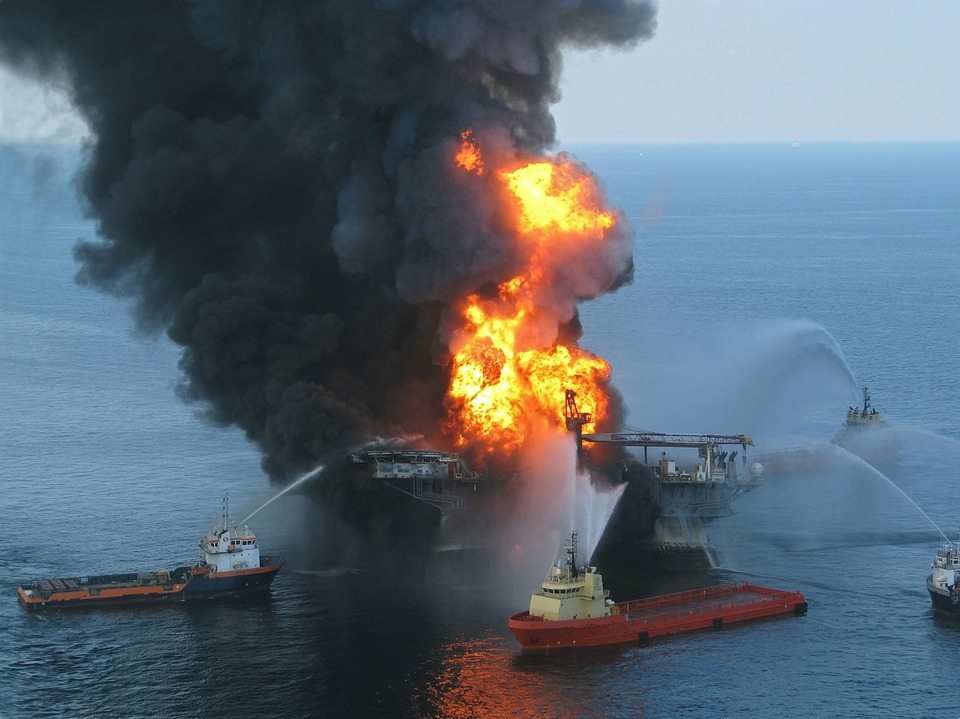 gton to evaluate the material in icy waters. The facility is a customized shipping container that cools down to as low as 5 degrees Fahrenheit, which prompts researchers to don snowmobile suits and ski masks while they work. Ice slush forms on the surface of water that circulates inside a 290-gallon raceway pond placed inside the bitterly cold lab space. Oil is spilled on the slushy surface, followed by a sprinkle of modified sawdust. Tests have shown the material’s water-repellent nature prevents ice from forming on it, allowing it to soak up oil and remain at the surface.

In the coming months, PNNL will further evaluate the modified sawdust. The material will need additional testing and approval by multiple agencies before it can be used at actual oil spills.

PNNL is developing the material for the Department of Interior’s Bureau of Safety of Environmental Enforcement. BSEE is the lead federal agency charged with improving safety and ensuring environmental protection related to the offshore energy industry, primarily oil and natural gas on the U.S. Outer Continental Shelf.

Previous Story:
Two Faces, One Evil: The Bi-Party Sham of US Democracy

Next Story:
The riffs still come from my fingers (Tommi Holappa, Greenleaf)