Mindkult, No Funeral and Livid (Reviews)

Morbid, Miserable and Doomy as a 1990s first-person Shoot ’em Up.

The experience may bring back sad memories of childhood; you waiting in a field for Gary to turn up with his football. Gary doesn’t show up. You end up vandalising a bus shelter. Tragic times. And yet this is where Monolord has left us, because we were meant to get their album and, err, didn’t. So until we do, try to imagine what it might sound like, and then roleplay what the review would say. It’s a cheap and economical alternative to virtual reality, but I digress.

Let’s move on instead to the debut album by Virginian doomsters Mindkult. Lucifer’s Dream immediately reminds me of one of the great sadnesses of life these days: the death of the record label promo. By that, I mean the promo CD, and prior to that, the promo cassette and the promo vinyl. You still get promos, of course, but they’re streams to be downloaded. All the fun of slapping the album into your player, or spinning the turntable, has gone. Also, you could flog them at the nearest record collectors’ shop afterwards and… I didn’t say that.

Instead, you are left sitting in your corner, plugged into your headphones and laptop like a massive introvert, torn between sweet music and looking up cat pictures. True, music hacks are massive introverts, but you don’t want to encourage us.

The reason for that micro rant, of course, is that Lucifer’s Dream is an album made for speakers and amplifiers, not the pisspoor internal speakers of an iPhone (prior to you dropping it down the toilet, or the Steve Jobs posse bricking the OS out of commercial spite). It’s lead-heavy, morbidly psychedelic and full of wonderful solos and glorious grooves. “Drink My Blood”, the intro goes, unleashing the band’s sound and only then feeding in some wonderfully ethereal vocals. This is the core formula that the band sticks to throughout, and for the most part, it works very well.

“Behold The Wraith”, meanwhile, slows it down and lets the forlorn crunch of the music plod along with the aforementioned haunted howls. Finally, “Lucifer’s Dream” chugs and wails in equal measure with the certainty of a funeral and the echo of a spectre. It’s a fittingly good ending, for something that dwells so much on the morbid side of the spectrum.

One word of caution, however. The Mindkult sound owes an obvious debt to Reverend Bizarre, Uncle Acid (and, presumably, his deadbeats), and Electric Wizard. That’s sort of to be expected in doom these days, but it can be jarring to hear these influences being so… blatant. On the other hand, out of this mix the earliest hints of a unique sound have taken root. It’s a good start. Just play it loud, like it was meant to be. 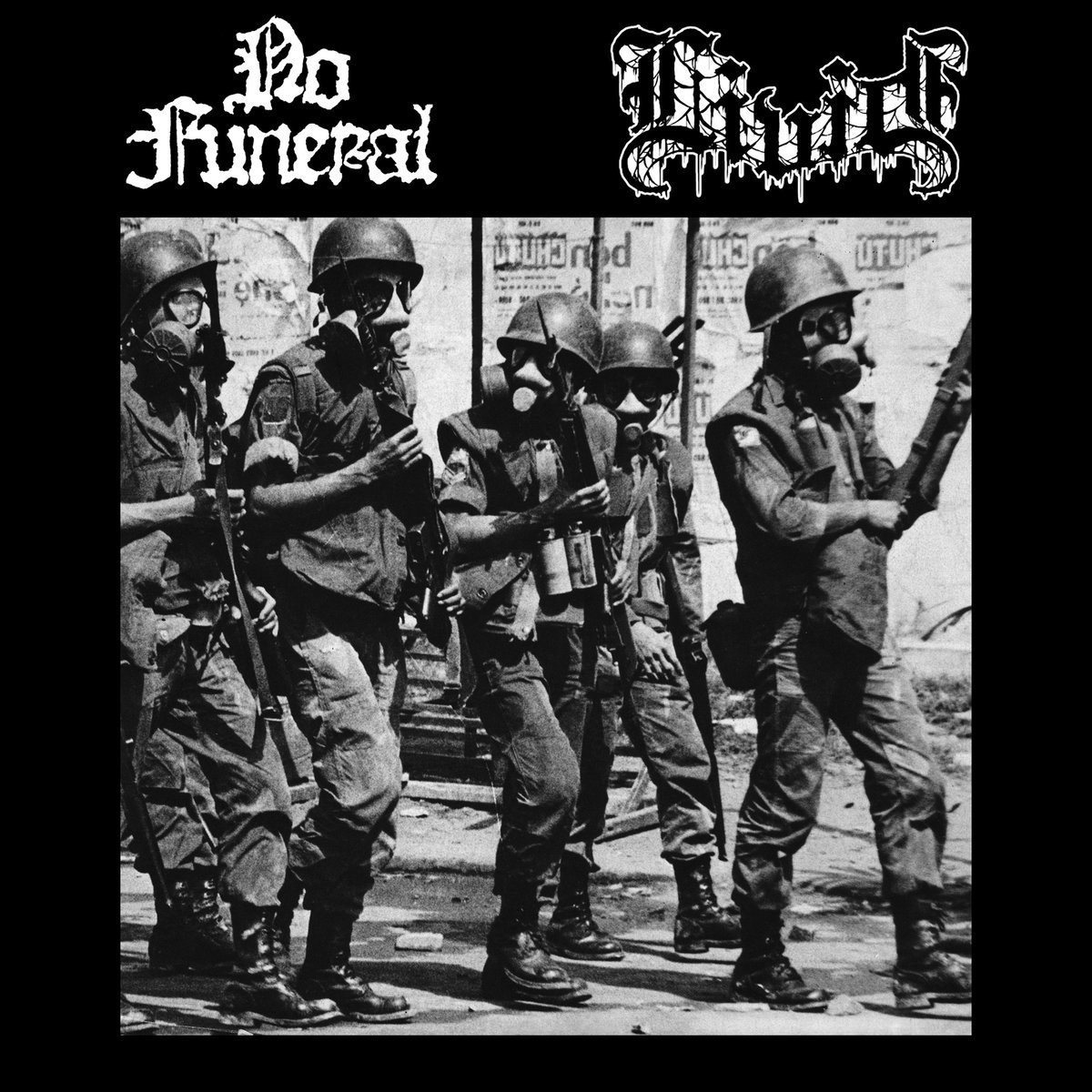 and Livid. The split is not even – No Funeral gets two of the three tracks to play with. “Infection” lumbers forth like a really fucking miserable steamroller, the monotonous surge kept vital by some compellingly good riffing and a strikingly effective use of drums. “Disease Brought By Depression”, apart from being the most gratuitously miserable song title ever, starts out with an enjoyably sinister ambient section, keeping it original. It then embarks on another journey into sludge, but with a funeral doom undertone that also sets it apart from other examples of the genre. Once again, the riffs and grooves take root and the song drags you along with it, like so much detritus dredged from the bottom of a very muddy river. It’s great fun, if that really is the best way to describe the experience. Crushingly heavy and yet addictive and engaging.

Livid’s contribution to the split, “False Hope” (this is not a chuckle-fest – you may have noticed that by now), starts with a suitably desolate intro, but launches into something more melodic, forlorn and strangely effecting. Its riffs remind the listener of Paradise Lost’s “Gothic”, despite the glacial pace, but with a grandeur and sweep that verges on the epic. True, the vocals have too much echo and seem a bit too distant, but the guitars are the real stars of the show here. While the band sticks to a simple hook for the most part, it is able to work in some well-timed variety, stopping it getting too monotonous. The only problem – common to the genre, of course – is that its 18 and a half-minute length means it can’t be enjoyed without a commitment on the part of the listener. What the split does, in any case, is make you want to hear more from both bands.

Next Story:
How Much Does Your Mind Wander at the Wheel?