[dropcap style=”font-size:100px; color:#992211;”]C[/dropcap]
ivil War are a Western-obsessed quartet of Swedish madmen, some of whom have previous form in Sabaton.

Sweden does, of course, have form for this sort of thing – as anyone who has witnessed the Swedes’ bizarre Deep South subculture, Stars and Bars and redneck fancy dress aplenty, with nary a twinge of how dodgy it all is….

But how best to describe this faintly unhinged power metal romp The Last Full Measure? Perhaps we should start with the vocals, which sound like an asthmatic with his nuts caught a crocodile’s jaws. Or perhaps the cheesefest organs? The polka sections in one track, “Tombstone”, which suggest some serious drug use? Or the pisspoor rhyming couplets in that song and others, like “Doc Halliday/Had a very lousy day”?

There is that faint but uncanny sense that the mickey is being taken here, given the sheer naffness of it all. But what is even more disturbing is the sense that the band has no sense of how funny it all really is. We’re talking William McGonagall levels of obliviousness here, Bridge of Tay and everything.

The possibility of it all been taken seriously aside, The Last Full Measure can be best described as a fun album, but not a very good one. It’s at least superficially catchy, and nails one or two decent hooks, such as on one song, “America”. The rest of the album, if not undistinguished, is not dizzyingly inspired either.

Which brings us, neatly, to the new album by yet more Swedes, the legendary heavy metallers HammerFall. Now, I have form with this band, or at least my warped imagination does. You see, for a very long time, I have referred to HammerFall as ‘HamsterBrawl’. Furthermore, I’ve always imagined the band to consist of violent hamsters that turned to classic heavy metal as a way to stop beating each other senseless. 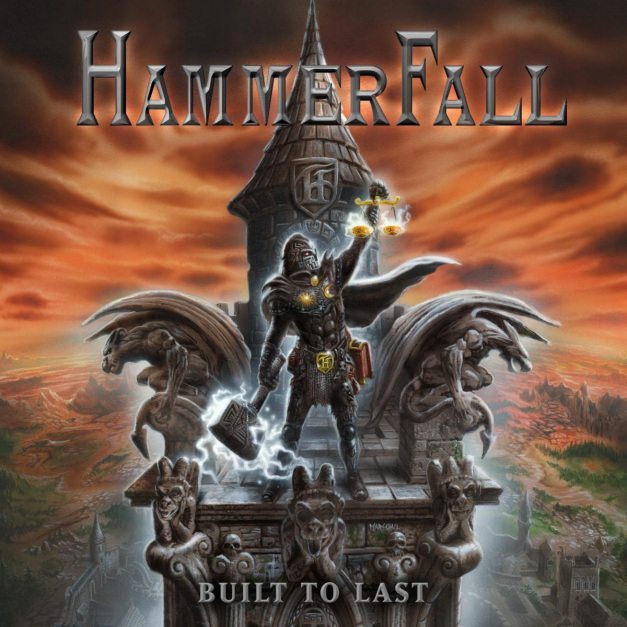 Needless to say, this adds a whole new spin to songs such as “Legacy of Kings” and “Glory To The Brave”, rejigged by my increasingly warped imagination into ballads of the time when rival factions of Syrian and Russian hamsters shed blood over a brutal power struggle for the empty Hammy Allthrone.

So anyway, the band’s new album, Built To Last.… In many ways that title (and title track) get to the heart of the matter. After all these years the band’s formula remains sturdy, but stifling. It isn’t a bad album, by any stretch. But it is also an album with absolutely nothing more to say. For the most part, it’s an OK HammerFall album with no surprises, going through the motions in a sort-of-OK fashion. Lacking the brief spark of inspiration behind the band’s first two albums, it is a load of riffs and tropes looking for a purpose but then settling back into a nice, cosy rut.

If you enjoy lacklustre things, then please do go ahead. Personally, I found myself listening to Thin Lizzy afterwards. It felt like a necessary palate cleanser, like I needed to hear old fashioned metal/rock, but with actual blood flowing through its veins.

Previous Story:
Earworms: A Guide to Making Them, And Getting Rid of Them